Move Over Twitter. Snapchat is the Newest Social Recruiting Strategy 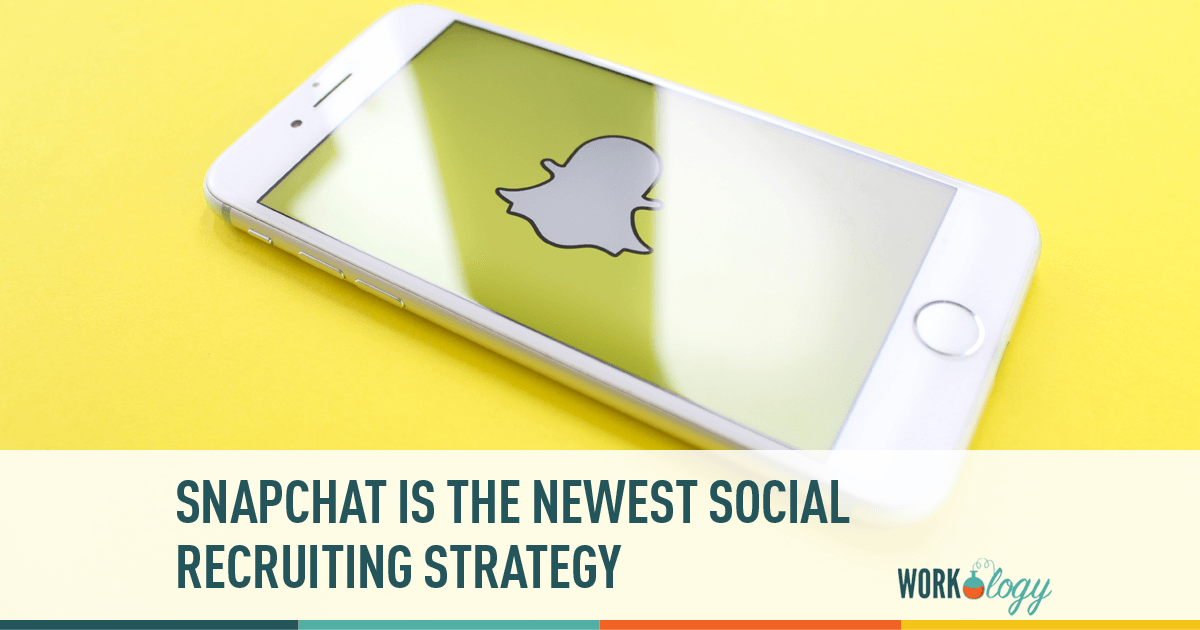 Snapchat is a great tool to share with friends and randoms quick photos and now video quickly. The photos or video disappear as a pseudo guarantee that the physical evidence will be erased. Except that there’s this thing called screen capture so Snapchat is limited in it’s use case as far as keeping your photo and video secrets from living forever on the interwebs.

As a 30 mid something adult I don’t use Snapchat other than a few times a month. I’m not sharing any photos or things that I’m scared of sharing.  Maybe that will change, but I sure as hell won’t be using Snapchat to keep those secrets. I guess I’m old fashioned because I like a little mystery. Also, nobody wants to see Snapchats of my 5 year old who just lost her first baby tooth. That’s not really a scandalous event or something that wags tongues if you know what I mean.

But for companies that are recruiting young professionals and teenagers to their organization, there’s something about using Snapchat as a recruiting and employment branding tool that might be appealing. One of the first companies to successfully use Snapchat is an Irish Pub called Sober Lane which announced on Twitter they were opening a new pub urging their followers to follow them on Snapchat and send a video or photo that urges users to make an impression if they want a new profession. An interesting call to action, however, what’s more interesting is the response they received. They received over 2,000 videos using the service as a video interview introduction and screening tool and plan to hire about 20. This is what I love about gorilla recruiting efforts. Their strategy was at no cost and generated a ton of responses from candidates as well as media from all around the world for zero dollars. That is simply amazing.

I won’t get into the potential employment law implications using Snapchat and their lack of storage and compliance purposes in the US because this company is in Ireland not the United States. However, the 2,000 video introductions disappeared like they do in Snapchat. If a candidate in the US wanted to file a complaint with EEOC, the employer would have no physical or hard evidence. There is no case law at the moment to support this, however, I believe the OFCCP considers a candidate as someone who expresses interest in the role. Typically, they do that by applying for a job. However, a video introduction using Snapchat opens up an entire other world of legal ramifications and possibility. Dont’ even get me started on data security.

You can see Solar Lane’s Twitter announced that they were accepting applications below encouraging their users to move from one platform to another. It’s important to note they didn’t just rely on 140 characters to share that they were hiring. I love that fact alone and it’s why I’ve been supportive of Dice’s involvement in testing the new Twitter Job Card. Solar Lane focused on visual aspects which Twitter tells us is key in getting Twitter users to read, retweet, and engage in their 140 character community. Sadly, Twitter’s embedded tweet function which I used on this blog post doesn’t allow for the preview of the graphic like you see when you visit Solar Lane’s Twitter account. Click on the link below or here to see what I mean.

Sober Lane D4 now hiring, applications via SnapChat only “SoberLaneD4”. Make an impression if you want a profession. pic.twitter.com/XsEq68k4Uo

Not every company might set out to use Snapchat as their next new recruiting and hiring HR technology go to, but what’s equally important is the Snapchat recruiting strategy which I first wrote about last year. Most importantly was the community that Sober Lane developed on Twitter. They created conversation and provided candidates and fans a unique way to engage with the company and the social media properties.

Recruiting teams should leverage the social aspects and focus on quick hits that go beyond more traditional media. Visual media is sometimes more powerful. That’s video, photos and infographics. These are great ways to engage an audience going beyond just a standard resume and application screening process. It’s what Zappos is trying to do with their Inside Zappos talent network. The part I believe they are really missing out on is the engagement factor. Their community, like the traditional ATS still serves as a black hole for job seekers. Companies including Zappos need to break out of the “Don’t call us. We will call you mentality.” The recruiting process is a conversation, a relationship and involves the sharing of resources, information and conversations. It can no longer be one way.

In the coming weeks I’ll write more about Zappos and their new “Inside Zappos” zero job posting model, but let me just say that the success of future recruiting efforts requires work. It’s a relationship and social media and technology are moving us as recruiters to where both sides need to engage to keep the relationship committed and healthy. It requires a constant engagement that is interesting, insightful, creative and always changing. Good candidates have options. They like to feel special, and companies of recruiting teams should be considering these things.