Trucks Are Already Being Automated 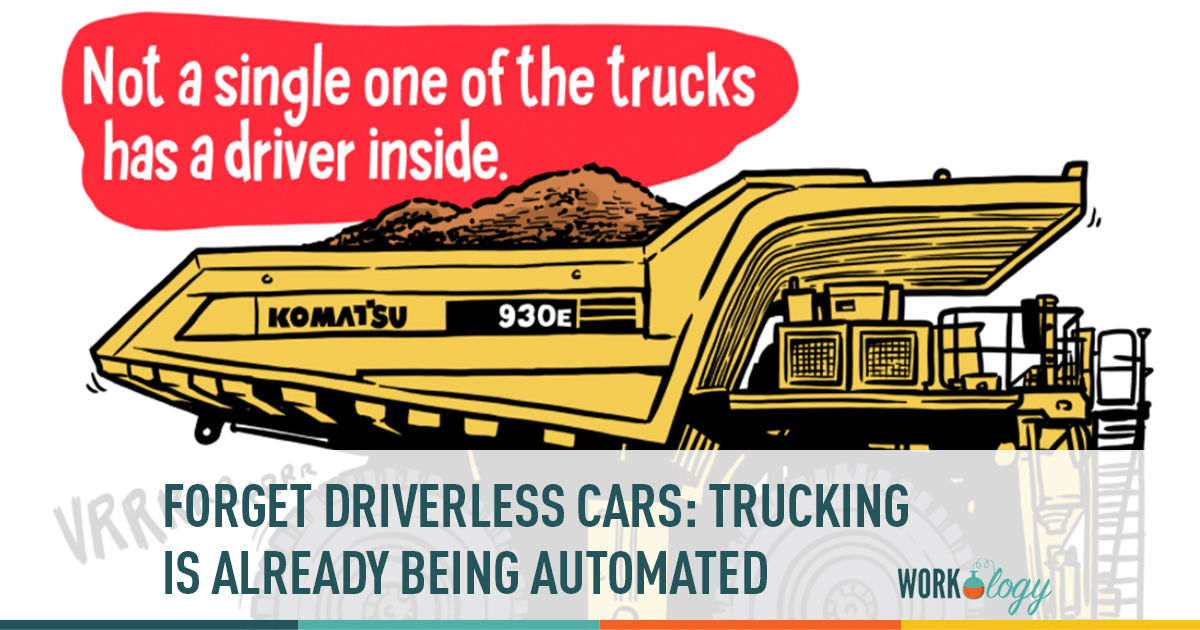 As Uber, Google and others experiment with driverless cars, worries mount that fleets of driverless taxis, though probably safer and more efficient, will mean eliminating thousands of jobs. But these stories crowd out the already in progress automation of trucking, which, if extended to every part of the trucking and transport ecosystem, might mean eliminating a much larger pool of hard-to-replace, blue collar jobs. Over at The Nib, Andy Warner tackles automation in industry and transportation.

Employment in mining continues to shrink in high GDP countries — not so much because the sector itself is shrinking, but because the use of technology dramatically shrinks the number of bodies needed for extraction, processing and transportation. This is both profit and safety motivated. Cut jobs and you cut labour costs — but you also bring down your risk of on-the-job accidents and longterm liabilities from workers being exposed to potentially dangerous work and substances. Warner’s comic looks at how automation in the Australian West Angelas mine has dramatically boosted efficiency. The Komatsu made automated trucks used at West Angelas can collect, transport and delivery materials all day and all night long. They don’t need breaks. They don’t need pep talks. They just need to be serviced regularly. And they’re 15% cheaper than using human loaders and drivers.

Komatsu trucks, in operation in mines in Australia and Chile, have already hauled about 1 billion tons of material. They’re just one small part of an increasingly automated sector. As Warner notes, in West Angelas, Komatsu trucks operate alongside automated rock breakers and drills, all of which are monitored at a remote command centre — by humans. While it’s true that employment in resource extraction and manufacturing is shrinking, it isn’t being eliminated. Many of the jobs made necessary by automation aren’t one-to-one replacements for those eliminated, but they are interesting and potentially better paying opportunities for blue collar workers — if they can access training.

As Warner points out in his comic, and as Mike Haberman explored last week here on the blog, no fully automated system is really fully automated. That is, somewhere in that automatic system, there are humans monitoring and adjusting the machines, programming and debugging and providing that all important human touch, be it b2b relations or frontline customer service. While Mike looked at human employment in the transitional phase to full automation, like Warner, I think that there will always need to be a human element.

Deborah Lockridge, editor of Heavy Duty Transport, who whom Warner interviewed for his comic, says that “It would not be so much job loss as lack of job growth. The trucking industry is growing and needing more drivers all the time.” Across the US there is a huge talent shortage in the trucking industry, both in long and short hauling. It’s the most common job in at least half of US states. Automation could slow down that growth but it could also improve conditions for drivers and make the industry as a whole more efficient. Automation would allow long haul drivers to sleep more and would probably cut down on accidents caused by overtired truckers rushing to meet deadlines. Automation is already allowing European trucking companies to organize better and safer convoys, where groups of partially organized trucks travel in platoons, and drivers take turns sleeping and guiding. Too, truckers do more than just drive from point A to point B and automation may allow room for them to focus on accuracy, efficiency and quality than on deadlines — making truckers themselves more valuable to transport companies.

Perhaps the saving grace for drivers is that, as Warner says, professional driving is actually pretty complicated. Where container ships and shipyards are whittling down their labour costs to the tiniest pools possible (staffing on ships can run as low as 5, depending on the type of shipping being done and pertinent regulations), and mining is cutting blue collar jobs year over year, ground transport may not be able to do the same. What container shipping and mining have in common is fewer human interactions. Container ships go from port to port on highly regulated international shipping lanes that, while busy, can’t match the chaos and confusion of a road. Mining and other resource extraction industries too, while busy at the site, involve far fewer moving parts than your morning commute. Customer service and complex human interactions have proven difficult to automate, so what may save human jobs is, well, humans.