Trends Are the Active Pulse of Our Recruiting Present 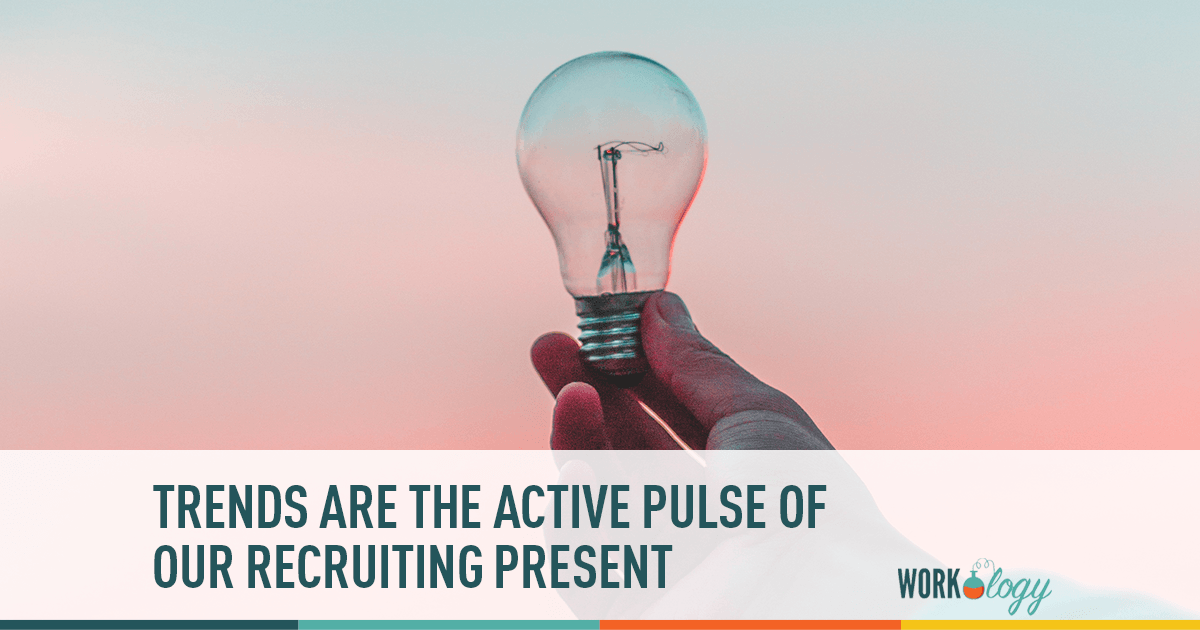 Recruiting Trends Week is upon us! Each day, everday this week Blogging4Jobs is taking it to the streets to find out what trends will be “the trend” in recruiting. What do you think? What trend do you see as #1 in 2014? Let us know here! Elevate your brand and HR & Recruiting practitioners. Learn more about sponsoring a future themed week on Blogging4Jobs by clicking here.

I love trends, short and long-term. I can’t wait to see the pictures of a dazzled recruiter suddenly surrounded by a flock of fabulous candidates wearing Google glass; or to watch her face at the realization that new methods for human interaction with computing systems are not only redefining interpersonal interactions but can also maximize productivity in the workplace, that the huge early strides of the new forms of contingent work-arrangement are reinventing the very notion of individual skill sets… This is not fantasy. The “Age of Context,” to use the title of a great book by my friends Robert Scoble and Shel Israel, is here, and it is more compelling than the 1964 predictions of Isaac Asimov for 2014.

Trends are in the invigorating forces of the real world, a reason to marvel at the continuous newness of our lives… except for the people who chose to freeze the Clock of the Long Now on the year 2000. There can’t be trends for them, only mysterious countercurrents continuously sending us back to the past. Or so it seems based what I heard at a tradeshow last December where Lou Adler was telling the audience that our industry has experienced “the same systemic issues for the last 13 years,” “the same awful numbers” and that “current technologies only serve 17% of candidates.” Obviously discussing the past was a hot ticket… The room was full.

Thirteen years. Well, fourteen years now…  This means that some organizations still live in 2000, a year that represented the exciting future for decades, and at which point time has since seemed to freeze in HR. Let me put this technological stalemate in context: Realize that this amounts to using Windows 2000 and Internet Explorer 6, or Mac OS 9, or Oracle8i, and being unable to tap into any of our favorite social networks. Imagine still using the Nokia 3310, which, albeit amazing at the time, would hardly qualify as a smart-phone today. A Rio PMP300 was the ultimate in MP3 players in 2000. It was the year Blockbuster declined to purchase Netflix for only $50 million (and maybe a major reason why they started their decline). So many things have become obsolete since 2000, from paper maps to phone books, to PDAs and floppies! Isn’t it scary to think that while we have all moved on in our daily lives, there are people trying to deal with decade-old “systemic issues” in the same way, and that nobody will address them with a new perspective?

Are pundits doomed to cry out in the wilderness, with no means to effect change? Or is the problem that too many people and organizations have too much vested interest in ensuring that the same problems will last forever, just as doctors in the thirties were afraid that penicillin would kill their business? What is driving such a status quo?

2014 is only starting, so let’s be optimistic! It’s never too late to catch up. Maybe the next trend in HR shouldn’t be to contemplate anything related to the future, but simply to set our sights on our fascinating present and all the new products that can improve the sourcing and hiring processes by an order of magnitude. Sometimes, “it takes a long time to grow young,” as Picasso once said to his friend Jean Cocteau. But, it’s not really hard. Think about how much we can accomplish the minute we start looking at the world with the eyes of our children or any young adult we know. Talk to Millennials! Their enthusiasm is contagious and energizing.

PS— This post was inspired by a Satchel Paige (1906-1982) question posted by John Hagel on Facebook: “How old would you be if you didn’t know how old you are?” Photo Credit: Job interview of the future (1959 edition of Arthur Radebaugh’s Closer Than We Think)

Marylene Delbourg-Delphis (@mddelphis) is the co-founder and CEO of TalentCircles. One of the first European women to found a tech company in the Silicon Valley, she launched a bestselling relational database (4th Dimension) at ACIUS, co-founded with Guy Kawasaki. She later became the CEO of Exemplary Software, a lean supply chain management system (acquired by Persistent Systems) and Brixlogic, a platform for the native implementation of XML Schemas (acquired by Diebold). Throughout her career, Marylene has assisted about thirty young companies as a shadow CEO, board member, or investor. She has hired a lot of employees (and fired a few too!).