Transforming In-Office Jobs to Telecommuting & WHY? 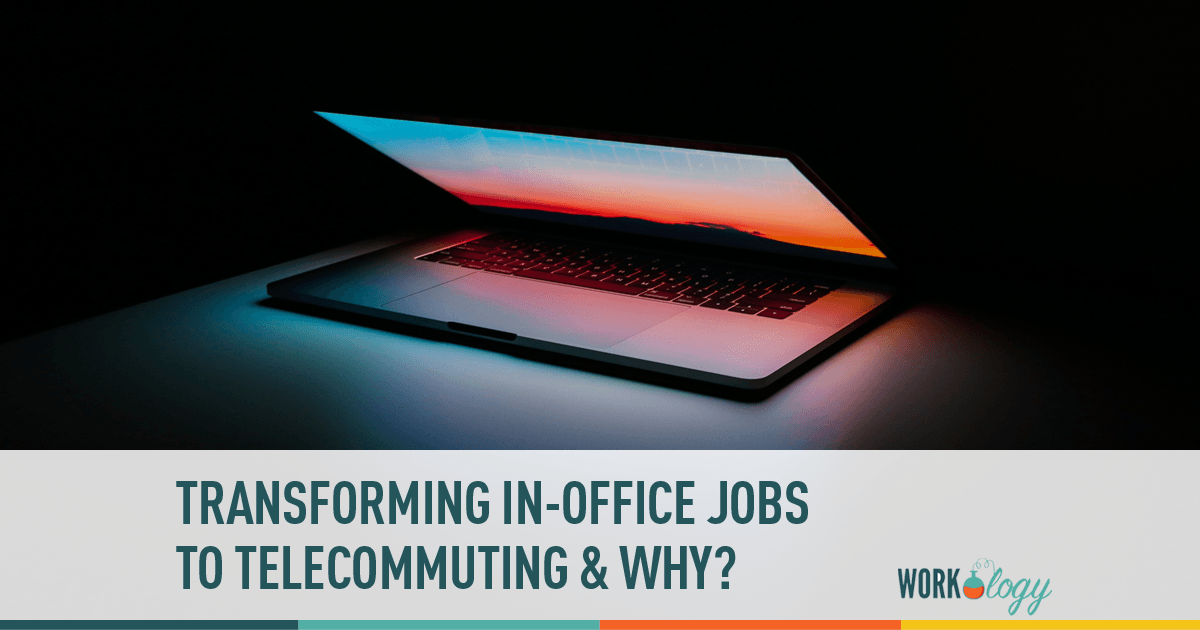 Yesterday Mike Haberman wrote about the “Gig” Economy on Blogging4Jobs and gave some good points on why it could possibly be the future of the workforce. His reasoning was that companies like TaskRabbit are creating a marketplace for consultants and freelancers to pick up odd jobs to basically stay out of the 9-5 workforce. Companies like elance boost a membership of over 8 million members (this only came after elance and oDesk merged in late 2013).

Mike’s post got me to thinking that as millennials enter the workforce it’s no secret that the 9-5 job doesn’t work for them. They want the freedom to be entrepreneurs and create their own work schedule. Telecommuting is an extremely popular way of working for my generation (and other generations!) and is basically a goldmine for those that don’t want certain restraints on them that a physical office environment would entail. They want to be able to work from 10p to 3a instead of getting up extremely early only to spend the first 2 hours waking up.

So what does this “Gig Economy” mean for the HR practitioner?

When creating a new position for your company it’s important to look at the type of job your hiring for and ask yourself, “Can this same job be done while telecommuniting?” If the answer is yes, you’re likely to not only increase your candidate pool, but the strength of your candidates. There are candidates out there who excel in office-only work environments, but if you look at the trend in the workplace, being able to work from home is a tasty perk. The problem with telecommuting is that most see a disconnect in those working from home versus from those working in the office, but with new technologies out there, employees are still able to be apart of the company’s culture. As an HR practitioner it’s important to look at the benefits of offering off-site work versus having an employee come into the office day after day.

Most don’t equate productivity to telecommuting because there are so many distractions in a home office work environment, but according to research done at Stanford University, telecommuters are 13% more productive then those work in an office environment. When I worked in an office setting I would arrive to work between 8-830a, check my email, mess around on the Internet till about 10a, work from 10a – 1130ish, take an hour or hour and a half lunch break, maybe get 2-3 hours of good solid work done in the afternoon and be out the door by 430-5p.

The mundaneness of working in an office environment isn’t for everyone, especially the creative, entrepreneurs. Now that I work from home, I have a much more balanced work/life and I am able to be productive in burst around the clock instead of shutting down at 5p. Sometimes I’ll sit down at my computer at 9p at night and work till 1 or 2a in the morning with very few distractions, on top of all the work I put in during the day. Productivity is one of the many reasons why practitioners should start thinking outside the box when it comes to hiring.

How to make an office job into a telecommuting one?

Not all jobs need to be in the office and there are limitless perks to transforming an office job into a telecommuting job. With the introduction of video interviewing there are now ways to prevent companies from having to fly people in for a job or perform in-person interviews. As the practitioner it’s important to look at the bottom line and benefits of hiring a different type of workforce that your company might not be used to.

Look at the core functions of the job.

Does the job you’re hiring for absolutely require the person to be in the office? Jobs that rely on minimal collaboration such as a web developer, graphic designer, researcher, insurance appriser, and customer service agents are all jobs that can be done via telecommuting. If the person is rarely in the office (like a salesman) on the phone all day (account representative, customer service agent, etc.), or isn’t interdependent (like a researcher, etc.) it generally means that your company can save time and office space by allowing these employees to telecommute.

Do tools exist to replace the office?

The fact that company culture can be built offsite, collaboration can be done in the cloud, and there is reasearch out there that proves working from home is more productive (for most, not all professions) makes me wonder why companies don’t offer up an alternative to working in an office environment. There will always be issues of customer privacy, etc, but for alot of these jobs everything is done securely on the cloud and can be accessed almost anywhere.

Think about the benefits of taking a job from the office to the home when you open up your next requisition and see that you’ll end up finding a higher level of quality candidates. I also forgot to mention that telecommuters have a lower turnover rate.