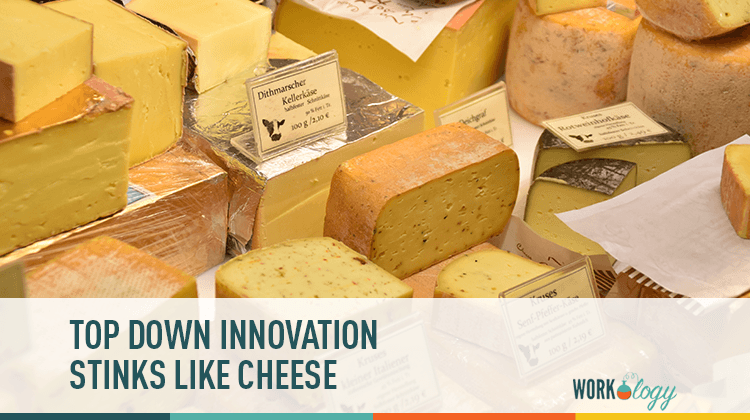 According to Clayton Christensen, co-author of The Innovator’s DNA, questioning is one of five skills demonstrated by innovators.  Thank goodness because now I can be ok with the fact that I find myself wandering around the grocery store analyzing the origins of products or questioning the intent of various marketing strategies.  Last week I was stumped by a good one!

According to Wikipedia “there is no conclusive evidence indicating where cheesemaking originated”.  Let’s take a moment to really think about this one.  We are talking about bacteria thriving in milk to the point that it hardens and in some cases stinks!  Regardless, somehow this innovation tipped the scale of collective acceptance and became adopted as a dietary staple all over the world.  There must be a story here.

I’d imagine that it started with a small community and maybe even by accident.  Someone was daring enough to put that accident in their mouth and discover the taste to be pleasant.  Or maybe cheese came from the need to store milk for longer periods?

My hat goes off whom ever figured it out.

Now, imagine cheese being invented today in a large organization.  Think about the legal implications of putting bacteria into milk as a brand new concept.  Did you know you that it is illegal to sell raw milk in some states?  Im not kidding!

Let’s say you do come up with the idea of cheese.  How do you get it adopted internally when efficiency driven strategy would rather have you heads down to cut costs?

What if your product is not as tangible as milk?  And what if your workers are dispersed virtually or even globally?  How would your version of cheese ever make be discovered?

Look at the market for cheese!  What an opportunity to be missing out on should it not exist.  Truth be told, you can’t afford to be missing your cheese.

I recently attended the 2013 Spigit Innovation Summit in Dana Point California.  Here I learned that companies are leveraging digital capabilities and social media concepts to enable collaborative ideation by employees.

Spigit offers a gamified platform that practically automates crowd sourced innovation.   SynecticsWorld will come in and facilitate collaborative work shops with employees and customers to surface unmet needs and the innovations to meet them.  Stanford University offers a free on line process that facilitates design thinking with large groups of people.

This movement is a game changer reinforcing the new paradigm that customer is king.  It also makes for a better work environment for employees.  What does it say about your company if you genuinely believe the best ideas come directly from  your employees?  What if something you helped ideate became that next big success for your company?  How would you feel?

Welcome to the world of the social ideation.

In other words Steve Jobs has been replaced by collective voice of the mail room.

You have to wonder if this is the natural state of innovation anyway.  Lets go back to cheese for a moment.  Why do we not have a name associated with the invention of cheese?  For something so popular you’d think that we would know them like we know the names of famous painters or world leaders. 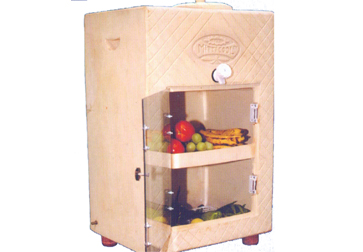 In India there is a cultural phenomenon called Jugaad.   It means that everyone looks at things with an intent to repurpose them as part of daily living.   India’s economy is riddled with low cost, sustainable and highly profitable innovations.  One such innovation is the Mitti Cool Refrigerator.  The Mitti cool, referenced in the book Jugaad Innovation, co-authored by Navi Radjou, was invented by Manshuk Lal Raghavjibhai Prajapati, a man who did not graduate from high school but rather loved working with clay.  His electricity free refrigerator leverages design and water evaporation to work as effectively as a modern refrigerator and it is now sold on the global market.  Considering that a huge portion of the global population does not have electricity one can see why this product is so popular.

What would the top down version of an electricity free refrigerator look like and how much time and money would it have taken to develop?  Would the top have even thought to come up with this concept?

I can imagine Prajapati finding the right design and then sharing it with neighboring villagers who then shared it throughout the broader community.  Something tells me cheese may have taken off the same way.

What do we do with the folks who still believe big ideas need to come from the top?  How do we help them move into this new state of collective crowd driven innovation?

I do have one suggestion.  Give them a copy of a little book called Who Moved My Cheese.