Things Women Need to Be Successful in the Workplace 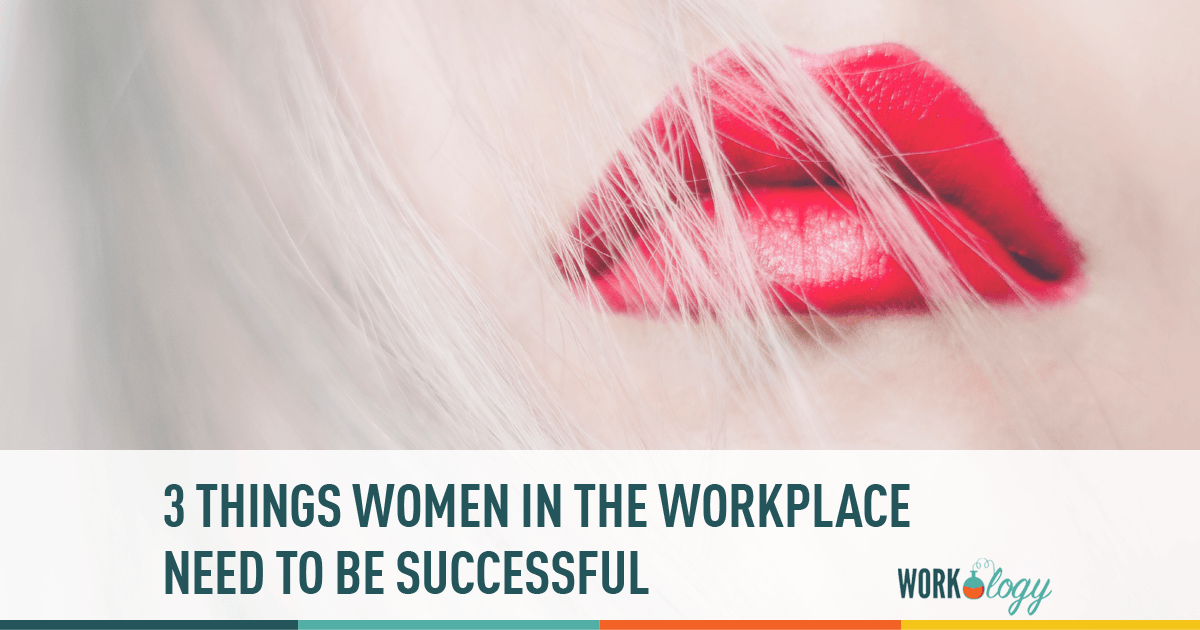 Being a woman in the workplace isn’t easy. There are a lot of uncertainties, pitfalls and other challenges to navigate. Recently, I was asked to speak about how women can be successful in the workplace. A growing number of organizations are committed not to just hiring women but their development in various workplace leadership roles, regardless of their federal contractor status. Companies and leadership organizations are investing in providing resources, support and a safe place for female leadership conversations.

It’s a conversation I’m proud to be a part of.

In 2008, when I had my daughter, I was working as an HR Director. Upon returning from my maternity leave, I was told by my male boss that women who have just had children could never be successful in their jobs. He suggested and even encouraged me to quit my job to take care of my daughter who he referred to jokingly as my little bambino. What my boss didn’t know was that my husband had been laid off from his corporate IT job two weeks before my daughter was born. I became the breadwinner in our family while also navigating the responsibilities and challenges that came with being a first-time parent. I didn’t tell my boss or anyone at my office this. It wasn’t his or anyone else’s business. I did tell him that I was committed to my work regardless of the fact that I had just had a child. In hindsight, I wish I had reported and documented the incident with the SVP. This seemingly small incident had a big impact on me, and I’m not alone. 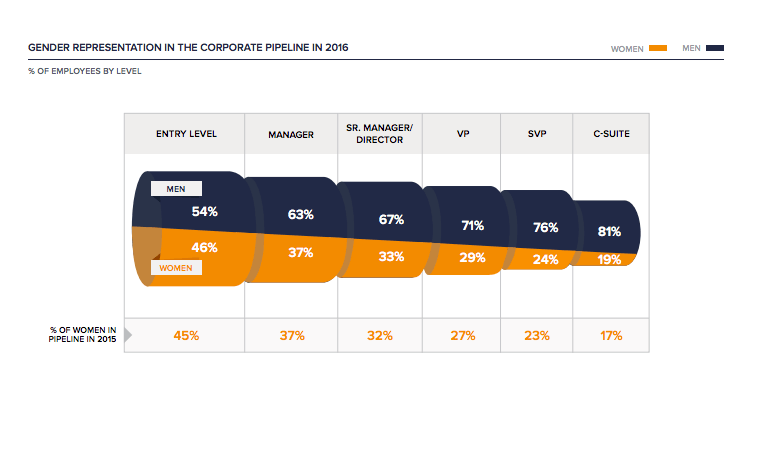 The reality is that women are grossly under-represented the more senior level the role, but women are also under-represented across the entire organization from entry level to the executive team, according to the 2016 Women Workplace Report from McKinsey & Company in collaboration with Lean In. It’s hard enough being a woman without the backhanded comments, discrimination, passive aggressive drama and politics we all experience. According to the chart you see directly above, promotion rates for women lag behind those of men, and the disparity is largest at the first step up to manager. For every 100 women promoted, 130 men are promoted. Current external hiring programs are not improving the representation of women. At every level, companies hire fewer women from the outside than men, and this is especially pronounced in senior management.

What Women Need to Be Successful in the Workplace

Stories like the one I shared above are unfortunately commonplace. We are often fighting an uphill battle in the workplace because we are female. We are held to a different standard and are asked to laugh it off when we question why a disparity exists – even though research, reports, and data support our truths. I have worked incredibly hard to not be different than my male colleagues but truth is that I am, and it’s time we used this to our advantage and demanded that our workplaces, bosses, and colleagues do the same.

Elephants are very sensitive creatures. They are some of the only animals that express mourning of lost family members and have been seen weeping when a new baby elephant among their family is born. Elephants may be sensitive souls but they have incredibly thick skin. Nothing can penetrate it, not even a snide or passive-aggressive comment from a co-worker or colleague. I’m not suggesting that we should just “get over” comments like I mentioned above. But I do think we need to be prepared for them and understand that others male or female we try to play on weaknesses to try and gain an upper hand. This doesn’t mean that you shouldn’t report discrimination and harassment that you experience, however, you should be prepared to let comments roll off your back and not impact you like my boss’s did. While I didn’t let him see me cry frustrated and angry tears, they happened just in the comfort of my office later with the door and blinds closed. His comment led me to seriously question if I could be a parent and be a leader.

Pachyderma is where I think that Sheryl Sandberg’s Lean In missed the mark. Her advice was just to get over it, do the work, act like a man and do whatever you need to do to succeed. I don’t think we need to act like men at all. We are sensitive beings who can use these feelings, intuitions, and experiences to our advantage. We just need to understand ourselves as well as the playing field we are dealing with, to anticipate obstacles, conflict, and confrontations so that we are equipped to act accordingly.

What I needed from my boss in that moment was a supportive comment and an introduction to a female mentor who had juggled being a parent as well as a business leader. I wish I could go back and tell Tom what I really thought in that moment. We need sponsorship from allies and leaders, male as well as female within our industries or offices. We need sponsors and mentors that are focused on lifting each other up instead of pulling others down. I think of crabs in a boiling pot. When one crab in the pot nearly reaches the top, the other crabs don’t lift it up to freedom and safety, they pull it down. I do not believe it is a dog eat dog or a crab eat crab world. As a sponsor or mentor, you build a community and network where together you are stronger helping others in their professional journeys. It doesn’t have to be me. vs. them – we can build a community that is about growth, networking, development and learning. This is one of the reasons I built the Workology community, which is focused on empowering others through conversations, stories and resources. I created what I wished my boss or someone in my organization had done for me.

Mentorship is no different. It doesn’t need to be formal, standardized or organized – the key is simply that in order for mentorship to truly work, both parties must be open to accepting the opportunity. Mentorship has been a game changer for me, and I credit my mentors for much of my professional success. What’s interesting is if you asked them, they would tell you I helped them too in different ways.

As women we need the support of a partner, friend or family to help talk us down from a ledge or to be a supportive ear. Finding your tribe and establishing friendships is challenging, but the older and more experienced I’ve gotten the more I realize how important support is in my career. I’ve found that as I’ve climbed the professional ranks, it’s harder to make friends and to keep them. Often people view you as a threat or think you are too busy or successful, which is completely untrue. We all need companionship. A good support system is not just built on friendships but those sponsorships and mentorships relationships you’ve built along the way.

Aside from having a support circle or community you can lean on in good times and bad, making time for yourself is critical in being successful. We need downtime to recharge, reflect and be our best selves. That means taking care of yourself and investing in you. Maybe that’s a commitment to a monthly happy hour with friends, pedicures or making time to read a book. Whatever it is, do it, because we are often the harshest critics of ourselves.

How to Make a Difference Promoting Women Leaders

These three elements are the foundation of thriving as a woman in the workplace. We need more lunch and learns, women’s empowerment meetups and training and mentorship programs that are focused on women. The only workplace leaders who can truly understand the challenges, struggles and obstacles are other women leaders. In order to move the needle, women leaders need to aspire to the mantra of no woman left behind, and we need to start lifting each other up and supporting one another today.