What It Takes to Be a Thought Leader 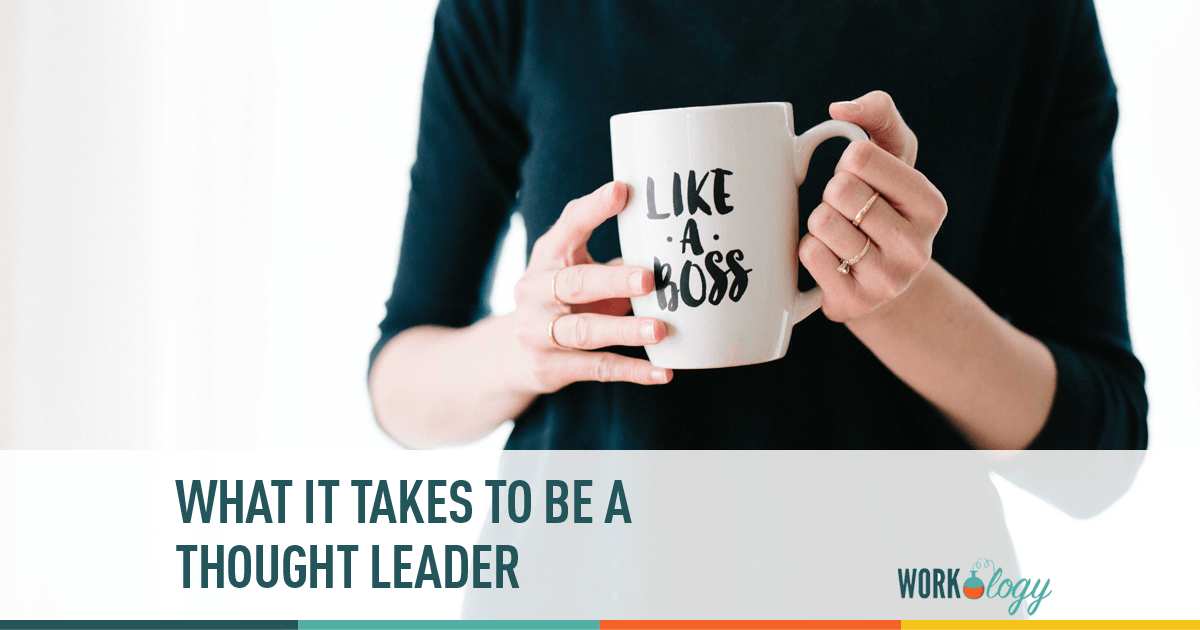 What is Thought Leadership?

There’s a certain amount of responsibility, finesse and planning that comes into being a thought leader and someone seen as valuable in thought leadership. In all honesty I didn’t plan or intend to be one, but then again I’ve never ended up where I planned to go. In 2001, I graduated college and took a job with Target as part of their assistant manager training program. Someone in the Kansas City regional office decided for me that instead of the executive team leader of softlines that I needed to work in HR. I never asked to work in HR. I never asked to be a thought leader. It’s an opportunity that presented itself and I worked a great deal towards doing so once I realized it was something I wanted to be. Thought leadership is when an individual has visibility, influence and respect from a group of individuals. They look to them for insights, trends and resources. In my case, I happen to be a thought leader in the human capital and HR communities.

What is Human Resources?

In 2007, I was disenchanted with HR which is short for human resources. I was good at my job, and could be passionate about the work but extremely frustrated that average practitioners weren’t being recognized. I had no voice in decisions that were happening at work. I spent hours making schedule changes at the Home Depot stores I worked at cross clocking employees into departments every Sunday so I could achieve an arbitrary 97% scheduling goal. My boss looked good and I received accolades on conference calls a plenty, but the stores were any more staffed than they were before. Every Sunday I spent 4 hours reallocating the payroll hours to the departments based on sales in real time. My managers were happy so I should be too, but no real meaningful change was made outside of avoiding being publicly shamed on the weekly HR conference call. We were told to wait and keep our heads down. Just keep cross clocking those employees into the right cost centers. I did  the work and was rewarded with a new store that required me to work 18 hour days. The store was in a middle of a massive class action lawsuit and I was the HR representative who oversaw the discovery research and meetings. I hated it and after 4 months I went on FMLA. I had worked myself right into a depressed state that was only enhanced by my ex-husband who was stalking me as I moved from store to store. So I checked myself into a 12 week all expense paid vacay.

This work life career progression strategy wasn’t working for me. I figured that out during my time off. I took a job at a regional grocery chain in order to be mentored by someone that could provide me a sense of direction and new experiences. It didn’t happen. He micromanaged, treated me like a child, and I quickly realized that this was the future of my professional life in HR. I didn’t want to be an unhappy robot going through the motions at work. It didn’t matter what new job I took. The outcome of meaningless robot activities to achieve ridiculous goals was the same. I wanted to build things, leverage technology and approach the world in a new way. I was tired of being told I was too young while also being too experienced. Maybe it was because I was a woman. Maybe it was because I worked in HR. Maybe it was just because.

I left that job too, and  I realized a mentor wasn’t the sole solution for my career progression. It depended on me. I took a job where the person I would be reporting to was the same person who was hired for the HR Director job for which I originally applied. I took the job anyway. I was skeptical and excited at the opportunity but also realistic in that I would have to seize my own professional experiences and opportunities. I approached 30 and started my blog as a way to share my experiences, provide resources and create my own opportunities for change.

Rebecca turned out to be a wonderful boss. She took risks and approached situations differently. I never once felt like my ideas were crazy. I was allowed and most importantly was supported in being the creative me. Our crazy ideas just worked and I grew more brazen in my conversations on my blog and in my approach. The results of our efforts supported my unconventional ideas and POV.

In all honestly, it’s really not that hard to be creative in HR or to ruffle up feathers. We’re a community of rule followers and of get it doners focused on things like audit forms, compliance and checkbox for annual reviews. Creativity isn’t rocket science. It’s just something that isn’t always supported or foster working in HR. In 2007, creativity was as simple as an online exit interview. Some corporate HR audit team member visited our site and was blown away by a 15 question survey monkey.

Thought leaders are created by the individual but arise out of a need of not one but many. In 2007 and 2008, social media and blogging allowed me to connect with other like minded individuals and learn from them. We shared our ideas, thoughts and feelings. It was a time of uncertainty because of the recession and the innovation in technology particularly the iPhone and social media driving increased transparency. I was a part of something bigger than me. We all were. And it was that transparency and candid conversations combined with an unconventional point of view that I was able to provide. I took chances when others would not. I left my corporate job. Working for myself afforded me the opportunity to make many, many mistakes which thankfully I learned from and created the person and platforms you see today.

Thought leaders are most effective when they stay engaged to the audience and industry they serve. They become the voice for a community and ruthlessly support and provide resources and information to the individuals that they serve. Thought leaders fail a alot, but most importantly they listen, research and ask questions long before they share their insights in an analyst report, webinar, panel session or blog post.

The HR industry is one that is extremely niche, specific and complex. For those reasons it is the perfect environment for me. The barrier to entry is rough. It’s well-insulated many try but most cycle back.  Thought leadership requires an increasingly large amount of information absorption, knowledge and experience you can’t buy, fake or pretend. The knowledge happens through a combination of painstaking research, work experiences and an obsession for knowledge along with the guts to share your point of view even if it’s wrong and understand your point of view and perspective is constantly up for debate.

Thought leadership requires really thick skin. Not everyone will like you. I repeat, not everyone will like you. They will publicly shame you, talk crap on you and you have to remind yourself that these type of negativity means that you are on the right path to driving change. So you keep on having those conversations, refining and sharing your point of view. You rise above and realize that because you have done the work that the negative person is probably threatened by something they do or don’t see in themselves. Their insecurity has nothing to do with you entirely.

What it takes to be a thought leader in HR is first and foremost an understanding of the industry and a willingness to study is much like a Jane Goodall studied the ape. You have to get out in the wild of HR and recruitment. Watch it action, be a part of that action and anticipate the activity and change. Keep detailed notes. Ask many questions and move forward with the change. Thought leaders talk and think a lot. They throw stuff, meaning ideas out there, chew on it and see if the idea, platform or process to drive change, process or innovation has legs.

Most importantly, a good thought leader stays humble. They work tirelessly and often obsessively towards their ultimate goal whatever it may be. My goal has always been to help elevate the profession and spotlight the practitioner. Most importantly I was in search of a mentor now realizing that the best way to fine mentorship is now through an individual but the collective power of many.