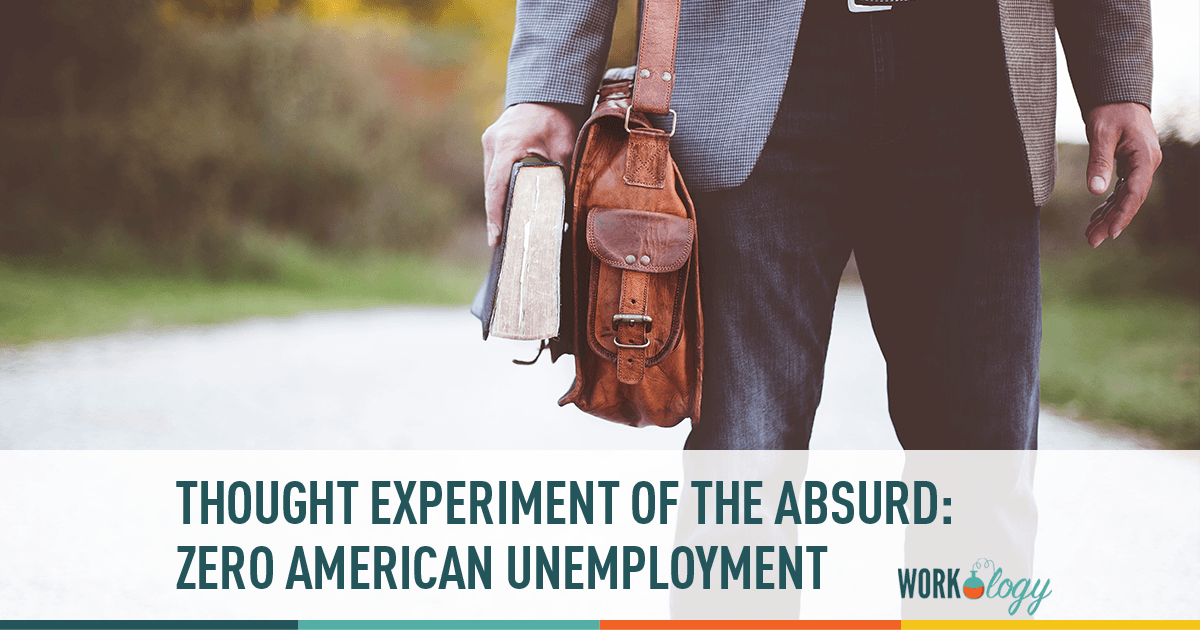 Continuing the trend, Zero Hedge notes unemployment is headed to ZERO and will go negative in less than a decade because so many people will have entirely dropped out of the labor force.

And note, if Allan’s trend analysis continues unchecked, the stock market will be making new highs in its wild ride higher. See Trends crush reason and other follies.

Thought Experiment of the Absurd: Zero American Unemployment Before the Next Presidential Election

Back in May, we decided to conduct a thought experiment of the absurd as these are usually the best demonstration of modern-day economic insanity, when we extrapolated, based on trailing 12 month average data in the key labor market indicators, namely the number of total employees, the number of unemployed, the size of the labor force, and most importantly, the number of people not in the labor force, just when the US unemployment rate would hit not only zero, but go negative. As a reminder, we found then “that at the current surge of those leaving the labor force, the US unemployment rate will hit 0.0% in December of 2021 and finally go negative, or -0.1% in January 2022.” Today, in the aftermath of Friday’s farcical jobs data, we decided to update his absurdist thought experiment, because sadly what we thought was absurdity four months ago has proven to be reality.

Sadly, it is this statistical ploy on the number of departures from the labor force that continues to paint the US economy in a favorable light. So let’s see just how “favorable” that statically absurd future is? Rerunning the numbers in our model, based again on trailing 12 month data, “A(bsurd)-Day” is now even closer – instead of hitting 0.0% unemployment in December 2021, the US will have zero unemployment in September 2021, and its first negative unemployment print in October of 2021. The one trade off: on this date the labor force participation rate will drop to 53.6%, from the current 63.5%, as barely half of those eligible for work in the US will have a job.

This is how the American absurd labor forecast based on BLS-reported August trends looks like 10 years into the future.

But what if one extrapolates merely last month’s trends into the future, instead of averaging out the LTM data? Then things get really fun.

Below is the American absurd labor forecast on thought experiment steroids:

As the chart above shows, should the number of people not in the labor force continue to surge at the August rate of 581,000/month, America will be “unemployment free” in October 2016,before the end of the next president’s term, which judging by the most recent opinion polls looks set to be again Barack Obama. The fine print: the labor force participation rate in November 2016 will be a record low 48.1%, and which, if extrapolated further into the future, would see less than a third of eligible US workers have a job by May 2022, as two thirds of the US population live on perpetual government handouts.

And that is the absurdity of America’s labor force statistics in a nutshell.