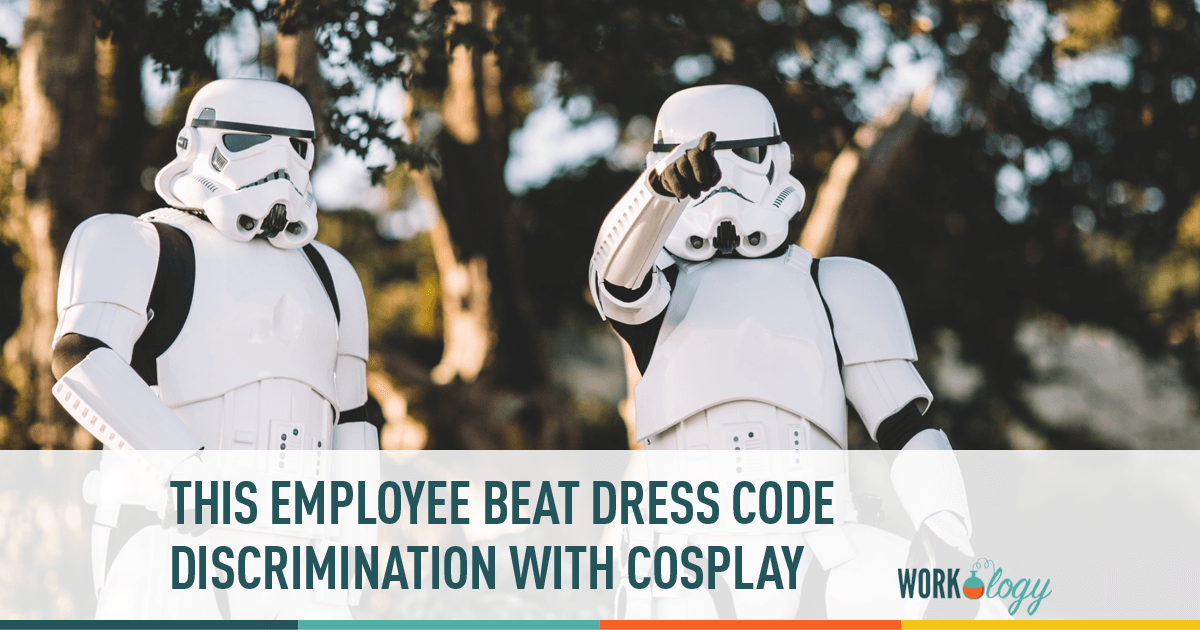 After being told that her ponytail and headscarf did not meet dress code requirements, June J. Rivas gave up on regular professional attire and instead wore costumes of her favourite film, comic and game characters to work. Rivas posted 20 cosplay selfies on Facebook and explained that she came “to work each day in an outfit that fits the guidelines she laid out…just…not QUITE the way she expected.”

Does cosplay belong in the office? That, I think, depends on the office. But can cosplay fit into your workplace’s dress code requirements? Absolutely. It all depends on how it’s written.

The dess code at Rivas’ workplace initially stipulated only that employee attire needed to be “clean and pressed.” Such a vague rule allows for employees and employers to interpret it as they will — employees might argue that jeans and a t-shirt are fine, so long as they’re “clean and pressed;” employers might argue that all headscarves, including “cultural head wraps” aren’t appropriate, no matter now “clean and pressed” they are. And Rivas’ employer did just that — the initiating incident of this hilarious workplace protest was her supervisor determining that her head scarf was unprofessional. When Rivas filed a harassment complaint, her boss refined that vague dress code,”banning straps, hats, sandals, cleavage, back out, lace, and even ‘cultural head wraps’.”

Banning head scarves and wraps is undeniably a form of employment discrimination and Rivas did report her supervisor to the Equal Employment Opportunity Commission (EEOC), but the wheels of bureaucratic justice turn slowly. So in the meantime, Rivas decided to show how ridiculous the dress code policy and its enforcement had become — by dressing up in costumes that consistently passed the dress code test. 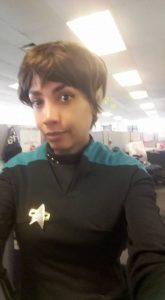 Rivas’ silent protest is not the kind of outcome most employers want, but it was a clever way to show up how biased and absurd dress codes and their enforcement can easily become. Unequal dress code policy enforcement is one of the less subtle ways that employment discrimination manifests, but it can be difficult to fight without very clear documentation and supporting evidence. In the hospitality and restaurant industries, discriminatory and unfair dress codes have forced women into unsafe footwear and sexualized attire. In the corporate environment, many black women have been penalized for their natural hair. And time after time, employers have tried to penalize Muslim women for wearing the hijab or to ban them entirely from the workplace.

But while it’s true that “an employer may require all workers to follow a uniform dress code even if the dress code conflicts with some workers’ ethnic beliefs or practices,” employers are also required to make reasonable accommodations. That is, if a head scarf or hijab does not interfere with an employee’s work and is professional in appearance, an employer should allow it. The same goes for diverse hair styles and apparel — so long as they’re professional. It seems simple but what employers determine to be “professional” is in part determined by unconscious biases. For example, black hair is often discriminated against with the excuse that it’s not “neat and tidy;” i.e. that it does not look like white hair.

Stephanie Hammerwold emphasizes that discussions about dress code violations should be respectful and without condescension. “Review the policy, address how the dress code violation affects business and offer some examples of appropriate dress.” Her approach, focusing on “how [it] affects the business,” has the potential to reveal unconscious bias in your approach to dress codes. Does the hairstyle or apparel in question pose a safety risk? Could it offend other workers? Could it create the wrong impression with your clients? Or is there some other reason that it bothers you and appears less than professional to your eyes?

If your dress code and enforcement policies allow employees to dress up as Star Trek characters but not to wear a simple head scarf or style their naturally, you’ve got a problem — one that may land you in court.