There’s No Room for Mistakes In Layoff Season 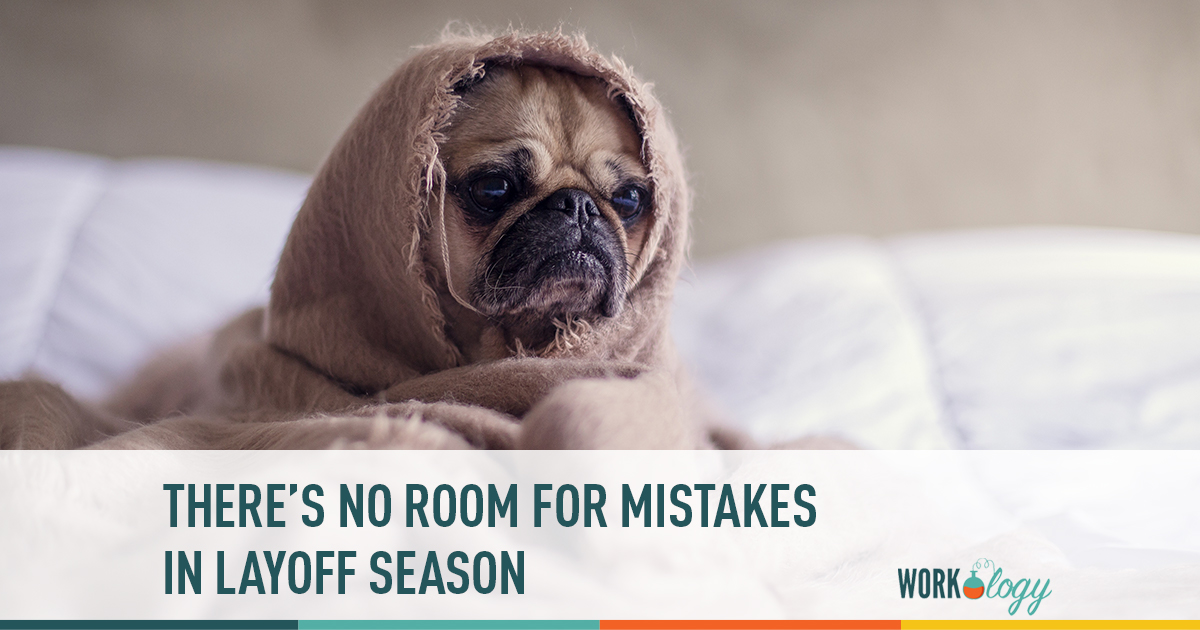 Yesterday we learned that Walmart will cut hundreds of jobs this month, including dozens in human resources and other corporate departments. We also learned some of the details of Boeing’s planned reduction in its engineering force — first an invitation to voluntary separation this Friday, January 13, and then notices of involuntary separation next Friday, January 20. Last week several retailers announced that they were going beyond letting go seasonal staff to cut permanent staff and even close stores. The Limited, after several rounds of layoffs, closed all of its remaining 250 stores on Sunday, January 8.

There’s No Room for Mistakes In Layoff Season

Those who work in human resources or management know that every year, from December to January, millions of workers lose their jobs. That’s not due to deliberate cruelty but simple business needs, as organizations make adjustments in their workforce for the new year. Millions of Americans are being hired too, during the same period. That winter layoffs are a fact of business life doesn’t mean that companies can be cavalier about it — rather, they should be even more diligent about making and following a layoff and termination plan that ensures everyone involved is treated with dignity.

I don’t have a lot of sympathy for managers dealing with “accidental” layoffs. While it undoubtedly sucks for those who have to repair the brand and reassure employees that their jobs are safe, it’s much worse for workers who have to cope with interrupted benefits or just the terrible stress of thinking they’ve been terminated, only to find out they haven’t. Terminations are among the most stressful events we deal with in adult life, along with the death of loved ones, divorce and illness, and some dismissed workers can even pose a risk to themselves or others. But accidental terminations (and accidental benefit interruptions) are all too common. What’s frustrating about them is that they can be prevented if business leaders are diligent and if critical software is doing its job properly.

The latest case of accidental, sort of termination comes from newspaper publisher Gannett. After returning from the holiday break, a number of journalists found a request in their inbox that they fill out their exit survey. While Gannett’s system didn’t terminate those employees, it generated an email implying that it had:

Sorry, Gannett journalists, that your year had to start this way. pic.twitter.com/oFGPbXmgZg

All accidental terminations are awful, but this is the worst time of year for these mistakes to happen, because so many workers are already watching their leaders closely for signs of impending layoffs. Of course, it’s not just your employees who are watching you carefully, recruiters and managers at your competitors are prepared to scoop up top candidates in the case of actual or accidental termination. Not only do such mistakes cause undue stress for employees (and you), they’re a great opportunity for competitors who can tout their now superior employer brand — they wouldn’t be so careless as to accidentally fire you right after Christmas, oh no.

50% of American workers want to quit their jobs in 2017, or would be willing to leave if something better came up. In an increasingly candidate-driven job market, even a quickly corrected mistake during layoff season is not one that you can afford.