The US Turtleconomy Is Basically Ok 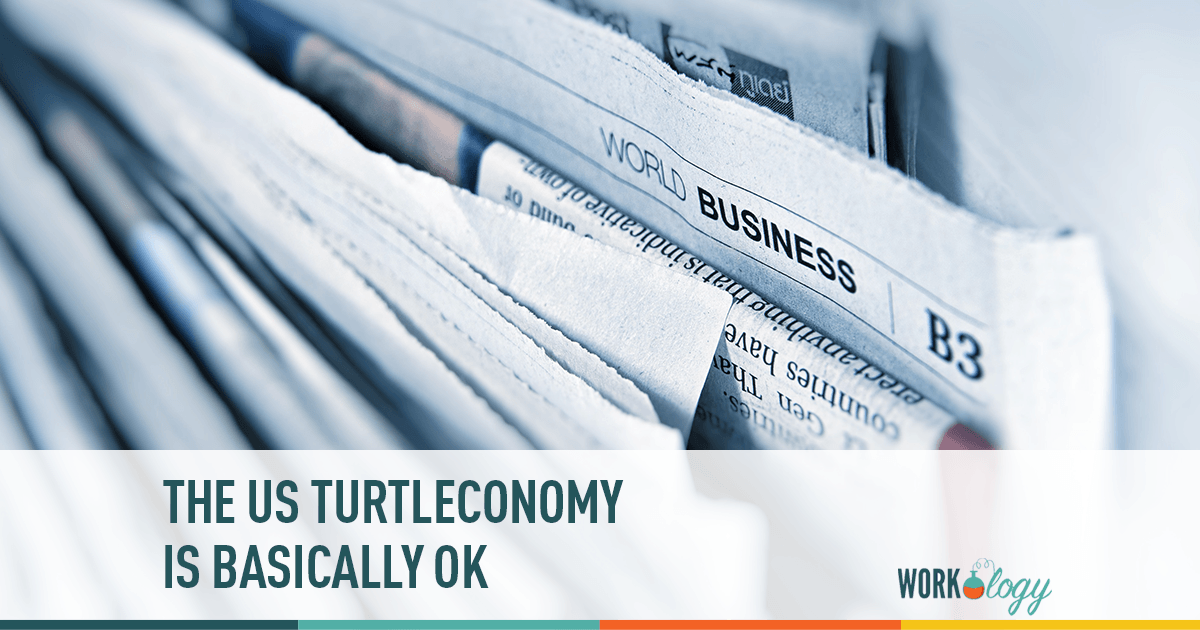 The US economy continues its turtle-like, slow and steady growth, even as overseas markets experience turmoil. The latest BLS jobs report is out and it’s the same story it’s been for months now: unemployment rose ever so slightly to 5%, with service keeping healthy and oil and gas still troubled; wages ticked up again, another minuscule increase, this time of 0.3%; hours worked showed no change, at an average of 34.4 per week; labour participation rose to 63%, the highest it’s been in years; and finally, the big one, non-farm payroll increased by 215,000 jobs, sticking to that sweet average of 200,000 or so per month.

Don’t Panic About the Market

The smart forecasts are all bearing out and small revisions – all to the good – have been made to previous months’ reports. So. Don’t believe the hype or the panic. The US job market continues to be healthy overall, even as we experience dramatic shifts within smaller markets. Service, healthcare and construction continue to grow. Energy continues to shrink. Few of the big key metrics are shifting much at all, and that’s good and bad news: the people who were doing well late last year are still doing well now, and the people who were struggling last year are still struggling now.

The Fed, of course, is concerned with China’s ongoing market troubles and the stock market’s anything-but-sober approach to any and all news, but Chairwoman Janet Yellen hasn’t made any noises about another rate increase.

For the last few months it’s been harder and harder to write about this topic without resorting to GIFs – and as the gap between the facts and the business news fables has shrunk, it’s been worse. With even avid market-watchers chilling out, there’s little to say about the overall picture (“I mean, I guess it’s fine?”), which gives little fodder for panic or celebration. But because overall growth has been so steady, save for expected seasonal bumps, it gives us the opportunity to look a little closer at those specific markets that are doing exceptionally well or exceptionally poorly.

Do Panic About the Robot Apocalypse

So though we know, as has been the case for months, that retail and other service sector jobs are booming and energy jobs are disappearing, this is a good time to look deeper into the why of it, and to ask if an even more service-dependent economy is what we want.

It also continues to be the case that although unemployment is low, many American workers are trapped in part time and low wage jobs which offer them little hope for future advancement. Like I said above: the people who were already doing well continue to do well, and the people who are struggling continue to struggle. That’s good news for engineers negotiating bigger bonuses and more and more exciting projects, but bad news for everyone stuck in dead end jobs that will eventually disappear altogether, as the American economy continues to automate and eliminate service jobs.

Growth in service and construction are the big wins in this job report and they have been for months. But those sectors are dependent on something we know is going to change, and soon – although the service economy is growing now, we know that countervailing trend, towards automation, is the good bet in long run, and it has been for decades. That is, we know that many of the jobs we see added month to month, will eventually disappear altogether.

The American economy is neither booming nor busting but that’s not a state that can continue indefinitely. There will be a shakeup, either to the good or the bad, but we can use this time of relative turtlish calm to plan, prepare and think about what kinds of social and economic policy we might need going forward.