The Truth About Working For Google or Other Startup Giants 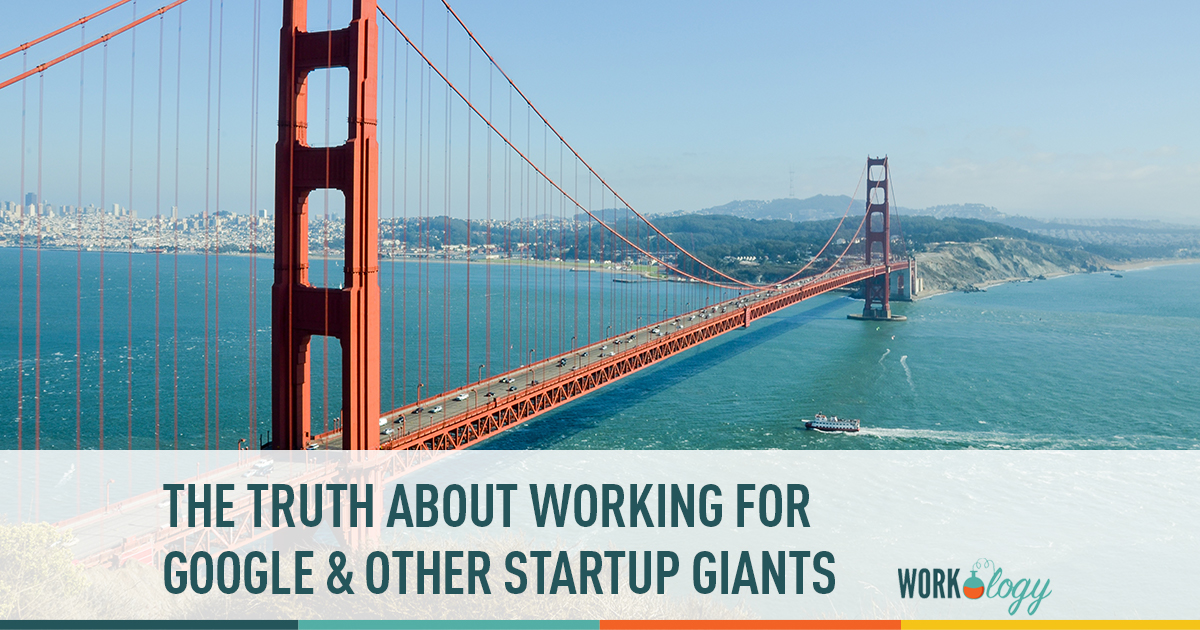 What do all of these startup giants have in common? Well, everyone wants to work for one, of course. Or, have at least fantasised about it.

These days you can be the CEO of Ford and not many will blink an eyelid.

But drop casually at a party that you work for LinkedIn or Uber (even if it’s an entry-level role) and get ready to be the most fascinating person at the said party.

There’s a palpable sense of romance, prestige and enigma that enshrouds the world of startups and, specifically, the idea of working for one of Silicon Valley-based unicorns.

There’s even an HBO TV comedy series named after it—that’s how hip it is.

By now, you’re probably wondering if diving into this scene would be everything it’s cracked up to be. Or is it mostly just hot air?

On the off chance you’re thinking that living and working in the San Francisco Bay Area for a few years would be a good career move, I’m taking a closer look at the pros and cons.

All I ask is that you hold off on buying your Tesla (and signing up for that $10,000/week one-bedroom apartment in Telegraph Hill) until you read this article.

First, a few basics about you:

What Do You Do For a Living?

If you’re a coder, great! A Stanford University graduate, by chance? Ah, too bad.

But all isn’t lost. Just know that some of the big unicorn startups give top priority to Stanford grads.

If you’re in sales, marketing, customer service, product management or recruiting, you might be in luck. One caveat is that salaries trend lower than big corporation salaries. And negotiating equity can be tricky, depending on where the startup is in its lifecycle.

Quora is a great place to read real conversations on this topic.

How Many Years of Experience Do You Have?

What I really want to ask here is, well, um…how old are you? The average age of a worker in American is 42. In Australia and the UK, it’s 40.

But the average age at all the companies named above hovers around 28-29.

Something to consider when you think about who your colleagues will be, and how much you’ll be able to relate.

And, the Valley is known for rampant ageism.

When Zuckerberg was a tender 22, speaking at Stanford (naturally), he said “I want to stress the importance of being young and technical. Young people are just smarter. Why are most chess masters under 30?”

What’s Your Tolerance for Risk?

No surprise, the market ebbs and flows. As of this writing, there’s a bit of ebbing happening.

Recently, Dropbox announced that it was doing away with certain employee perks to save money, such as meals, dry cleaning and shuttles.

They estimated the cost savings at about $25k per head.

Then there’s Twitter, which is a bit puzzling at the moment: Relevant because it’s emerged as Trump’s favourite way to communicate with the American people. But revenue is suffering, and not too long ago they made redundant about 350 people, or 9% of their workforce.

Point being, you have to be ready for anything.

Now On to SF and the Valley

It used to be that most startups were down in the Valley. But that’s changed.

Between 2012 and 2013, 24 companies relocated to SF – including Amazon, Microsoft, Yahoo, Google, Mozilla, eBay, and LinkedIn.

Now, bear in mind that San Francisco is a petite 5-kilometre by 5-kilometre peninsula. It’s tiny. One of its nicknames is “Little City”.

Bring On the Cons:

In 2015, SF became the most expensive city in America.

As of this year, a mere 11% of the city’s population is able to afford home ownership while 85% of the city’s new real estate developments are targeting the high-income market.

To the point where Google is talking about building housing near Mountain View and incentivising their employees to live there—10K bonus to live in a startup dorm, anyone?

And, according to sfgate.com, homelessness is at an all-time high.

Oakland used to be a viable option for less-expensive housing, but now Oakland’s pace of rental increases is only surpassed in the U.S. by San Francisco.

While we’re on Oakland, no doubt you heard about the 36 artists who lived (and died) in the Ghost Ship Warehouse fire last year. It was never wired for residential use, but these artists couldn’t afford other housing in the Bay Area.

Case in point that it’s getting tougher to live in SF and not be a technocrat anymore. Conflicts between the tech elites and natives/long-term residents are alive and well.

1. The Black Tech Buses that shuttle these workers back and forth to the Valley, or from the Valley up to the city, use Municipal transit stops.

Until fall of 2016, their use of the stops was not permitted. And residents protested across the city claiming these stops were raising the rents in their neighbourhoods.

2. Anti-AirBNB Posters can be found plastered to telephone poles and corner store windows throughout many SF hoods.

Sure, Airbnb was founded in SF. But the proliferation of its concept is taking potential housing away from residents whose landlords can make more money through Airbnb than with a long-term tenant.

The social dynamic is complex, to say the least.

Now On to the Pros

Whew. Time for a deep breath.

After all that heavy social stuff, I think we’re ready for a little nature. Luckily, the entire Bay Area is rich with natural beauty and blessed with a mild climate.

Depending on where you live in the city itself, there are great beaches (a couple more urban and a couple that feel like you’re in the Mediterranean). Golden Gate Park and the GGNRA are also really spectacular.

Plus, some of the best Mexican food north of the border and any kind of yummy Asian food you can imagine.

Will You Be Able to Afford Any of This?

The good news is (these are the pros, remember?) your salary will be higher. So it may just barely even out if you watch your budget.

Plus, unlike anywhere else in the world, you could actually meet for coffee with someone who works at a company you’re curious about—Zendesk, Slack, Salesforce, Google, Uber, you name it.

They’re all just a short Lyft ride from each other. Or, if you prefer, a brisk walk in the fog.

And the Blue Bottle coffee is out of this world. It’s backed by the Valley’s elite – of course – including one of my favourite Valley characters – Shark Tank’s outspoken loose cannon Chris Sacca.

Speaking of wild, Trump’s immigration policy is a definite wild card for anyone considering relocating to America. So keep your eye on that one.

And the Last Pro Is…

You don’t even need to move to the Bay Area to join one of these legends.

Most of the companies we’ve referenced have international branches, offices and remote teams. Or, you could explore a more reasonably-priced city in another part of the U.S. such as Seattle, Austin or even Charlotte.

And while none of the big names offer this, some startups don’t even have offices.

TopTal – an American company that provides freelance software engineers and software designers to other companies – insists that you work remotely. Even it’s from a beach, mountaintop or a tropical island.

As long as there’s Internet.

So, clearly only a crazy person would pay Bay Area rents if they didn’t have to. Unless, of course, you’re one of the crazies from way back—an adventurer who wants to experience firsthand the reality of this unique point in time in the global hub of innovation.

Unless you’re one of the ones Steve Jobs talked about in that first Apple ad from the Think Different campaign:

Here’s to the crazy ones, the misfits, the rebels. The troublemakers. The problem child. The round pegs in the square holes. The ones who see things differently….

“They’re not fond of rules and they have no respect for the status quo. You can quote them, disagree with them, glorify or vilify them. About the only thing you cannot do is ignore them. Because they change things….

“They invent. They imagine. They heal. They explore. They create. They inspire. They push the human race forward. While some may see them as the crazy ones, we see genius. Because people who are crazy enough to think they can change the world, are the ones who do.