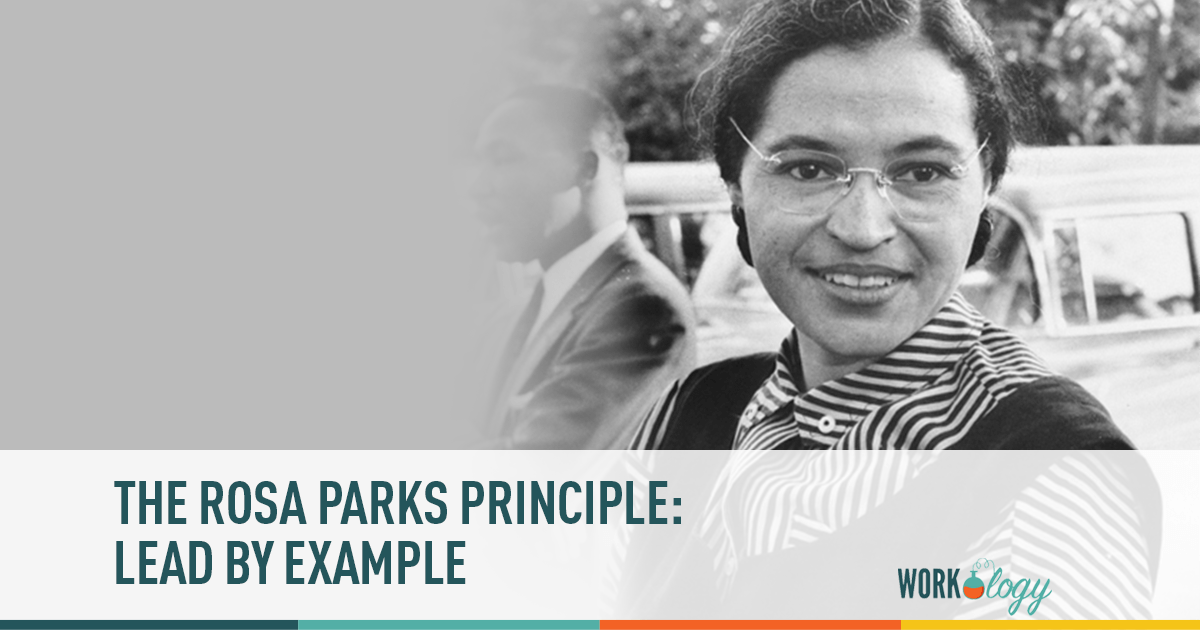 The most important action a leader can take is to set the example.  A successful business cannot sustain itself by standing still.  Today’s leaders regularly find themselves called upon to lead employees through projects that change the way business is done.  Change is scary.  Whether implementing a new technology, improving a process, reorganizing the company or handling a management shakeup, a leader must demonstrate authenticity and courage in modeling the change before employees will follow and adapt to the new way of doing things.

Rosa Parks refused to give up her seat on a bus in 1955.  It was time for the way things had been done in the past to change.  By deciding to passively resist, Rosa Parks led by example.  Her action on the bus that day resulted in a civil rights movement that, ultimately, changed the culture of a nation.   Rosa Parks knew she would have to face the consequences of her resistance.  Her act of defiance was courageous because she overcame her fear of those unknown consequences and chose to act regardless.

The extent and pace of change that leaders and employees face in business today is unprecedented.  Great leaders are needed to inspire employees to overcome their fear of the unknown and adjust to change.  To be believed by employees,  a leader must be authentic.  True leading by example means acting in a way that is true to you and your style.

Rosa Parks’ action was impactful because it was unique to her situation.  A seamstress returning home on the bus after a long day at work doesn’t want to change seats or stand in the aisle of a bus.  Her act of remaining in her seat was true to Rosa Parks’ situation and that is why it resonated so well with others.  People could relate to her situation — no matter the color of their skin.

When leading by example, there is no need to issue orders or tell people what to do; no need to force people to do things they don’t want to do. Instead, inspire by simply doing it the way it should to be done.  Rosa Parks demonstrated, through her example, that no person should have to give up their seat because of race.

Whatever change you wish to  lead, be authentic and courageous in your leadership.  Find your own way through the change first — and then lead the way for others.

But know that you are always “on stage”.  Your team is watching everything you do and how you react.  Remember that approximately 60% of communications are non-verbal.  Whether you recognize it or not, as a leader, you are always on stage.

Albert Schweitzer, philosopher and winner of the Nobel Peace Prize, said, “Example is not the main thing in influencing others, it is the only thing.”

Bio: Noma Bruton is an HR expert in the banking industry and currently serves as Chief Human Resources Officer of Pacific Mercantile Bank in Costa Mesa, CA. She is passionate about improving mental health in the workplace and the prevention of suicide. Noma is the author of the Sagacity | HR blog. Connect with Noma.