Reports on the Death of HR Are Greatly Exaggerated 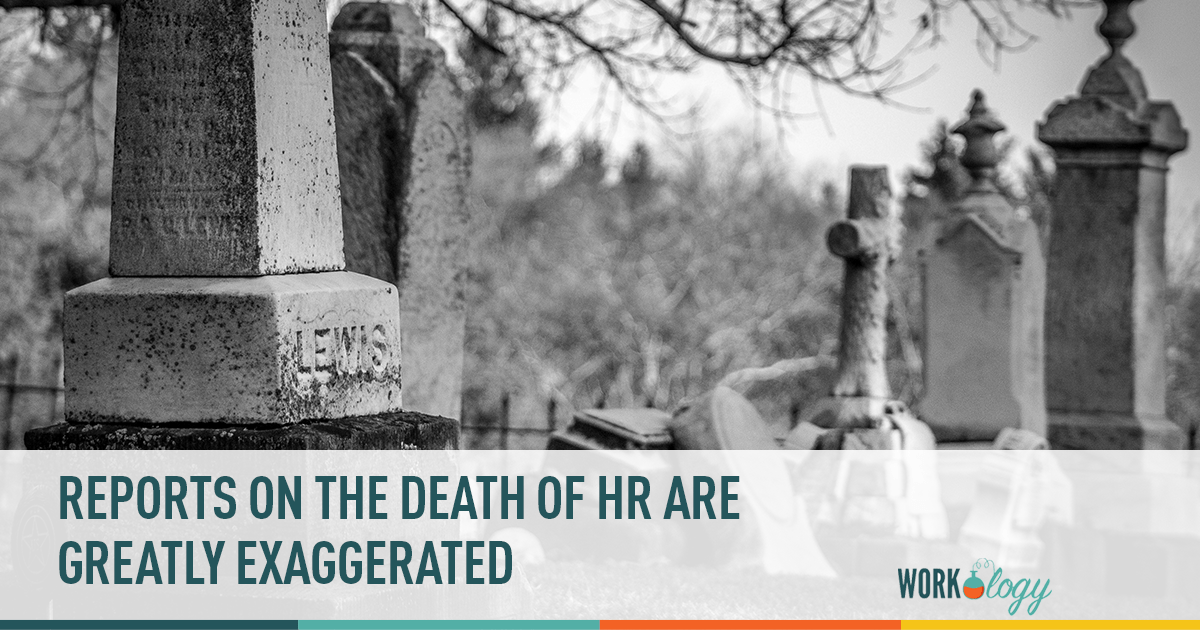 “The reports of my death have been greatly exaggerated.” – Mark Twain

Several reports and articles I have read recently have reported on the demise of Human Resources. To paraphrase Twain’s quote, I think the death of HR has been exaggerated. The most recent was Jacob Morgan’s article and video, presented in Forbes.

Morgan said that on a recent speaking tour one of the most frequent questions he was asked was “What is going to happen to HR?” He stated that HR is a title that is disappearing. It is being replaced by other titles, such as Department of People, or People Experience or one I enjoy Department of People Success. Many of the people, such as Morgan, for whom I have a great deal of respect, have not been around long enough to know we’ve been through this before.

In the early 1980s we did not have Human Resources departments, we had Personnel Departments who were in charge of “personnel administration.” They dealt with paperwork, compliance, getting people hired and getting people fired. They made sure people were signed up for benefits and that everyone got a paycheck. Then there was a backlash about the impersonal nature of “personnel.” The term was too dry, too impersonal. After all employees were not “personnel” they were “humans” and valuable resources to the company. So we became the “human resources” department in recognition of the value of our “human assets.”

Today the term “human resources” appears wearied and worn. After all employees are people and not “resources.” Additionally, the world of work is changing. The nature of this changing work calls for a different kind of person working for us — so the argument goes. We want people to experience engagement and feel fulfilled. They want work satisfaction and may not want a job, at least not a “permanent” one. The argument goes that HR departments should disappear and we should concentrate solely on matching the right people to the right job.

Call it What You Want

Having been through the name change before, I think you can call it whatever you want, whatever fits with your company’s personality. Department of People Success, Department of People, Department of Worker Satisfaction, heck even the Land of Employee Love would work, but one thing is sure, people still want to get paid, people still want some benefits of working, people will still complain about treatment, and as long as we have a government, we will still have regulations that have to be complied with and followed. If you move that function to managers, someone still has to train them. You can have lawyers do it, albeit that is an expensive solution, and possibly not a long lasting one, since lawyers are one of the jobs most predicted to be lost to automation.

My point is you can change the name but “human resources” in some form will be around until we don’t have the humans anymore; then it will be the Department of Artificial Intelligence.