The Rehire: How To Win Back Good Employees 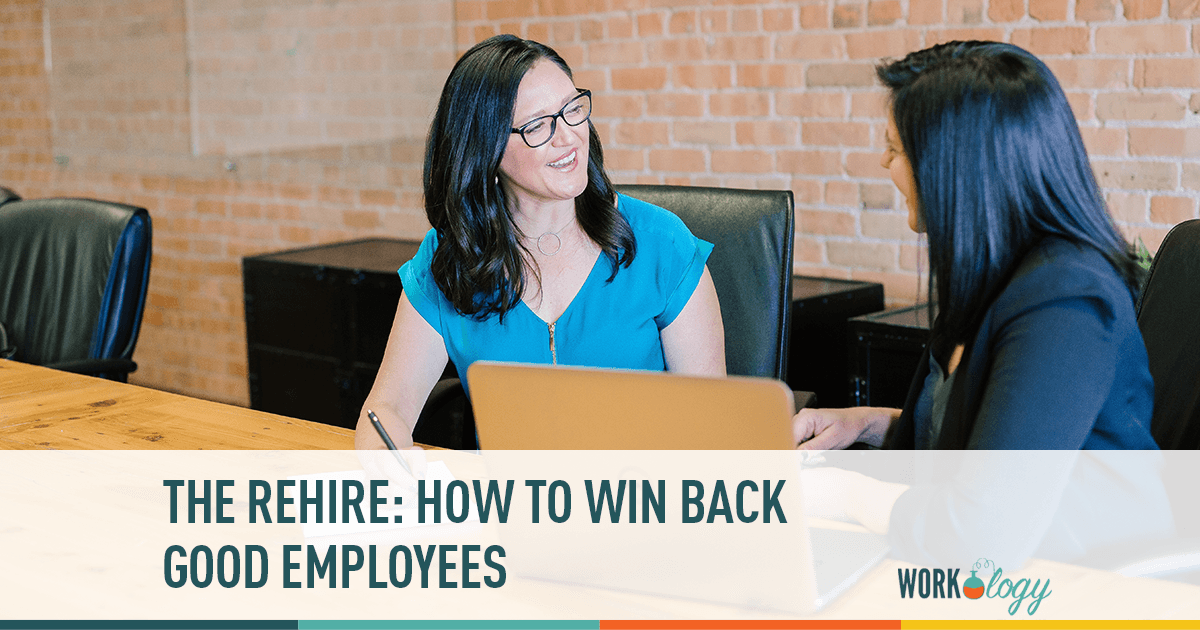 The economy is like a pendulum and appears to have started its swing back toward prosperity.  As a hiring manager or organizational leader, it may have been only a few short years ago you were scheduling meetings in regard to corporate layoffs. Layoffs cost your organization more than the size of its employees.

And, you lost more than productivity you can simply regain with the sourcing, hiring and training of a new body. Experience, insight and industry knowledge walked out the door with every pink slip. Today, you want to regain the momentum you lost, wind up and take off down the path of prosperity and growth.

Add the extra challenging of the talent that stayed the course with you through the slowdown is now being syphoned off by other companies, further weakening your company’s internal talent.  You need to add new talent. You need qualified candidates. You need them now.

You may be faced with the prospect of a rehire.

A rehire, often referred to as a boomerang employee is defined as someone who is a returning employee. Their role may be the same or different, but they left the organization at some point either voluntarily or involuntarily. They already understand the culture of the organization; they know what is expected and are familiar with the work environment.

The boomerang employee doesn’t just have to be a victim of a layoff. He or she could have left for what seemed like a greener pasture. Maybe they retired and realized they weren’t quite ready. Whatever the case may be, they used to work for your company and now don’t. But, having them back could mean a boost to your company’s productivity and talent.

I call this the Coach Snider Effect.

Rehires come in all shapes, sizes, and ages. Take head football Coach Bill Snider of the Kansas State Wildcats. Snider took the head football coaching job at Kansas State in 1989. What Snyder did for the Wildcats is nothing short of legendary and his list of awards and accomplishments through the years are amazing. In 2005, he retired and Kansas State moved on and the tradition amazing football KSU fans had grown to expect took an immediate nosedive. It didn’t take long for rumors of a return from retirement to start churning. And, in November 2008, Coach Snyder was rehired and returned to the sidelines in 2009 – a rare return in college football.

The same holds true for former Starbucks CEO, Howard Schultz who returned to lead Starbucks, the struggling coffee house chain in early 2008. Schultz returned to replace Jim Donald as the head coffee bean. Upon the head bean’s return organizational changes were made resulting in store closures, layoffs, and product offering changes. It seems that this boomerang made an impact as sales for Starbucks continue to soar since his return.

Another great example is with Jay Leno. In 2004, NBC brought on Conan O’Brien with the intentions of replacing Jay Leno as late night show host. Leno retired as host in 2009 ushering a new era as O’Brien took the lead spot. Ratings suffered and Leno was effectively rehired into his old position, debuting the new old Late Show in March 2010.

Should you bring back lost employees and is it a good idea for your company? Before you pick start sifting through past employee files, there are some things you should consider:

Continue to establish a line of communication. Keep the communication lines open with former employees often referred to as alumni. This could be through LinkedIn alumni networks or an alumni newsletter. Be creative but don’t badger.

Demonstrate value. This means giving something to your alumni community first that creates value, conversation, and discussion. Maybe it’s a free resume writing class or webinar.  Create value and put yourself in the shoes of your alumni network. What’s important to them should be what you’re writing/talking to them about.

Build a rehire database. Just like a talent pipeline within your organization, your rehire community and database should include ratings, information, and insights from previous managers and management. Build your most wanted list and target your must hires and re-hires.