The Internship Movie: A Reality Check 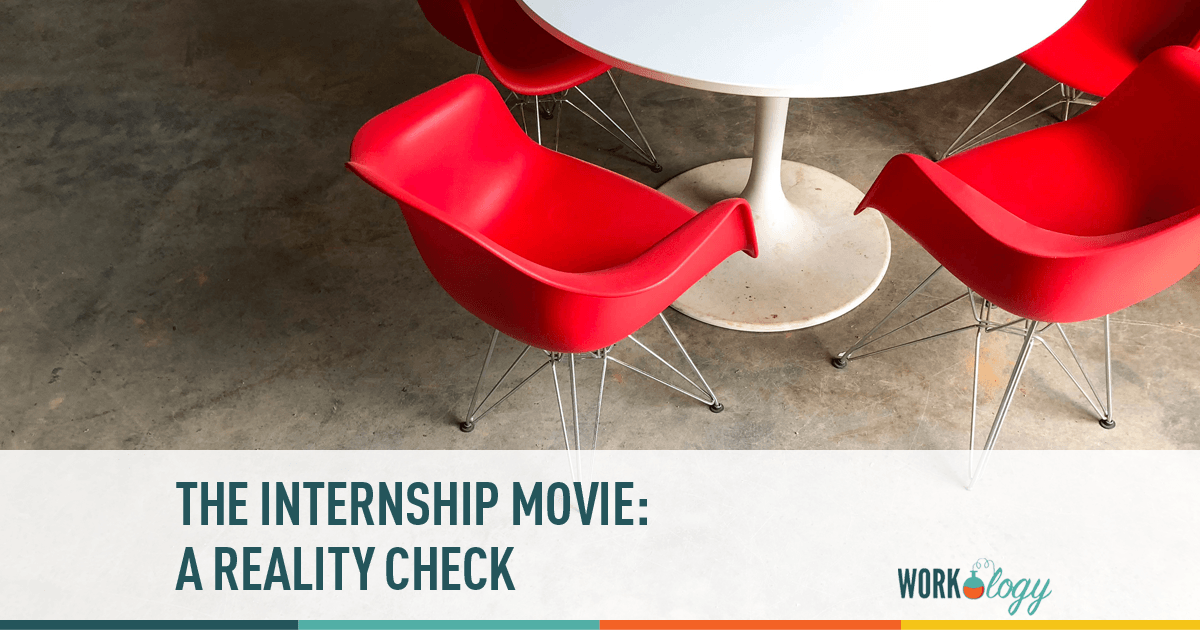 I spend my time coaching and writing about internships and careers for college students and new grads, so of course I had to see The Internship movie on opening weekend.  I found it amusing and downright funny in some parts and cringe-worthy in others.  What about the reality quotient? Just how realistic is this movie as compared to the real world of summer internships?

Reality Check # 1: Finding the internship. In the movie, Vince Vaughn and Owen Wilson’s characters found the internship position on the internet. They googled it of course. It is true that many college students turn to Google search to find an internship. However, it is typically the least successful way to go about finding an internship. Online job postings are often known as the “black hole” for good reason.  Based on my experience, most internship positions will be filled as a result of personal networking, college connections or campus recruiting. Analysis: Unrealistic
Reality Check # 2:  Use of Interview Technology. The interview is a critical step to secure an internship. In The Internship movie, they used Google Hangout for a remote first interview.  This is becoming increasingly prevalent.  Employers are also using Skype or video interviewing. Companies are using technology to meet candidates before a face to face interview.  It is far fetched to think that Google would hire Vince or Owen’s characters, but very realistic that they used Google Hangout for the interview.  Analysis: Realistic
Reality Check # 3: Importance of Teamwork. Vince Vaughn and Owen Wilson’s characters were assigned to a team as part of a Google internship competition. The winning team was to be rewarded with job offers at the end of the summer. Their team was composed of the outliers, the misfits and the unlikeliest to succeed. It was leadership and teamwork that enabled them to compensate for the lack of high-tech skills.  Employers today certainly want technical talent, but are also seeking teamwork, leadership, problem solving and communication skills. Analysis: Realistic
Should you see this movie? If you enjoy the Vince Vaughn and Owen Wilson team, then I think you would enjoy this film for some lighthearted entertainment. Don’t expect to learn HOW to find an internship at Google or anywhere else, as a result of watching this movie. The biggest learning takeaway is that the personal connections- like teamwork- are still what matter the most. This is true everywhere, even and especially at the top tech companies.
How realistic did you find The Internship movie?
Are you going to see it?

Sandra Long is the author of the bestselling book LinkedIn For Personal Branding: The Ultimate Guide. She is also the managing partner of Post Road Consulting LLC. Sandra and her team work with corporations, universities, and individuals to drive successful sales, career, and talent acquisition results.