The ABCs of Giving and Receiving Feedback 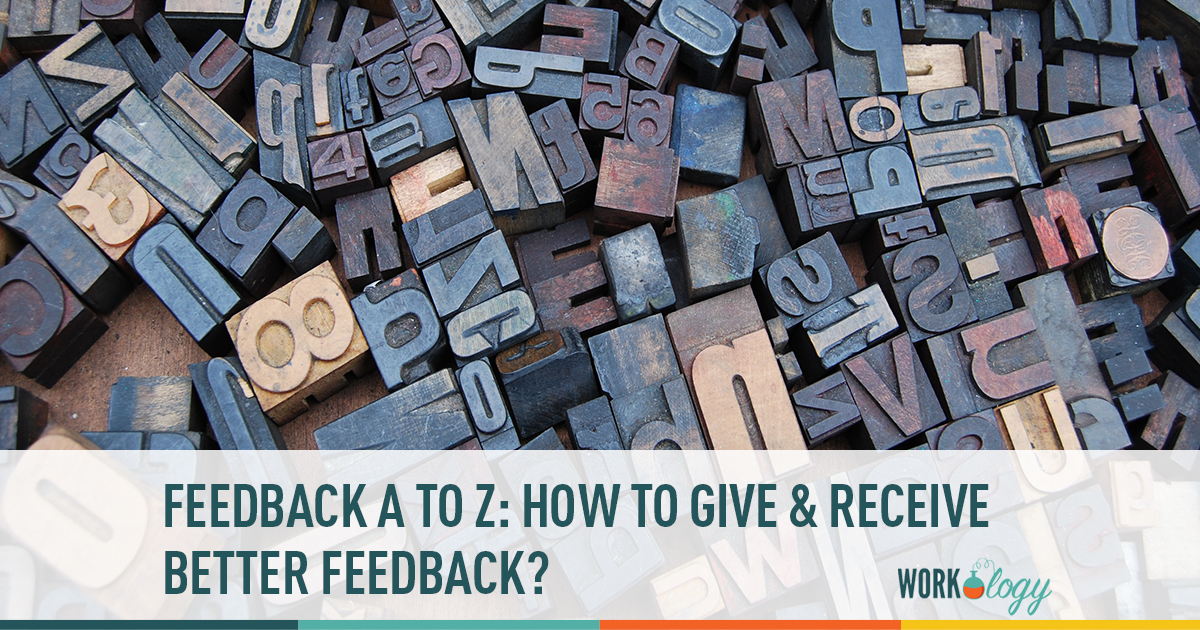 It’s no secret that feedback is a hugely important in the workplace. Giving and receiving useful feedback is a key part of both personal and organizational development. It impacts individual growth and allows people to work on self-improvement, whilst also pushing people towards organizational goals.

We’ve put together a handy overview: all you need to know about feedback from A-Z.

It’s important to decide whether feedback conducted with a tool should be anonymous or have names attached. There are perks to both: with anonymous, particularly upward feedback sometimes people feel they can be more honest with their responses, whereas non-anonymous keeps the conversation open, allowing for easier follow-ups. It’s important for you to decide which option your organization feels will benefit your feedback process the most and help your team work most effectively.

Conducting performance reviews is a helpful process when it’s as objective as possible. Unfortunately, there are some biases that can affect the credibility of reviews when not handled well. Biases such as the halo/horn effects, primacy & recency effects and stereotyping can impact how people conduct reviews and can have a huge difference in the feedback people give out, and make reviews less valid.

Psychologist Carol Dweck talks about mindset, specifically a ‘growth’ mindset compared to a fixed one. In terms of receiving feedback, mindset can make a huge difference. People with a fixed mindset see their intelligence and personality as unchangeable, so they are more likely to respond emotionally to constructive feedback as it’s like a personal insult. Those with growth mindsets will instead see feedback as an opportunity to develop and improve their skillsets. However, it’s important to keep in mind that people can change their mindset through practice.

This year, professional services network Deloitte joined the ever-growing list of companies ditching the annual performance review in favour of more effective practices. The company places emphasis on really ensuring that more regular feedback is of use and helps employees to develop.

How engaged people are at work can make a huge difference to their productivity, motivation and happiness levels at work. Creating a workplace culture that embraces the importance of honest, real-time feedback can make a huge difference in the way people perceive their life and role within the organization. Open, honest communication amongst all employees not only means people have useful feedback to help them improve but also that there is a feeling of trust and respect in the workplace. Implementing a great feedback culture will improve engagement in the sense it makes people feel they can offer input without judgement or backlash, and really help the company on its path to success.

No feedback process is complete without a follow-up conversation. Making use of people’s input means the whole process has a useful outcome. It can be effective to schedule follow-up meetings or simply make time to discuss feedback over coffee once people have had time to digest what’s been said. This means not only will wires not be crossed but that discussions as to how to best use the feedback given can take place, allowing for people to develop and work more effectively.

It’s important for a number of reasons to have goals to reach towards. Using feedback to help create goals can be a really useful process which means you take away key points and use them to establish your focuses for the next month, quarter or year, making the feedback process even more useful.

An open feedback culture creates a working environment where people feel they can have an honest conversation with their co-workers without fear of backlash. It’s a key part of maintaining a work culture which makes people feel comfortable and actively helps everyone improve and develop at the same time. If people are used to being honest with one another, giving open praise when applicable and constructive feedback when it’s needed, it makes for a productive, comfortable and constantly improving work environment.

After 360-reviews, there can be patterns in people’s feedback. For example if all of someone’s co-workers mention that they lack a certain skill or could improve in one specific area, it’s time to start working on those skill sets! Having specific skills to work on makes post-feedback development way easier and provides a good focus.

Juniper completely revamped their performance review process.  And they did something right: the changes they made resulted in 82% of employees feeling that their reviews were now valuable. The company eliminated ranking and instead just aims for employees to meet expectations of four performance elements, really put focus on people’s purpose and individual achievements and how feedback can impact future performance.

A key part of performance management is setting useful goals for team members. Using company KPIs to create goals can be a great practice, as it ensures people are on track not only to individual achievements but that those accomplishments align with organizational goals.

Having upward feedback in place is a great place to start in terms of leadership development. Managers receiving feedback means they are given an opportunity for development that they otherwise may not have had. Gaining feedback from team-members is a valuable opportunity to improve as a leader and ensure they way you interact with your team is as beneficial as possible for everyone.

With modern workforces being made up of a large amount of millennials, real-time feedback is more needed than ever. Millennials generally value more frequent feedback than previous generations and prefer to be updated on things in real-time, rather than having to wait for scheduled times to discuss their progress or achievements.

It’s important to separate feedback from your personal relationships with co-workers, particularly constructive feedback. Whether giving or receiving it, it’s key to approach feedback as something which aids performance and development, not as a personal attack.

Feedback should be a process, not an event. Approaching it as something which happens yearly only as a performance review, or stops outside of scheduled meetings means it becomes a task, not an ingrained part of company culture and can mean people become less willing to engage with it. Ensuring that feedback is a regular part of people’s working day is the key to making it useful, whether through use of a real-time feedback tool, regular 1-on-1’s with managers, or simply encouraging a culture where employees give open praise and are receptive to constructive comments.

Using feedback to create goals keeps a clear focus and keeps feedback useful. Setting professional development goals is a great way to ensure continued development and growth and an ongoing sense of direction outside of just day-to-day accomplishments.

Asking your team members for their feedback is one great step towards having a feedback culture which works. But it’s also important to ask them questions to follow up or add to the feedback you’ve already received from them. Ask people for their opinions on changing practices within the company, follow up the feedback they’ve given you by asking how they think you can use it to further improve, and generally let your team know that you value their input.

Feedback is most useful when it’s conducted within a useful time scale. It’s not so beneficial hearing that something could have been improved 6 months after it took place: discussing things in real-time means that actionable solutions can be found and feedback can actually be useful in establishing what can be improved.

Using feedback to establish goals for the upcoming period is an especially useful practice when you create SMART goals (ones that are specific, measurable, assignable, realistic and timely.) SMART goals mean that you have a great focus going forward and have something to strive towards that is useful and within reach, without being overwhelming or unobtainable.

360-degree feedback is on the rise in the modern workplace. And for good reason. Simply receiving input from managers is no longer enough. Getting an all-round perspective by gaining input from those you work closely with makes so much more sense in terms of being able to actively use feedback to improve.

An important part of 360-feedback is that it includes upward feedback: people are able to provide feedback to their managers and supervisors. This is a great opportunity as a manager to gain insight that otherwise wouldn’t be available with a conventional top-down only feedback process. Giving team members the opportunity to express their views and suggestions to managers means not only do people feel more involved and valued, but also that everyone, managers included, gets the chance to receive and respond to both positive and constructive feedback which helps them improve in their role.

It’s so important for people to know their work is valued and appreciated. Having a real-time feedback culture in place that means people get regular, timely updates on their work and achievements not only means room for improvement when constructive feedback is given, but also that people get to hear regular praise and appreciation when things go well.

While it’s a great practice to schedule meetings after performance reviews or when periodic feedback has been given, it’s also great to engage in weekly meetings with your team, either as a group or on a 1-on-1 basis to discuss any issues that have arisen, publicly praise what’s gone well and keep up to date with people’s progress and development.

Yearly Performance Reviews: A Thing of the Past

Annual performance reviews  are now widely accepted as a fairly useless practice. A conversation which only involves one manager and takes place once a year doesn’t make too much sense when it comes to being able to use feedback to improve daily practices and performance. Viewing feedback instead as an ongoing process which helps evaluate things shortly after they happen is way more useful and effective.

Research from Zenger Folkman found that 74% of people who received constructive or negative feedback were already aware of the problem raised and were not surprised it had been brought up. Keeping the conversation open with employees can make the difference between a team of people who are aware of their issues in the workplace but are unaware how to tackle them, and one which is on track to improving and overcoming issues and difficulties.