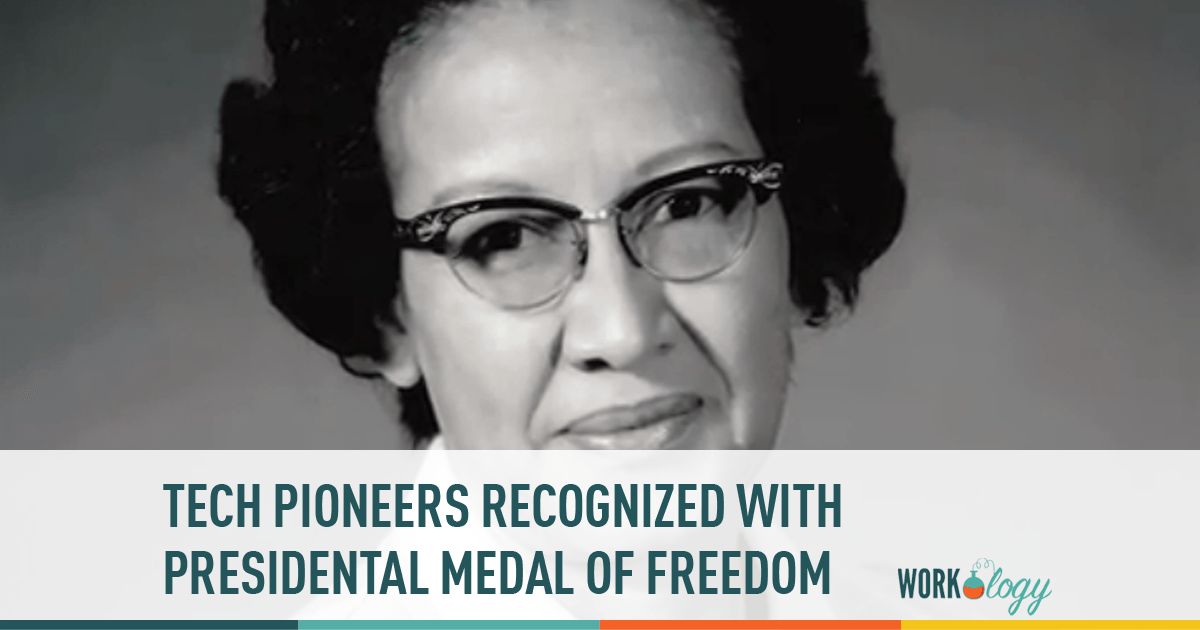 Yesterday President Obama awarded his last round of Presidential Medals of Freedom, to 21 scientists, artists, athletes and activists. Obama has awarded more Medals of Freedom than any other president and this ceremony came as a surprise to some — just months ago he held what most thought was his last Medal ceremony. In his speech yesterday he said that his joy in giving out this Medal comes the opportunity to honour those who represent the best of America.

Computer scientists Grace Hopper and Margaret Hamilton and philanthropist Melinda Gates were among the group and I think their inclusion deserves some special attention. Coding is now thought of as a bit of a boys club, so much so that there are hundreds of bootcamps and workshops dedicated to getting girls and women into the tech education funnel and keeping them in the field years down the road. But in the early days of computing, coding was considered women’s work. Men more commonly worked on hardware, a field then considered more prestigious.

Even as the computer age really got underway and we began to explore our solar system, there were plenty of female coders and mathematicians working in the field, but so often in the background, on the less prestigious projects. The new film Hidden Figures, due out December 25, shines a lot on some of the black women who did crucial work in the early days of NASA. (Go see it during your Christmas break — it looks great!)

Both Hopper and Hamilton were pioneering figures in early American tech, and while Hopper has lately become a kind of symbol of women’s contributions to tech — the Grace Hopper Celebration of Women in Computing conference is named after her — the “story of tech” that is taught in schools and pop culture still neglects so many significant women and scientists of colour.

Rear Admiral Grace Hopper, who passed away in 1992, worked on the Harvard Mark I computer during WW1, helped develop the mainframe computer program COBOL, wrote the first compiler and is responsible for the phrase “bug in the system.” Of Hopper, the White House said that her work “helped make coding languages more practical and accessible, and she created the first compiler, which translates source code from one language into another.”

During her tenure at NASA, Dr. Margaret Hamilton wrote navigational software for the Apollo series’ lunar and command shuttles. Or, as the White House put it, Hamilton “contributed to concepts of asynchronous software, priority scheduling and priority displays, and human-in-the-loop decision capability, which set the foundation for modern, ultra-reliable software design and engineering”

Awarding the Medal of Freedom to Hopper and Hamilton, and Melinda Gates, who has made education so much a part of her philanthropic mission, does much to honour the too often hidden contributions of women. These awards, along with those for performers like Ellen DeGeneres and Robert Redford and activists Eduardo Padron and Elouise Cobell, is a wonderful way for President Obama, in the last days of his tenure, to reaffirm his commitment to diversity and progress as American values.