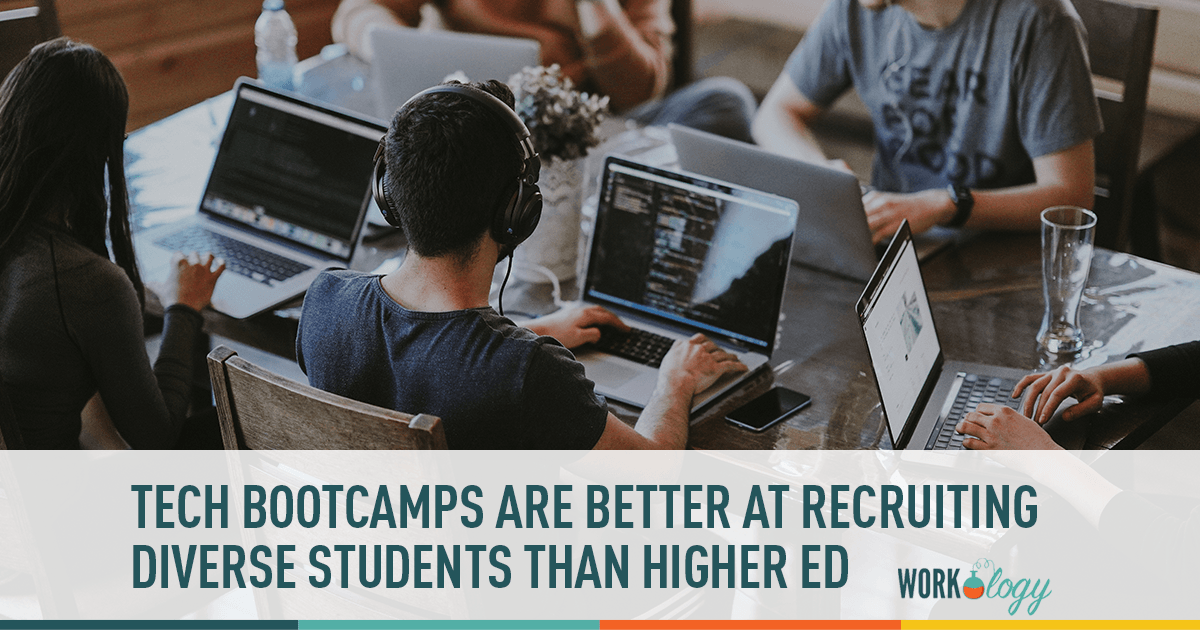 For-profit coding bootcamps have a more diverse student population than traditional colleges and they produce better career outcomes for these diverse students. At least, that’s what a new study by startup Course Report shows.

Why Is the Gap So Big?

Course Report’s study shows that bootcamps are more than twice as good at recruiting women and Latino students, and almost twice as good at attracting African American students. Even more importantly, they’re better at graduating diverse students and getting them jobs. 89% of bootcamp students secure full time employment within 120 days of graduation, with 66% being employed as developers and 38% reporting a salary increase. Why are they doing so much better?

While it’s true that higher ed is struggling to recruit and graduate diverse students, higher ed vs. bootcamps isn’t a one to one comparison. The Course Report study shows that the average bootcamp attendee already has a BA and has been working for 7.6 years. In other words, bootcamps aren’t in competition with undergraduate computer science programs; they’re attracting a different pool of candidates. Students aren’t choosing bootcamps over colleges, they’re choosing coding bootcamps over other forms of supplementary education. For the average bootcamp student, the programs help them to pivot an existing career — that is, bootcamps are very good at convincing people who otherwise wouldn’t or couldn’t have pursued a career in tech that there’s a place for them in the industry.

Unlike college programs, bootcamps are often geared toward specific underrepresented groups. A few years ago there were only a handful of organizations helping girls and women learn to code. Now there are hundreds. The same goes for racial and ethnic minorities, with more and more bootcamps helping people of colour graduate and find work in the tech industry. There are bootcamps for writers and artists. Bootcamps for small business. Targeted recruiting allows bootcamps to focus on the needs of students and their communities, and create a safer learning environment for minority students.

Information Is Beautiful has some great visualizations of just how un-diverse tech really is. The below image is part of a larger chart looking at population versus representation in specific parts of the tech industry. While Latinos make up 16% of the American population, they make up only 4% of the workforce in social media companies.

This is a complex problem, and one that can only be solved head on: by acknowledging the disparities and responding to them, without trying to explain them away. Bootcamps, especially programs that offer financial aid, are a practical response, and one that acknowledges that it isn’t just about recruiting diverse candidates, it’s about supporting them throughout the program, and helping them to have positive career outcomes after graduation.

Bootcamps focus on building skills and on career outcomes, and many have partnerships with accelerators or big tech firms. Their mission is to get you up to speed and working — quickly. Their focus is narrow, their programs are short, and their price tag, while variable, can be tiny compared to soaring tuition costs at universities. These factors make bootcamps an attractive option for people in established careers and for workers whose careers will be more adversely affected by taking time off — namely, women and precarious and low wage workers. A three-month bootcamp or four years out of the workforce, back in a college classroom with a bunch of kids? I know which option is more attractive to me.

Jeremy Rossman, co-founder of the Make School, told the International Business Times that these programs are “not worried about maintaining the sports stadium, they’re not investing in new dorm buildings, they’re not doing any of that stuff. Their only product is the education they provide, and as a result of that focus, they’re able to deliver a better bang for your buck and a better bang for the time that’s put into the program.”

Are Bootcamps the Answer?

Although bootcamps are significantly better at graduating diverse students and at helping them find positive career outcomes, they can’t do much for the women and people of colour who leave the tech industry five or ten years into their careers. They’re one answer, but not the answer — there is still lots of work to be done within the industry itself, in tackling the subtle forms of discrimination that discourage workers from seeing themselves as part of a team.