The SXSW’er: 5 Types of People You’ll Meet at #SXSW 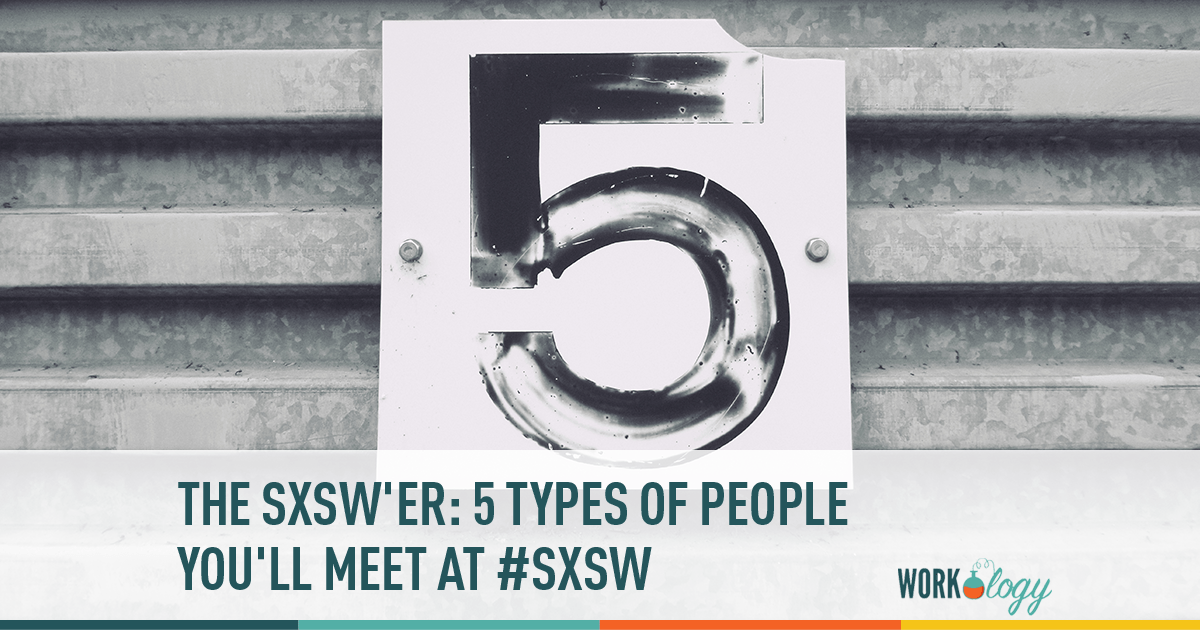 With approximently 50,000 SXSW’ers attending the three week festival (with 30,000 of them being at SXSWi) there will be several strange characters floating around the City of Austin. Not everyone is different and it’s possible that in the group of people you attend with each will have their own style for attending the largest music, interactive, and film festival in the country. What do these people look like? We’ve come up with a list of 5 different types of people you’ll meet this year at SXSW.

The “Sessions are Gold” SXSW’er

We’ve all seen these people. They’re almost overly OCD with their schedule of each session they want to hit. You can’t distract these people and they are absolutely sure they have enough time to break and get a front seat. Speaking of front seat, you’ll see them as close to the front in each session taking notes and asking as many questions as the time slot allows. They’ll be up early to hit the 8AM sessions and won’t stop till their last session around 5 or 6 and sometimes even later. Don’t ask them if they want to break and go explore Austin because they won’t, it’s sessions all day, everyday.

The “Where are the Open Bars” SXSW’er

Happy Hour is constantly on their mind and you’ll probably see them wake up late only to start drinking before they hit maybe one session per day. That session will have to be timed perfectly so they can maximize all happy hours and parties that have open bars. These people are fun to hang out with and are the opposite of the latter SXSW’er, but they can definetly be tiresome. Make sure you’re willing to stay out late and wake up late when you’re with these people.

The “Your Network is My Network” SXSW’er

Been there, done that. Last year I bypassed so many lines because I knew influential people in the space. My favorite was when I got to bypass the line at the Mashable tent because my friend Perri knew the people who were running the line/tent. There was a good amount of rain happening and there were at least 100 people in line waiting to pet, wait for it…., GRUMY CAT! Well luckily, I didn’t have to wait and we got in and took lots of pictures before anyone was allowed in. That was a major win! Be nice to these people, they’re usually fan girls/boys.

The “Doing it ALL” SXSW’er

I tried to be this person last year. I went to conference sessions, networked with industry leaders, and went to parties and clubs at all hours of the night. What did it do? I was extremely burnt out by the second to last day of the conference. I changed my flight and went home early because I tried to do it all. My advice? Balance yourself. Take enough time to go to a few sessions a day that you love or can’t live without and then balance it with dinner and drinks after and a few parties. Make sure to sleep enough because lack of sleep will easily accumulate over the course of the week. Enjoy yourself!

We’ve all been there once. The virgin. The newbie, the noob. I was the virgin last year and tried to do it all, see it all, and be apart of it all. Be sure as a virgin to take it all in and learn all you can. Whether you’re out till 4am partying like a rockstar or in bed by 10pm, leave a legacy or footprint on Austin and don’t be trampled by those who have been there done that for many many years.

People from all walks of life will stumble upon Austin, mess things up, learn a little something, and hopefully make lifelong connections, whether you’re the session go’er or the drinker — make something out of your stay in Austin, it’s blast and I wouldn’t trade the experience.

We left off the balanced SXSW’er because frankly, it’s hard and sometimes people just go to one extreme or the other. Which SXSW type are you? Mix of one, two, or three types? Let us know!

Get prepared for SXSW with additional reading