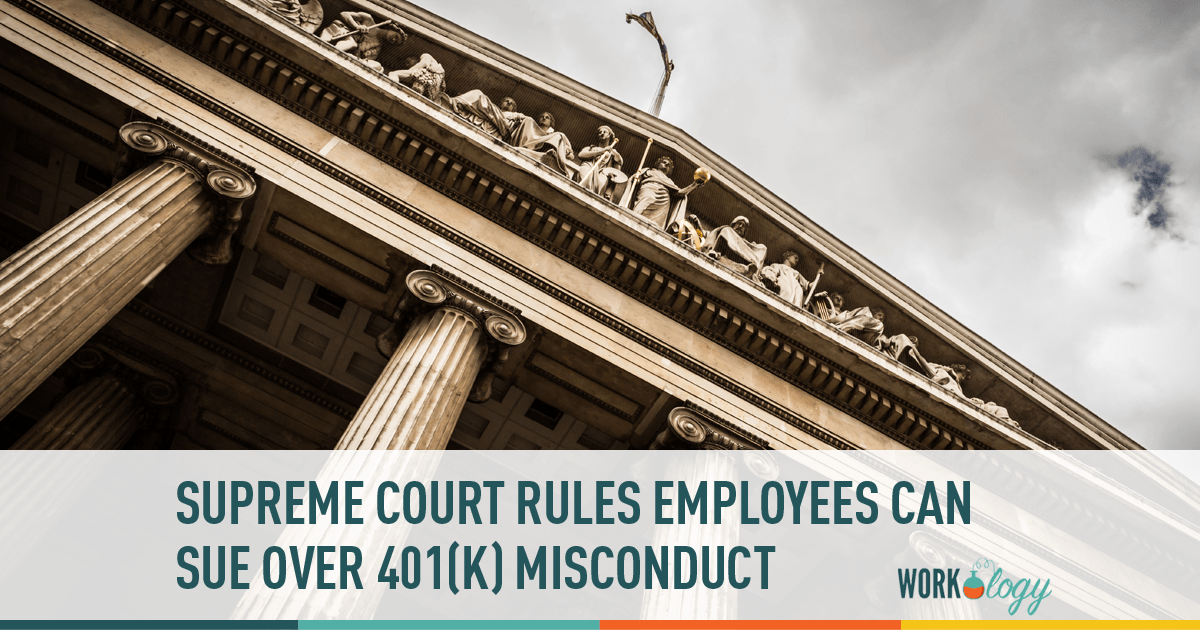 CEO and Financiers across the country may be feeling a shiver down their spines. Why? Check out this article from Truthout.

The Supreme Court handed workers a major victory yesterday by allowing them to sue over mismanagement of their 401(k) retirement accounts, in which more than 50 million employees have invested nearly $3 trillion.

The unanimous holding reverses a lower court decision that had barred individuals from suing over losses related to mistakes and misconduct, and thus had insulated employers from lawsuits even as more U.S. workers came to rely on the savings accounts to help fund their retirements.

In the opinion, Justice John Paul Stevens recognized that the landscape of retirement investing had been reshaped since the high court’s prior ruling on related issues more than two decades ago. Since then, individual plans known as 401(k) accounts have mushroomed as employers moved away from defined-benefit plans, or pensions.

As a result, Stevens wrote, courts should interpret employee benefits law as giving individuals the green light to sue over administrative problems with their accounts, rather than limiting cases to those that affected an employer’s “entire” retirement savings plan.

Yesterday’s decision will allow James LaRue to proceed with a case against his former employer, DeWolff, Boberg & Associates, over $150,000 in losses he claims he suffered after the Texas management consultancy failed to act on instructions to shift his retirement savings when the stock market hit turbulence more than six years ago.

In a telephone interview, LaRue, 47, criticized his former company for being “nonresponsive” when he asked to transfer his money from stocks into cash as the Internet bubble burst and the market plunged after the Sept. 11, 2001, terror attacks. LaRue, now a self-employed consultant to manufacturing and telecommunications companies, said his former colleagues at DeWolff Boberg were “hiding under the law.”

“There is a principle involved,” LaRue said. “Somebody stepped on my toe, and it’s wrong.”

The Labor Department and the solicitor general, who argues the Bush administration’s position before the Supreme Court, threw their weight behind LaRue. Assistant Solicitor General Matthew D. Roberts argued in November that any recovery by the plaintiff would benefit the company’s retirement plan as a whole in keeping with the law, known as the Employee Retirement Income Security Act.

Peter K. Stris, a professor at Whittier Law School in Los Angeles who represents LaRue, said the decision protected the savings of everyone with a 401(k). “If the lower court opinion had stood, it would have prevented the Department of Labor from pursuing claims when retirement funds had been stolen or mismanaged,” he said.

Business advocates predicted the ruling would unleash a raft of lawsuits by employees, particularly as stock market volatility once again is causing havoc with investment accounts.