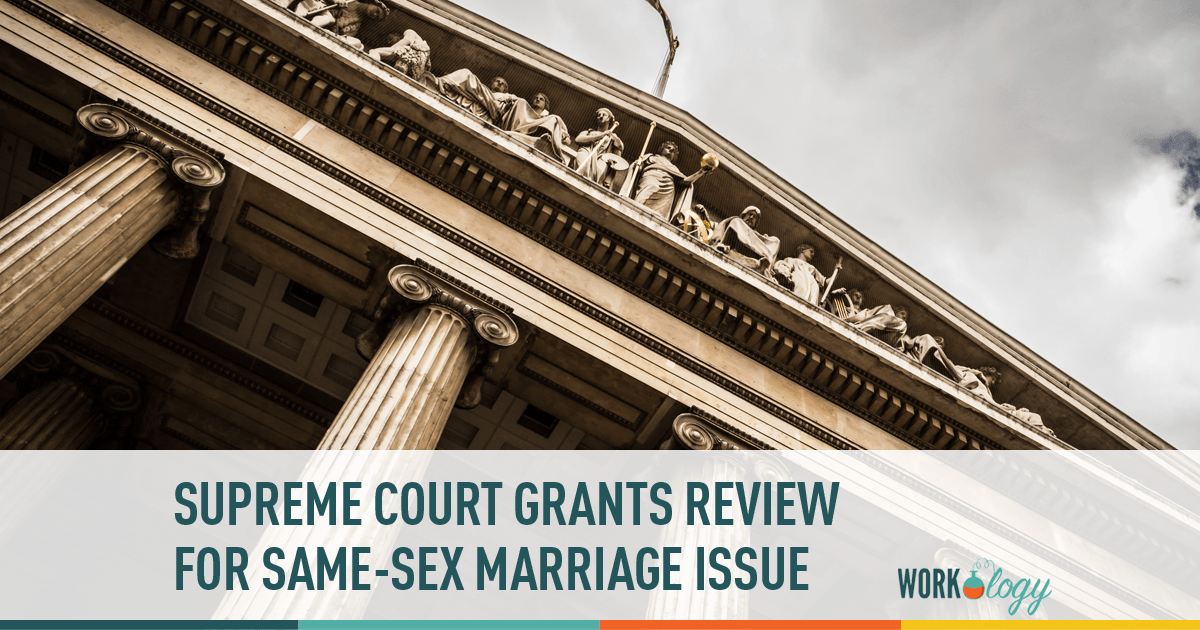 On January 16th, the United States Supreme Court agreed to hear appeals from Ohio, Tennessee, Kentucky and Michigan on the issue of same-sex marriage. If this sounds a little familiar, it should. In November, the Sixth Circuit Court of Appeals upheld different same-sex marriage prohibitions in Ohio, Tennessee, Kentucky and Michigan, going against the current federal court tide of decisions striking down such laws.

Interestingly (well I think its interesting anyway…), rather than allowing the appealing parties to frame the questions for review, like they usually do, the Supreme Court ask the parties to brief two separate issues, both revolving around the 14th Amendment:

Most of you (all of you?) are probably wracking your brain to remember the 14th Amendment from your high school history class. Let me save you the Wikipedia search.

The Fourteenth Amendment to the Constitution forbids states from denying any person “life, liberty or property, without due process of law” or “to deny any person within its jurisdiction the equal protection of the laws.” That second part is often referred to as the Equal Protection Clause.

While the Fourteenth Amendment was enacted to provide protections to former slaves after the Civil War, the Equal Protection Clause has predominantly been interpreted as requiring states to provide sufficient justification for treating people differently. If the state can provide a good enough reason for the differing treatment, then the challenged law or action passes constitutional muster.

With the Supreme Court framing the issue around the Fourteenth Amendment, it appears they are really asking one thing: do states have a good enough reason to treat same-sex couples differently from opposite-sex couples?

So far, the reason put forth by the states seeking to uphold their same-sex marriage bans have had little success. And quite frankly, those reasons will not find a sympathetic ear in the Supreme Court’s four liberal justices. As is typical in many hotly-contested cases, Justice Anthony Kennedy will likely be the deciding vote.

And Now We Wait…

If you recall (or just re-read) my post on the Sixth Circuit decision, you’ll remember I predicted that the Supreme Court would grant review in light of the circuit split (yay me!) and that the Supreme Court would decide, 5-4, that marriage is a fundamental right. While I still stand by my prediction that love will win out, and the 5-4 split, it appears that the Court’s decision will more likely hold that states cannot treat same-sex and opposite-sex couples differently, opening the door for states to offer marriage recognition to all couples or none at all. Now we just have to wait until June to find out…