Stop Using Management As a Reward 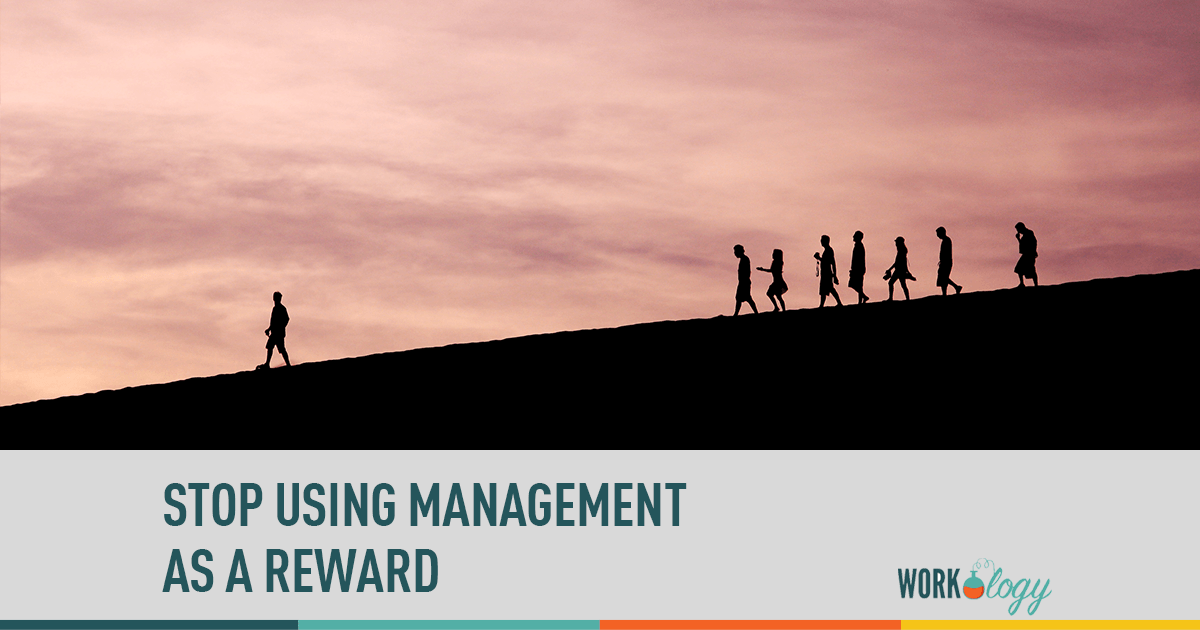 “Come work for our company!! Great advancement potential! Be a manager in 2 years!!” Does this language sound familiar? Sure it does. It’s probably part of at least half of all job postings out there right now. We love to dangle carrots, and this one is the macdaddy of carrots: promotion opportunities. I’m not saying that we can’t or shouldn’t market advancement potential as a company benefit, but I do have a problem with with the practice of making management an expected path for high performers. I’ve seen it happen too many times, and it doesn’t have the greatest success rate.

Been There, Done That

When I joined my current company, we had numerous managers who were struggling with what we were expecting of them. As we looked back at their professional path within our organization, we found that they were folks who were performing very well in their then-current role. And when a manager slot came open, we looked at who we had available, and selected them as they were the senior person or the best performer. It was the peter principle in action. And what happened when they became managers? Take a guess…

Fortunately, we were proactive enough to recognize the flaw in our model, and made some adjustments in how we hired for supervisory and management positions. And for the people who were already managers, but were clearly not cut out for it, we were open and honest with them and we offered them team member positions within our company. That way we could keep our good people, but open up the management slots for the people who should actually be filling them.

Leadership is a Privilege

But this brings me back around to the concept of promotion as a reward. Too often, companies get sucked into this trap. They have a high performer who wants to do more. They’re worried they person may leave and go to the competition. So what do they do? They promote them. I recently introduced the Simplify Leadership model over at my personal blog Working Title HR, and one of the statements I made there is this: Leadership is a privilege, not a reward. And as a company, we have a responsibility to ensure that we are bestowing that privilege on the right people. Failure to do that often has rather negative consequences to the new manager, but also to the other employees in the department who deserve a strong manager.

So What Can You Do?

There are so many ways we can recognize and continually engage our high performers without slapping “manager” onto their title.

Give Them New Responsibilities

High performers love to take on new things. One of the biggest demotivators for some is the lack of new challenges. So why not take advantage of that? Maybe preparing for and running a weekly team meeting is something the manager has historically been responsible for. Instead, consider giving the employee an opportunity to run these meetings. They’ll love the new challenge, and it can take a task off your plate.

Ask Them to Help Onboard New Team Members

High performers usually know their job so well, they can do it in their sleep. So why not tap them to be a trainer for new employees? Your employee will have a new challenge, and the new employee gets the benefit of being trained by a top performer.

Let Them Take a Lead on a Special Project

Do you have some projects that you’ve been meaning to get started on, but just haven’t had the time? Sure, we all do. What better way than to kill two birds with one stone? A project waiting to be done and an employee waiting to be challenged. Give them the reins, establish the program parameters, and let them have at it. Make sure to schedule times to check in with them, just to make sure the project is progressing the way you want it.

They May be a Management Candidate After All

One of the greatest benefits of doing some of these things, is it gives you as the manager an opportunity to evaluate your high performer for the next level. How they run the weekly team meetings, how they onboard that new employee, and how they manage the special project will give you a pretty good idea of how they can perform at the next level. Who knows, they could be your next management candidate.

Let Them Choose Their Path

The most important part of this whole idea is to empower your employees. High performers want to help shape their own path forward. So rather than just sitting down with them one day and saying “Today, you’re going to start doing _______,” ask them what they would like to work on. What is something they have always wanted to try? How can they offer more to the company? You better believe they’ll have ideas. And that’s a great place to start.

Keith Enochs is an HR-Training Manager in Lancaster, PA. He is also a blogger in the areas of leadership, communication, and culture. He is the founder of WorkingTitleHR. Find him on Twitter and Linkedin.