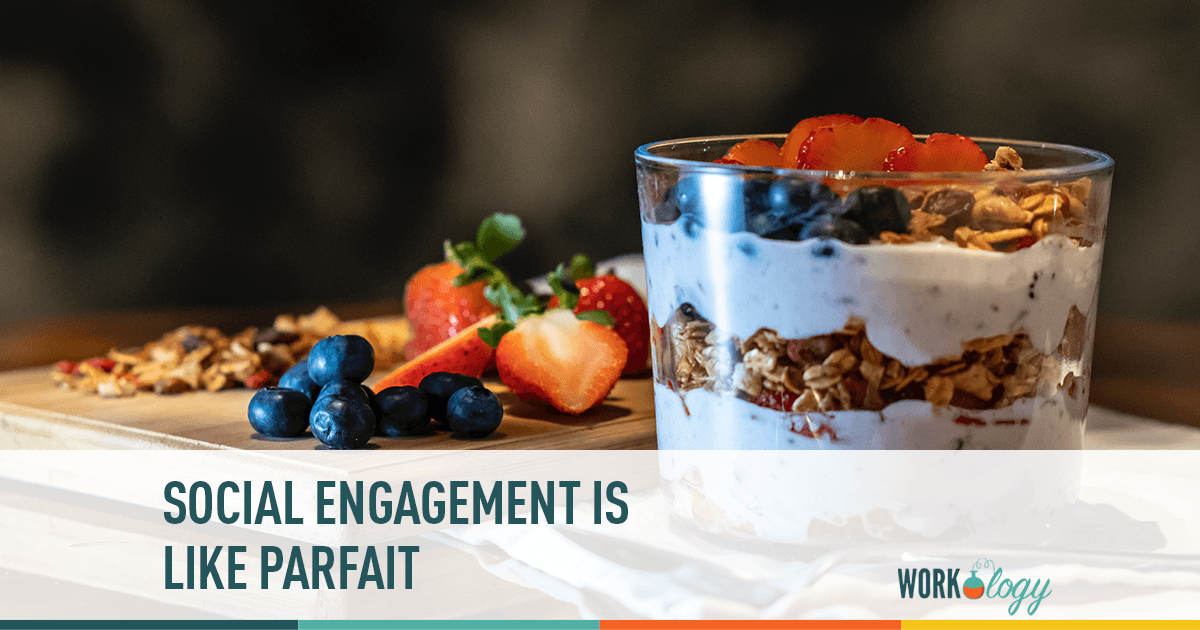 And Everybody Likes Parfait Especially at Work.

Yes, I just quoted from the movie Shrek, only slightly modified to fit the SHRM 2012 Annual Conference.

At the Annual SHRM Conference, I was asked to give my tip for 360 degree engagement. I really had to think about this one because there are so many tips for maintaining the relationships you build thru social media. How would I want to be treated by someone following me on the tons of platforms I seem to be part of?

Social Media & Leadership in & at the Workplace

As a blogger and social media consultant, I’ve heard as well as preached that engagement is multileveled. Introduction, interaction and participation are consistent actions. Let me repeat: ACTION. It’s not enough for you to just post tweets and FB posts TO your audience. You need to be part of that community. Focus on leadership at the workplace or in your work.  Talk WITH your audience. Newbies to social media who don’t know this concept or the trends tend to give up after getting an account on Twitter (more than 90 million Twitter accounts have zero followers; 56 million following zero other accounts). So many times, I’ve heard the lament, “I don’t understand Twitter. Why do I want to tell people what I had for lunch today? No one wants to follow me!”

Even being as engaged as I am, there are times when I really could do a better job of it. A few days ago, a friend complained that I had once asked a favor of her and then she didn’t hear from me again on Facebook. WHOOOPS, my bad. Properly chastised, I then had a look at my friends list again and realized I honestly could not keep up a daily conversation with more than 900 people at a time. My Twitter has almost 1,700 followers. I try my damnedest. Really I do.

I’m such an ogre some days.

This friend and I were part of a group which interacts every day! Did she not realize this? I admit I didn’t really strike up a conversation with her on her own page or thru personal message after awhile. We lost touch on a more personal level; it wasn’t enough for her. She wanted a more personal interaction.

How many times had I done this before and then lost a follower or killed a FB friendship or just unfriended a friend?  I need to remember that keeping up with so many is difficult. But even checking in every once in awhile helps keep those relationships going.

Keep up with birthdays you see on Facebook. Tell someone thanks for a simple post you appreciated. Go to a Tweetup to just say hi to people with whom you’re connected.

From now on, my mantra for social engagement will be this:

It’s a relationship, not rocket science. Make a friend, keep a friend. The Golden Rule of social media.
And if I haven’t talked to you for some time, lemme know. Engagement is a two way street.

Heather Dutcher is a Community Manager at Xceptional HR and Blogging4Jobs #SHRM12  Conference Correspondent.  Experienced in journalism, marketing, and college career services, she gets the bigger HR and workplace picture.   You can follow her on Twitter @heatherdutcher.  Look for her live tweeting the Annual SHRM Conference from @bloggingforjobs.