Snippets of the future from #SHRM15 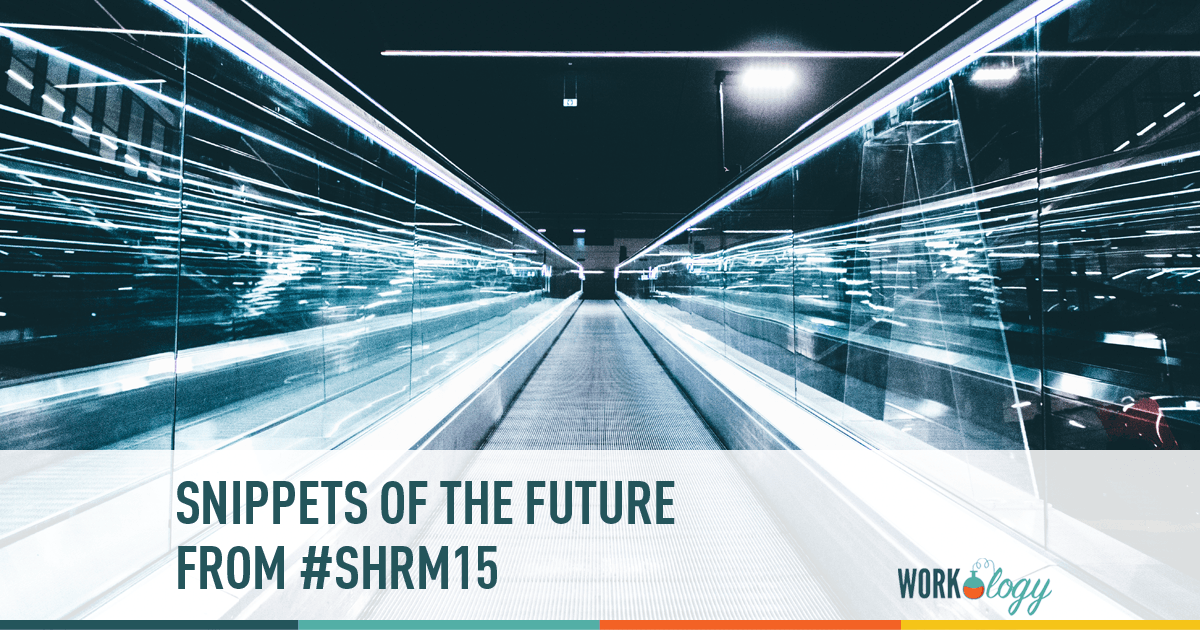 I had the good fortune to attend the #SHRM15 annual conference held in Las Vegas from June 28 to July 1, 2015. It was by most accounts an excellent conference. It certainly was for me. Since this blog post is supposed to have a future orientation I wanted to pass on some of the snippets about the future of HR I picked up while there.

As I have written a number of times the future of future of HR is interwoven with advancements in technology and use of big data and predictive analytics. It must also involve “high touch” in order to be effective.

If you want to follow the discussion search on Twitter for #smarterworkforce and you will find many, many quotes excerpted from the discussion.

Keynoter and entrepreneur Marcus Buckingham also talked about technology and its impact on the workplace and workforce. Buckingham is concerned with engaging and leading workers. In his discussion of how leadership can improve he said that we need to stop working on systems that benefit the company and work on things that benefit the employees. Once such system was a dashboard that allows leaders, at many levels, to pick a team and manage that team based on their strengths, weaknesses and ability to get along with each other. He said he got that idea from watching his son play FIFA Soccer on Xbox. He said his son had the ability to select players, move them around, and play them so that the strength of the entire team was maximized. He asked the question “Why can’t business do the same?” He believes that this type of gamification system will be the future of effective leadership.

It just so happened, that right after that presentation I met with Joe Weinlick of Beyond.com and we talked about the change in the candidate experience as a result of using mobile devices in their job searches. He mentioned that more and more job search candidates search via their mobile device and thus companies need to have their sites optimized for mobile. Unfortunately many do not, at least for the resume submission aspect of the candidate experience. Joe said that Beyond’s tracking has discovered that most job searchers initially look via mobile devices. However the resume submission process has to be done via a desktop. Obviously companies are going to need to be more adaptive. But the future of job search is going to very much be the mobile experience.

These were just a few snippets that dealt with future-oriented observations.