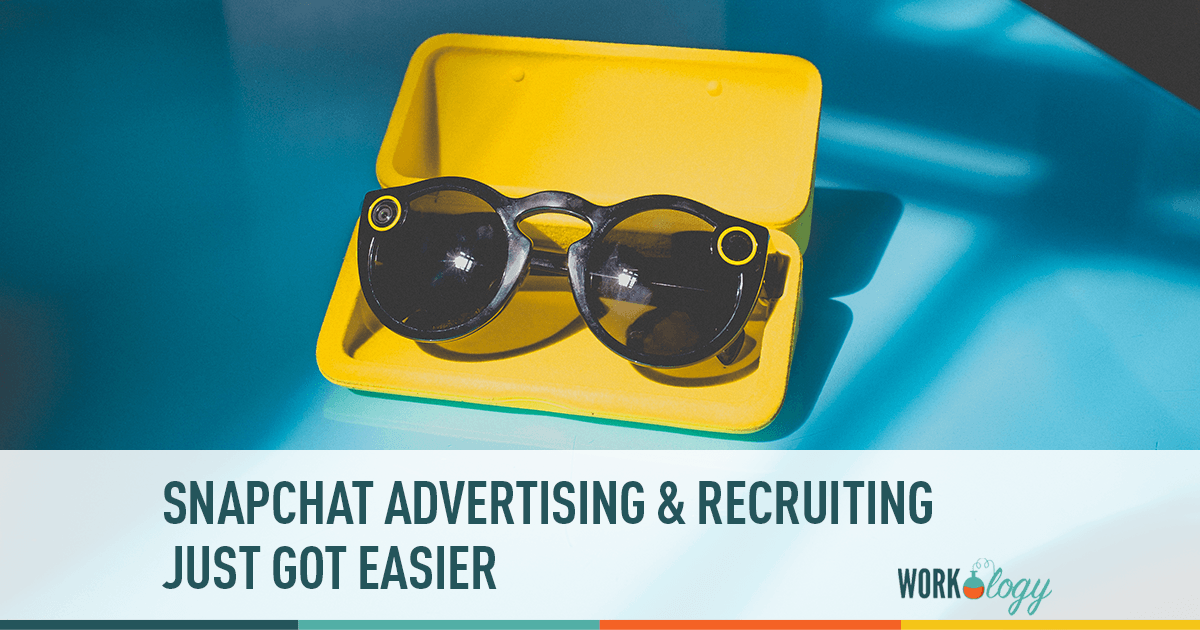 Click here to see 35 HR and recruiting pros on Snapchat.

Snapchat announced Monday that it would now place ads between snaps through its new advertising API, Snapchat Partners. Partners will make it as easy to buy ads on Snapchat as it is on any other social media platform, and the move to begin integrating advertising into the regular user experience — as opposed to their being siloed in a “media” section — dramatically increases the value of Snapchat ads.

If you weren’t already thinking about branding and recruitment on Snapchat, this should do it.

Snapchat Partners and API Change How Ads On Snapchat Work

Snapchat Partners includes three groups: Ad Partners, who will develop software for Snapchat ad creation, sales and analytics, Creative Partners, who will, well, create original ads, and Measurement Partners who will focus on user engagement. With so many players working to get the most out of Snapchat, this is a huge step forward for the company (potential revenue! new users) and for fledgeling Snapchat branders, who will have a much easier time settling into the platform going forward. Although more and more brands have Snapchat accounts, only one third of them are updating them regularly. Giving brands the tools they need to use the platform effectively and making space for a Snapchat developer ecosystem can change that.

Adweek goes into detail here about who is on board as Snapchat Partners and what their experience means for buyers and users — mainly, good things, since Snapchat has built relationships with experienced agencies that know what they’re doing. So chances are that when these new snap ads start appearing on user feeds, in a few weeks, they’ll be slick, well made and tonally appropriate to the platform. And, says Snapchat CEO Evan Spiegel, they won’t appear all that often. That’s important because the initial wave will have a lot of impact over how ads on Snapchat are received by users in the long run. Adweek reports that Snapchat is taking this seriously and will inspect every ad before it goes up.

Of course Snapchat users are already seeing ads and big ad buyers like Nissan and Gatorade have run Snapchat campaigns. Big media partners like Buzzfeed and Daily Mail Online have a big presence in Snapchat Discover. But its 2015 revenue was only $59 million — if it’s going to hit the $250 million in hopes to see by year end of 2016 and $500 million (or even $1 billion) in 2017, success of its advertising API and a positive experience of Between Stories ads is essential.

In addition to finally getting serious about analytics, sales and development, Snapchat advertisers will also have a new suite of tools to engage ad viewers. Advertisers will be able to customize their content so that users can be directed to websites, articles, longer embedded videos and even apps.

But Do I Really Need to Be On Snapchat?

But it’s certainly worth exploring the possibility. Especially since more and more HR practitioners and recruiters are active on Snapchat, exploring ways to build their personal and employer brands.

It’s the fastest growing social network, especially month 18-34 year olds, it’s seen a 350% increase in user activity in the last year but its user base is still small enough that you can make an impression, and it’s made for sharing stories and building relationships through storytelling. That makes it a perfect platform for personal branding, which is why we’re seeing more and more entertainers and entrepreneurs (and teens!) active on the social network.

It also makes Snapchat ideal for corporate and employer brand building. Snapchat stories slowly build engagement and reveal information incrementally with each new snap, which is exactly what you want a video ad campaign to do. The ephemerality of snaps means that viewers feel like they’ve had the chance to see something special and unique. After all, not everyone got to view and engage with that story — just your 15,000 followers! And Snapchat even offers you the chance to build one-to-one relationships with followers through story reply private chats.

All of this means that although most companies aren’t yet on Snapchat, that’s changing rapidly. And that’s not just thanks to updates like its new advertising API but also thanks to the Snapchat team reaching out to them. The company is moving quickly and confidently toward a likely IPO and Snapchat Partners offers it a chance to build a reliable source of revenue beforehand. So if you’re wondering if you’re “too old” for Snapchat — stop. Snapchat wants you. And your ad dollars.

Click here to see 35 HR and recruiting pros on Snapchat.