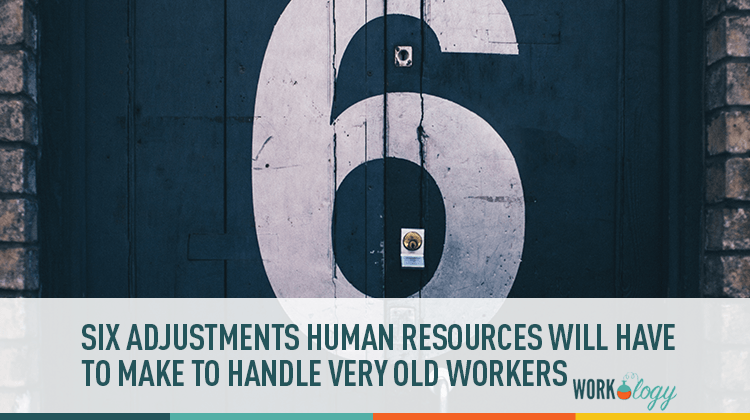 In an issue of HRMagazine there was an article called “Invest in Older Workers.” I am not going to write about that article but I thought it was interesting given that I am writing about older workers, very older workers. What would your company have to do if your employees kept their jobs until they were 100 years old? Are you prepared for very old workers? Here are six adjustments HR will have to make.

The reason I ask that question is that scientists say they are on the verge of “curing” the aging process. Aging is a process of wear and tear on the body. What if there was technology to offset the effects of that wear and tear. According to anti-aging activist Aubrey de Grey, quoted by Dick Pelletier in his article End of aging within reach, experts say, we “could remain healthy for millennia without fears of dying from old age.” Pelletier says “Aging is a destructive biochemical event, experts say, and scientists are on the brink of developing interventions for all of its life-destroying processes.” He goes on to say “Most forward-thinking scientists believe the goal to end aging is technologically achievable, and it could be reached in time to benefit many people alive today.”

Author Ray Kurzweil, who wrote the book Fantastic Voyage: Live Long Enough to Live Forever, confirmed that we are in early stages of an anti-aging revolution. “By 2020,” he says, “biotech upgrades will add more than one year of life expectancy to our lives each year.” Think about that in just seven years from now we all have the possibility of living longer than ever before.

Pelletier extends this concept beyond the near future to a bit further out by saying:

By 2035-to-2040, advances in molecular nanotech and an explosion in artificial intelligence hold great promise to unravel the mysteries of consciousness, while increasing intelligence a billion-fold. Experts predict this will enable replacement of much of our biology with more durable non-biological tissues.

Of course much of this advancement may not have a major impact on my age cohort, the Baby Boomers, and how we interact with the world of work, but Gen X and Gen Y and all those that follow will have significant opportunities. How will this affect the world of work and HR?

There are a number of implications for how work will be viewed and there will be many things HR will have to be prepared to deal with. In my view these include:

Ponder that one for awhile.