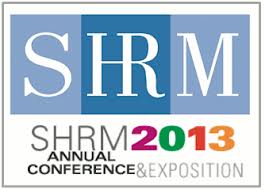 In case you missed our #SHRM13 Recap Day One, you can read more about it and the keynote that everyone was dying to see, Hillary Clinton.

Another year has gone by where HR ladies (and gentlemen) have flocked to the annual conference for the Society of Human Resource Management. We saw keynote speakers from Blake Mycoskie, co-founder of TOMS, to Mark Kelly & Gabby Giffords, and the ever-so-popular Hillary Clinton, former Secretary of State. With all these exciting speakers coming to Chicago it was impossible not to be overwhelmed by session after session.

Monday afternoon was filled with random flash pizza parties (thanks to TalentCirlces for sponsoring) and sessions that would amaze anyone in the industry.

My favorite Monday session was over the neuroscience behind growing talent. The speaker, David Rock, spoke over different types of mindsets and attitudes we have in the workplace that play a huge role in not only retention, but the growth of companies. Be sure to stay tuned to Blogging4Jobs in the coming weeks as we deliver several topics over this one session. It’ll take that much and more to fully appreciate the entire session.

On Monday night DJ Jazzy Jeff took the stage at the official SHRM & Glassdoor party to deliver a performance that had everyone sloshing drinks and having a great time. The party was thrown at the House of Blues in Chicago, IL and everyone that was anyone in HR was throwing it back to the 80s style rapping & disc spinning.  As a millennial, I drank and watched all the HR ladies as they let go and danced like it was 1983.

After a crazy night of partying (to see more follow the hashtag #crazyshrm on Instagram & Twitter) day three of SHRM for me personally was filled with sessions encompassing HR legislation and other legal matters. The first session I attended was from the Vice President of Government Affairs for SHRM, Michael P. Aitken, who spoke on upcoming legislation and the overall impact it had on the Human Resources industry. His main focus was immigration reform that is a major topic in the 113th Congress. The other favorite session I attended was over gender identify in the workplace and the battles won and lost over creating a workplace full of equality. These are heavy topics and we will be blogging about them in the near future.

Tuesday night was amazing. Started off by the Blogger Party in the Dice/Open Web Bloggers lounge then followed by the one and only Kelly Clarkson. The concert was beyond amazing. Her most known songs, Breakaway, Stronger, Mr. Know it All, among a few new songs were sung and I had a blast. If you want some video on it, just ask and I’ll send them your way! For a quick taste follow this link to see her new song which debuted yesterday.

Wednesday was less crazy as the other days of SHRM. Everything was winding down, but before most jumped in a cab they stopped by to see Mark Kelly & Gabby Giffords for the last keynote of the conference. After delivering a powerful and inspiration speech those who went to it left energized with a sense of the “I can do anything” spirit.

After that session I made my way up into an area of the McCormick Convention Center I had never gone to see Eric Mosley, CEO of Globoforce, give a fantastic speech over crowdsourcing the performance review. He spoke on the many levels of performance reviews in the workplace and how each review impacted the growth and retention rate of your employees. A happy workplace fosters an attitude of productivity.

Soon after his session I left for Midway International Airport to make my way back home to Denver, CO. Now I am sitting on the plane writing this recap for everyone who wasn’t able to attend. If you haven’t been to a SHRM or didn’t come this year, start saving up because next year will blow your mind!

We had fun! Did you?

Feel free to let us know your favorite conference session or activity in the comments! See you next year for #SHRM14 in Orlando, FL June 22-25, 2014.