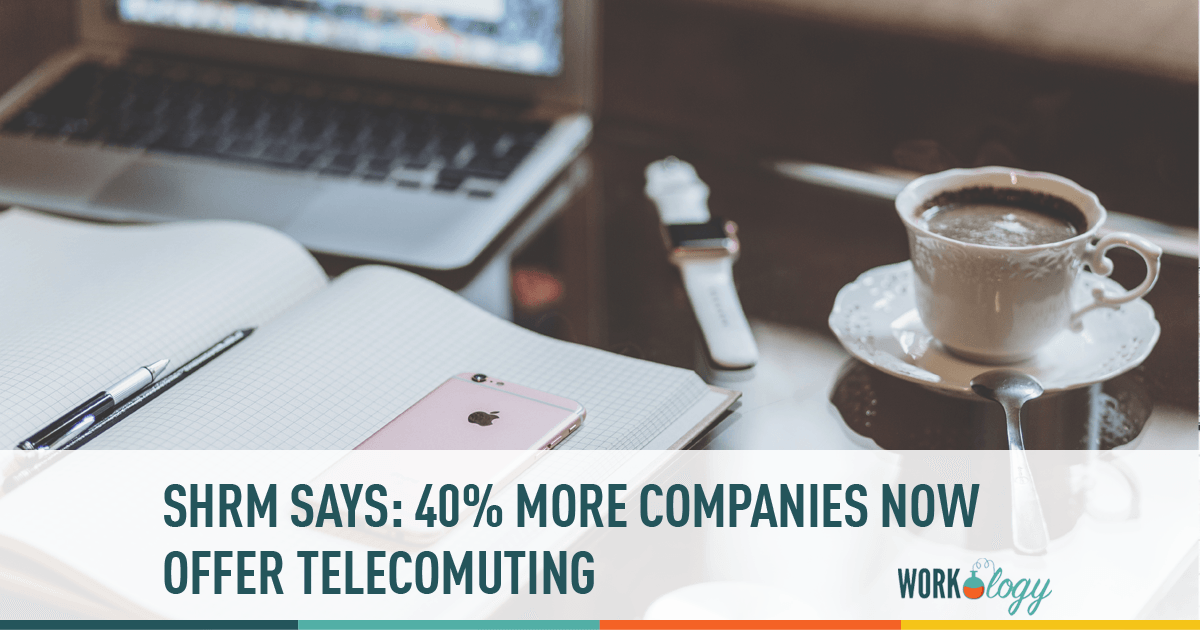 According to SHRM’s 2016 Employee Benefits Survey, published today, 40% more organizations offer telecommuting in 2016 than in 1996.

It’s not that I didn’t expect to see a dramatic increase in telecommuting reflected in the survey. We know that telecommuting is both more common and more in demand from employees. Too, the SHRM survey spans 20 years and technological change during that timeframe has made telecommuting easier and easier with each passing year. But 40% is a big increase and, in fact, the change in telecommuting is the second biggest change the SHRM survey notes. Only the 47% decrease in companies offering credit union membership is more significant. No other stats in the survey really come close to those two big, dramatic shifts in employee benefits.

Telecommuting Is About More Than the Technology

According to the SHRM report, it’s not just Millennial employees who are pushing for flexible work arrangements, it’s also employees who are 55 and older. Both groups have, in recent years, prioritized work-life balance and pushed their employers to be more flexible. Older workers who have established careers often have more bargaining power when negotiating for flexible work arrangements in corporate environments. But Millennials have the advantage in startup environments where they dominate the employment landscape, and many companies are willing to go far to cater to top talent. That two disparate groups are pushing for telecommuting and other kinds of flex arrangements means that employers — all kinds of employers, from small to large business, startup to corporate — have had to respond. (It makes me wonder what else these two workplace demographics have in common; where else their needs align.)

What I wasn’t expecting to see in the SHRM report was that as telecommuting increased, other forms of flexible working benefits decreased or showed no change in popularity. Where telecommuting is so much more commonly offered, job-sharing decreased by 14% and only 3% more organizations offer a compressed workweek. Flex time and sabbaticals are increasingly popular with workers, but parental and sick leave are still among their highest priorities — and areas where many workers are feeling underwhelmed by what’s available. Family and leave benefits decreased across the board. Only lactation support services (most commonly rooms set aside for nursing mothers to pump breast milk) saw growth between 1996 and 2016, and then only a paltry 1% increase.

Telecommuting is by far the most common form of flexible work arrangement and it may be because it can represent a significant cost savings for the company. It doesn’t require an investment in new infrastructure or equipment, but rather allows companies to downsize their office space. It doesn’t create disruptions in staffing levels or disrupt the typical work week, but rather expands it, since telecommuting workers tend to work longer hours. And as the enterprise software business turns its attention more and more to internal social media and managing remote teams, it’s never been easier or cheaper to offer telecommuting as an option.

Telecommuting, once you get over cultural barriers is, well, easy. Other forms of flex arrangements can be more complicated and increasing health benefits, for all that this represents a significant draw for talent, can be costly. Flexibility stigma has waned in recent years, making it easier to for workers and managers to advocate for it. Its growth is a result of a happy alignment of a favourable cost-benefit, technological advancement and the real need of employers and employees. Telecommuting is so much more common because it’s cheap and effective and what people really want. Unfortunately, that same kind of alignment of interests hasn’t happened around other kinds of benefits.