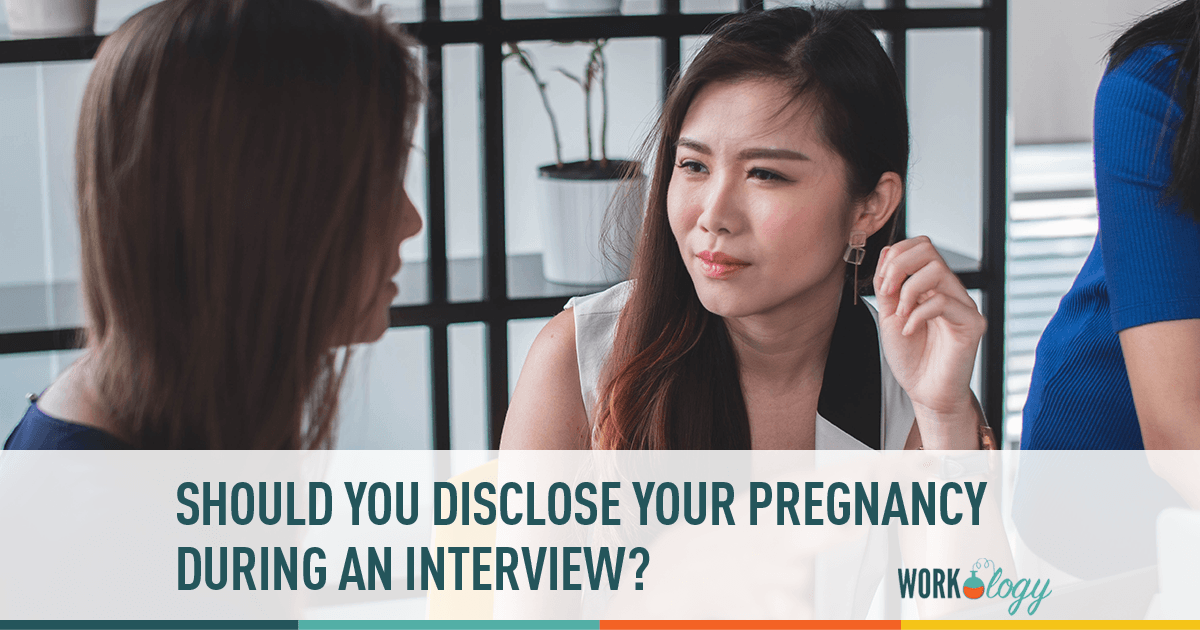 Having job interviews while you are pregnant presents a difficult dilemma. Should you disclose the fact that you are pregnant during the interview, or should you wait until the baby’s been born and you’re knee-deep in disposable diapers? It’s a situation that comes up fairly often, and there is no one correct answer for every situation.

Consider the following points as you mull over your decision.

You’re under no obligation to disclose anything personal about yourself, and the potential employer shouldn’t ask anything personal, either. However, things can get a little awkward if you’re unwilling to share anything personal during an interview, and putting up a wall on this front will prevent the interview from developing into an easy conversation – something that often makes a lasting, positive impression on an interviewer.

A potential employer is just that – potential. Nothing is definite until you’ve been offered and agreed to the position, either with a handshake or a contract. So, until you’ve been extended the offer of a job, there’s no technical obligation to disclose your pregnancy or any other state.

If you are obviously pregnant and the interviewer’s eyes are alternating between your large belly and your eyes, you are probably better off acknowledging the elephant in the room (no, it’s not you; it’s the situation). Being honest is important during an interview, and trying to hide something that’s easily discernible may make your interviewer think you are hiding other things as well.

You might want to disclose your pregnancy because you could find out afterward that it doesn’t matter at all to the employer (even though technically it shouldn’t matter, and lawfully it can’t make a difference). But sometimes a potential employer actually does have a heart, and may think more highly of you when they see you in a motherly light. It’s possible, and it does happen.

Legally, you’re covered. If you get the job and your new employer finds out later (as they will) that you didn’t tell them about your pregnancy during the interview, they cannot fire you without making themselves vulnerable to a lawsuit. But it won’t help your credentials with your new employer or your coworkers, so be prepared to face a few cold shoulders, just in case. That’s just the reality of human nature.

Your new boss might ask why you didn’t tell him in the beginning. Photo Credit.

According to the law, you won’t be eligible for unpaid maternity leave under the Family Medical Leave Act because you will have worked for your new employer less than 12 months. That’s a big deal, so you may want to think twice about taking the job before you give birth. But maternity leave may not be a critical part of your family plan, which is sometimes the case, especially if there is another caregiver who works from home.

If your pregnancy will prevent or inhibit you from performing the job duties of the position for which you are applying, you still are under no lawful obligation to disclose your pregnancy. However, you may be prevailed upon to do as many of those job duties as you can, which may or may not put your pregnancy at risk. You can technically refuse, but again, this creates a hostile working environment that will cause you unnecessary stress during what should be a peaceful time of your life.

Climbing a ladder, corporate or otherwise, is not advisable for pregnant women. Photo Credit.

The choice is personal, and it’s just the first of many important decisions you’ll be making as a new parent. The best answer isn’t on the Internet, and it isn’t in the law books. It’s in your heart. In the end, do what you feel is best for your own welfare and the welfare of your unborn child.

What do you think is best? Disclose or not disclose?

Kate Supino is a professional freelance writer and mother who writes extensively about family-friendly activities and fun kids' supplies. For comments, you can email the author at katesupino@gmail.com. View her Linkedin profile.