Should You Abandon or Embrace Non-Competes in Hiring? 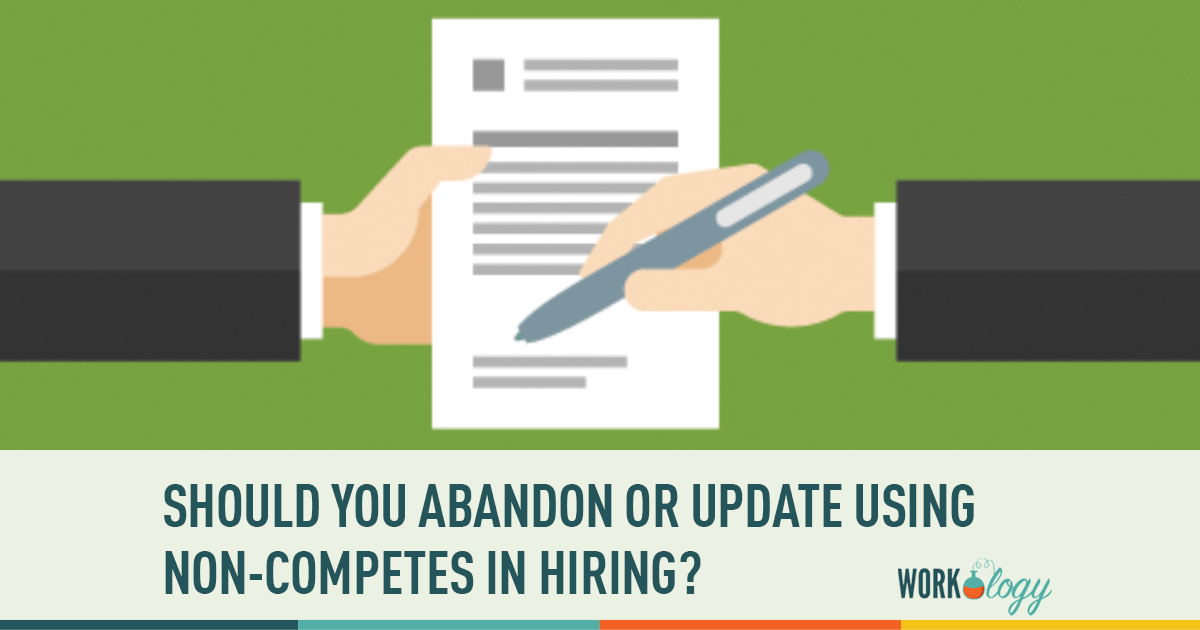 Should You Abandon or Embrace Non-Competes in Hiring?

What are Non-Competes Used For?

Non-compete agreements—the legally binding documents that many businesses require employees to sign to prevent them from leaving to work with an organization’s competitors, usually for a specified period and in a limited geographic area—are a hot topic in an employee-driven economy, particularly in an era when most employees aren’t staying with the same company for an extended period of time.

About one in five U.S. workers—28 million people—currently function under noncompete agreements, according to a 2017 study by researchers at the University of Maryland and the University of Michigan. And nearly 40 percent have been required to sign one at some point in their careers.

In the face of new technologies being introduced on a daily basis, a non-compete has become an essential part of the technology sector. In states that permit restrictive covenants, non-competes are essential to maintaining a competitive advantage and helps to discourage employee espionage. In competitive industries, especially in sales environments or industries where the information is extremely valuable, a non-compete is a best defense against your competition when your employee leaves an organization.

I have used them in my HR career as a scare tactic for sales professionals so they wouldn’t take their sales territories and customers with them. And if I had a particularly good salesperson who leadership thought might steal customers, I would have the legal team draft a standard letter reminding the exiting employee of the non-compete.

But typically, non-competes are old school. They just don’t hold up for most employers. Personally, I think they’re not very effective and can open the door for bad press if a company chooses to pursue legal action. One example is IBM’s recent legal drama over their Chief Diversity Officer and the non-compete.

IBM filed suit against one of its longtime executives, Lindsay-Rae McIntyre, alleging that her new position as Microsoft’s chief diversity officer violates a year-long non-compete agreement, allowing the company to use IBM’s internal secrets to boost its own diversity efforts. McIntyre was at IBM for more than 20 years, most recently as HR VP and chief diversity officer. Announcing her hire, Microsoft said she would “drive a multitude of existing cross-company initiatives to further Microsoft’s progress in building a diverse and inclusive culture.”

However, IBM claims in its suit that it will be “inevitable” for McIntyre to use IBM’s trade secrets against the company. Bloomberg cites a court filing in which attorneys for McIntyre describe the non-compete clause as overbroad. “IBM surprisingly seeks a draconian temporary restraining order and preliminary injunction to prevent McIntyre from working — for an entire year, in any position, anywhere in the world, for any company IBM deems to be a ‘competitor’ in any dimension,” the attorneys wrote.

California-based Employment Counselor, Mediator and Trial Lawyer Mary Wright, Partner at Wright & Supple LLP, says that “employment laws are a bit different in California.  Employee post-termination non-compete agreements are per se void in California under Business & Professions Code §16600 even if they meet the federal test for enforceability by being reasonably limited in time and geographic scope.  And the ‘doctrine of inevitable disclosure’ being argued here by IBM (where it is presumed that a newly-hired employee will inevitably disclose (or use) their former employer’s competitive information at the new job) has been rejected as a restraint of competition and an end run around Section 16600 by the California courts. “

Wright continues, “Nonetheless, if the diversity material is a protectable trade secret, a California Court could still enjoin McIntyre’s conduct because the state’s Uniform Trade Secrets Act prohibits ‘threatened’ disclosure of trade secrets on grounds virtually identical to those used in other jurisdictions to prohibit competition through application of the Inevitable Disclosure Doctrine.  In IBM’s Complaint, it alleges three of the four evidentiary basis for finding a threat  (1) that there is a high the degree of similarity between McIntyre’s former and current positions, (2) there is a high degree and of competition between IBM and Microsoft; and (3) that, IBM made strong efforts to safeguard its trade secrets. “

Lawsuits over non-compete agreements crop up from time-to-time in the tech industry, but typically they involve top engineers or high-ranking product leaders. The suit against McIntyre signals the growing significance of diversity initiatives in major tech companies.

Says Wright, “a significant difference in the trade secret allegations of IBM’s Complaint, on the one hand, and the elements of a trade secret case in California, on the other, appear to be that, here, IBM does not allege facts sufficient to demonstrate the fourth prong of the USTA claim; that McIntyre and Microsoft ‘lacked candor’ in  the transition and that they have shown a ‘willingness to misuse’ IBM’s trade secrets.  Instead, IBM alleges her future disclosures may be inadvertent.  According to IBM, it may be that McIntyre isn’t a bad actor, it’s just that her violation is inevitable given her knowledge and position.”

Wright adds that “IBM’s use of the Complaint as a deft advertisement of its own diversity success (pointing to McIntyre’s company-critical strategic business responsibilities as a case in point), while simultaneously trashing the diversity score of its chief competitor, could be an opportunistic add-on to its current recruitment strategy.”

Although non-compete agreements are prevalent in the tech industry, and disputes over them aren’t out of the ordinary, some experts in human resources law told GeekWire that it was unusual for a company to enforce non-compete deals over a role that wasn’t tied to a core product or business.

A settlement between IBM and Lindsay-Rae McIntyre was reached on February 25, according to the filing in U.S. District Court in New York. Terms of the settlement weren’t disclosed, but Microsoft said in a statement this afternoon that McIntyre will be officially starting in her new position this summer.

A SHRM article from November 2017 notes: “No one disputes a company’s right to protect its proprietary information. But when considering whether to use these restrictive covenants, you’ll need to carefully balance the company’s business interests against your workers’ right to move freely from job to job—while keeping in mind the many state laws regulating the use of noncompetes.”

A non-compete is not an employee retention tool. An employee non-compete agreement is a company protection document and mechanism pure and simple just like signing your employee handbook acknowledgment. Non-competes do not guarantee that if used in good faith an employee will stay loyal to a company and not destroy the company from the inside out.