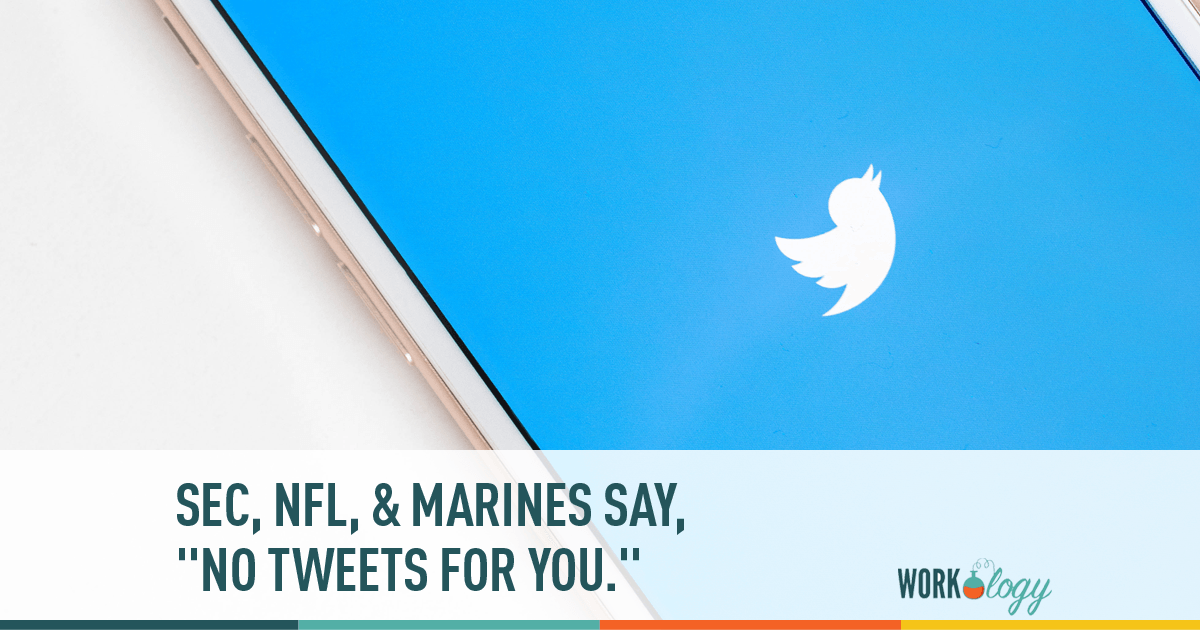 First the NFL, the Marines, and now the SEC.  Is your company next?

What a difference a year makes.  Twitter and other social media platforms like Facebook and Friendfeed have grown at an enormous rate over the last 12 months.  According to Quantcast, a website quantifier, there were 26.5 Million Twitter users in the United States in June 2009 compared to a little more than 2 million users in June of 2008.  Last year these sites were not even on the radar screen of company executives, professional sports teams, and others.

The NFL has had an existing policy barring the use of PDAs and cell phones by its players and as of July 2009 had begun enforcing a social media policy banning players from using social media platforms during training camp, practices, and games.  The policy has resulted in several fines although it has not been finalized but that hasn’t stopped the NFL from enforcing their policy.  According to the Associated Press, the San Diego Chargers fined cornerback Antonio Cromartie $2,500 for complaining about the food at training camp on his Twitter account. Cromartie linked the quality of the food to the Chargers’ failure to reach a Super Bowl.

The Marines issued an order also earlier this month banning their soldiers from social media sites like Facebook, Twitter, and Myspace stating that these sites increase the risk that sensitive and secure information might be leaked or received by advisories.  And now the SEC.  The South Eastern Conference just released a new social media policy placing restrictions on how much tweeting, blogging, and video blogging reporters can do at games, practices, and news conference.  In addition, the SEC’s policy also includes restrictions for fans in the stands attending SEC sporting events banning them from using Twitter, Flickr, Facebook, blogging, or video blogging in an effort to keep fans not in attendance glued to the SEC’s preferred television network for the most up to date and complete coverage.

Can they do this?  Yes, they can try but the bigger question is how.   How does the SEC plan to police the 90,000 fans inside University of Florida’s Ben Hill Griffin stadium as well as the 100,000 tailgaters who remain outside the stadium updating their social media profiles and tweeting real time action and updates?  The Social Media Police. We’ll have to wait and see.

As these organizations try to develop a control mechanism and system to monitor and police the use of social media platforms, the rest of the world including corporate American is waiting and watching.  Corporate American Information Technology and Human Resource Departments over the last year have rushed to put in place strict social media and security policies to protect company assets.  However, what they are doing is creating a larger social media divide that could negatively impact the company’s culture and brand reputation.  Unfortunately, the very decision makers who seek to police and enforce with social media policies fail to understand the full scope and power of social media.  And even if companies block employees from viewing social media platforms on company computers, employees still have access to unrestricted internet sites using smart phones like Palms, Blackberries, and iPhones.

First the NFL, the Marines, and now the SEC.  Is your company next?

***As of August 18th, the SEC has issued a revised social media policy that includes the following:

No Bearer may produce or disseminate in any form a real-time€ description or transmission of the Event (i) for commercial or business use, or (ii) in any manner that constitutes, or is intended to provide or is promoted or marketed as, a substitute for radio, television or video coverage of such Event. Personal messages and updates of scores or other brief descriptions of the competition throughout the Event are acceptable. If the SEC deems that a Bearer is producing a commercial or real-time description of the Event, the SEC reserves the right to pursue all available remedies against the Bearer.