Sears: How Not to Save A Sinking Ship 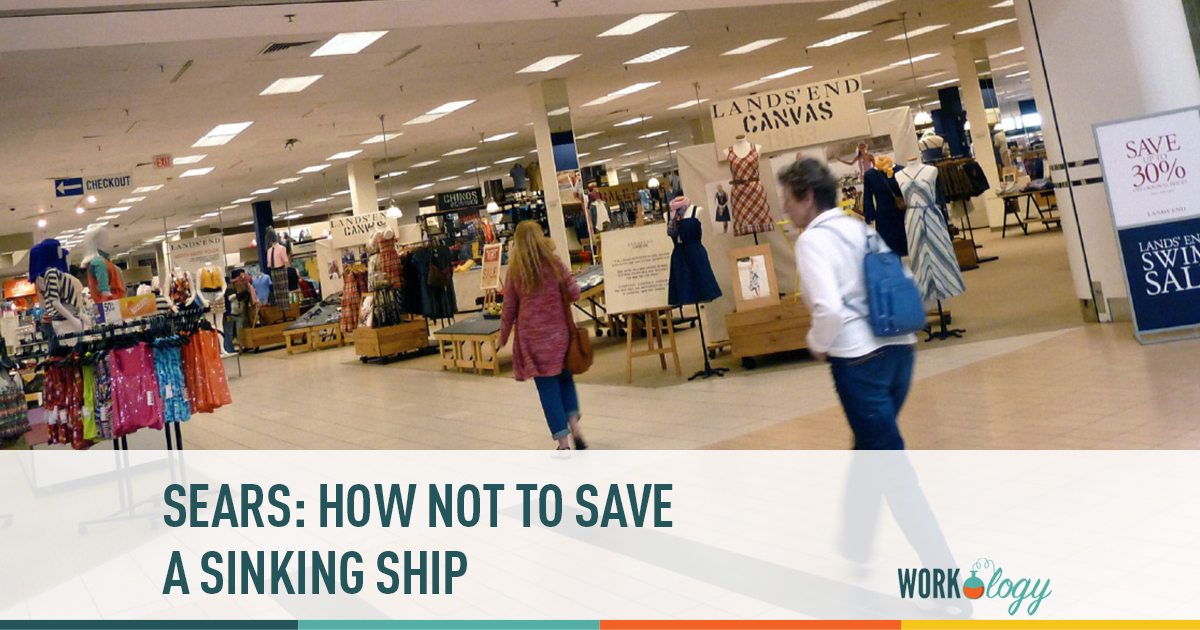 Sears Canada is in court this week trying to get approval to suspend benefits for retirees. They’ve already eliminated severance packages for full time works and drastically slashed all kinds of employee perks and benefits. This is all in reaction to Sears’ slow stumble into the depths of bankruptcy and eventual closure. Sears Canada has spent the last few years shuttering stores bit by bit, and now is looking for someone to invest in the company and bring it new life – to do that, it needs to bring down operating costs, and as we all know, the most expensive part of any organization is people.

But if people are your biggest expense, they’re also your most important investment, one that’s worth nurturing. Drastically cutting perks, benefits, and even your training programs may save you money in the short term but it won’t help you build a wining team, and it won’t help you revive a failing company.

Here’s what people are saying about Sears’ “strategy”:

This piece from last year about Sears U.S. trying to escape bankruptcy with one bad plan after another is worth considering as Sears Canada cuts benefits for workers. It contextualizes this latest move as part of an overall lack of vision and, increasingly, desperation, as the once huge retailer scrambles to stay afloat.

CBC interviewed a number of former Sears workers, some of them retirees and some recent layoffs. All of them had lost thousands in severance (or expected years of work), and all were worried that their pension would disappear entirely. Canadian bankruptcy law allows companies in trouble like Sears to pay banks and creditors first, if need be out of the pension fund, and its retirees last.

The story is the similar for employees of Sears U.S. In March, Sears Holdings revealed that there was a massive pension shortfall that put employees in doubt for their financial future. On the chopping block were, potentially, severance packages, pensions, life insurance policies and medical benefits.

Sears’ leaders, both in Canada and the U.S., say that they have little choice but to take drastic measures. Cuts to employee and retiree benefits, cuts to workers’ hours and wages, and cuts to perks are necessary to cut costs overall and make the company competitive again. But cutting the most important thing to your works – their pay – is a good way to ensure you won’t be able to retain top talent or even your hourly, frontline employees. It’s a good way, too, to sour customers on your brand – your employer brand, after all, is public and of just as much significance to customers as it is to candidates.

Just check out Glassdoor reviews of Sears Canada and U.S. to see how these changes are impacting perceptions of the company.

What the Sears situation makes so clear is that desperation makes for bad HR.