Quitting Your Job the Right Way 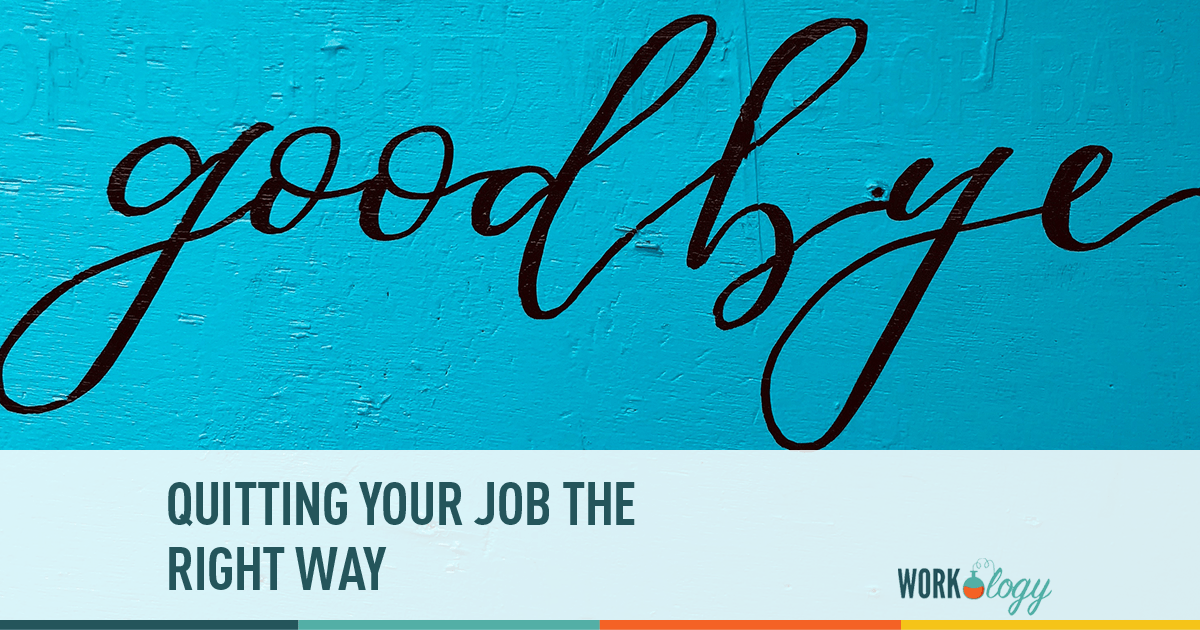 I recently made the decision to leave a career as an HR generalist to start my own HR consulting business. The idea had been building in my mind for quite some time, and I had finally reached a point where my resources were coming together to make the idea a reality. Not only was I planning to leave my job to start my own business, but I was also going to be moving back to Southern California after ten years in the north part of the state. So, in late July I took the first step toward my new life and told my boss I was leaving. Giving my resignation was a big moment for me because I knew it was what made my decision official. I also knew that the way I quit was important in setting the tone for my HR career going forward.

YouTube has plenty of videos of people finally getting revenge on a horrible boss or mind-numbing job by delivering their resignation via filmed rant, with backup singers and even with the help of a marching band. But none of those things were going to work for me. My boss (fellow Blogging4Jobs contributor Sabra Reyes) was someone I enjoyed working for, and the company I worked at was good. While the theatre geek in me liked the idea of a dramatic departure, I knew that a resignation worthy of a viral video just wasn’t the message I wanted to send.

In today’s post, I will share my own story of leaving my last job and how to not just quit a job, but how to quit a job well.

I stuck with the traditional method of giving notice. I wrote a letter of resignation, and I delivered it by hand. There were no marching bands or flash mobs; it was just a conversation between my boss and me. It was a hard conversation to have because, as I mentioned, I like my boss, and she has been supportive during my time at the company.

Conventional advice is that you give at least two weeks’ notice when leaving a job. And sometimes that is the most you can give when you have a new job waiting for you. But in my case I was leaving to work for myself, so I had some time and made a point of giving four weeks. I knew this would allow time to train others in the department on my responsibilities and to hand off any projects I was working on. I also hoped that I would get a few days with my replacement, so I could train that person on my job.

When leaving, take into consideration a realistic timeframe for your job. For a professional level job, giving at least three or four weeks notice is a reasonable amount of time to complete outstanding projects and hand off your work. I used my final four weeks to get managers caught up on state-mandated harassment training and to make sure all recent hires had gone through my new employee orientation. Training was a big part of my job, and I wanted to tie up all the loose ends before I left. This would give my replacement time to get settled before having to facilitate company trainings.

ASSISTING WITH THE TRANSITION

The final weeks in a job can be a challenge. I found my mind skipping ahead to my future, and it was not always easy to focus on work. I was leaving an HR department where we all worked well together, and I wanted to help my department with the transition. This meant that I had to work hard to keep my focus. It has never been my style to simply show up and collect a paycheck, so I made the commitment to continue with that work ethic. I also wanted to leave the department better off than when I started there. I did not want my departure to create a huge gap or tons of incomplete work. I remained fully committed to answering questions from employees, investigating workplace problems and providing support to managers.

Once I gave my resignation, my boss immediately started posting my job on career sites. Finding the right fit for an HR job is not always easy. Working in HR is not just about knowing labor laws and understanding policies. It’s important to find someone who is the right fit for the personality of your company. I sat in on interviews and gave my input to the team.

We finally made an offer to a candidate. She accepted and was scheduled to start a few days before my last day. Regrettably she backed out a couple days before she was to start, so I sprang to action and helped my boss with phone interviews of other candidates. Unfortunately I did not get a chance to train a replacement before I left, but I made sure to review the state of my work with the HR team.

Remaining an active member of the team until your last day is a good way to aid in the transition and to ensure that the work relationships you have built at your job will continue once you leave.

As the saying goes, it’s not a good idea to burn your bridges. When it comes to your career bridges, you never know when your career is going to lead you back to the people that you worked with in the past. How you leave a job can say just as much about you as the work you did while at a job.