Quit Fantasizing About Quitting and Burning It All to the Ground 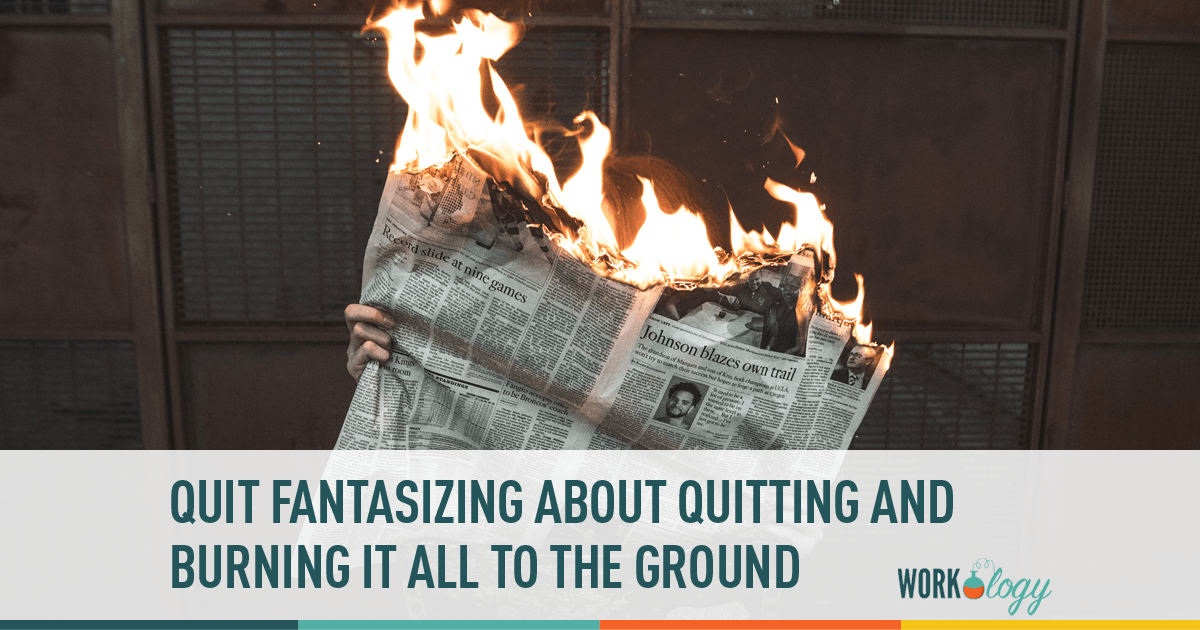 A woman won the lottery and celebrated by defecating on her boss’s desk. So the story goes. The internet reacted with cheers and/or scorn, depending on each person’s own secret dreams and resentments.

The story, it turns out, is just a story. The original report of the incident is so exaggerated you’d think it would be easy to tell it was fiction — no manager, being interviewed about such an embarrassing moment would use the words “PlayDoh fun factory” — but there’s a grain of truth to it: win your freedom and leave wage slavery behind; burn all your bridges behind you. It’s a fun fantasy.

Quit Fantasizing About Quitting and Burning It All to the Ground

We’ve all worked jobs that made us feel a little less, either through overwork or by stripping us of our dignity.

At one of my first grown up jobs I had an emotionally needy manager who made unreasonable demands on my time and heart. Not only did he expect me to work overtime week after week, without thanks, but he expected me to help him solve his work problems and coach him through problems in his personal life. Of course I resented him. Of course I carried around the weight of that resentment, even as his natural charm kept me motivated to clock that overtime and solve those problems. Of course one day I snapped.

That’s only natural, but my mistake was in snapping at him, rather than deal with the problem constructively. Perhaps I could have vented to friends, thought things through and come back to work armed with a better strategy. There are options, no matter how impossible or unpalatable they seem: confronting your manager in a more diplomatic fashion (I screamed at him, it was embarrassing for us both); talking things through with our HR generalist, who I have to admit, was a smart lady who always gave good advice; and simply being “unable” to work that overtime or do that emotional labour. Screaming seemed like the only thing to do. Not the more pleasant and more satisfying option, but the only thing to do when I felt so trapped. I won’t tell you exactly what I said, as it was unpleasant enough to be not worth sharing here and did nothing but make the situation worse for me, for him and for everyone who worked with us. But suffice it to say that I dealt with an emotionally trying workplace conflict in the worst possible way.

And so I burned a bridge.

I didn’t get fired, actually, or quit. That was the worst part of it. I really was necessary, being the only team member with my particular skill set, and so was all that overtime I was being encouraged to put in. I stayed at that job for years after, all trust between me and my manager broken on both sides, resentment building. We never managed a good working relationship again and truth be told, I left that job with few friends. Not because I’d had an unprofessional outburst, or because coworkers had turned against me unfairly, but because I let my resentment fester and that made me a worse colleague. I lost their friendship fair and square.

So, back to the made up story of the woman who defecated on her boss’s desk. It rings true because we’ve all felt ourselves to be in an impossible work situation and hoped for a miraculous escape, one that allows us the opportunity and ability to take a little revenge. In times when I’ve been stuck in a job I hated, I’ve often wasted time and energy on elaborate ways I might quit and burn all my bridges behind me. But I’ve never found that humiliation, revenge or acting out served anyone well at work — it only makes worse enemies of the ones you have, and new ones where you might not expect. When you burn bridges you burn friends too, the ones you leave behind and the ones you could have made, potential future colleagues. Potential opportunities, burn too.

Well, some of this is obvious, right? Don’t defecate on your boss’s desk when you win the lottery. But don’t seek to go out with a bang, either. Not if it’s just for the sake of your pride. There will be times in your work life where an amicable separation isn’t possible. But the discord in these situations — for example if your employer has behaved criminally or abusively — will be necessary, not for your own personal satisfaction.

Don’t burn bridges sounds like the most trite of advice when you’re angry, doesn’t it? Especially when that anger is justified. Of course, sometimes at work it is. But there are no bridges, really, just people and relationships, and it’s hard to burn just one in isolation.