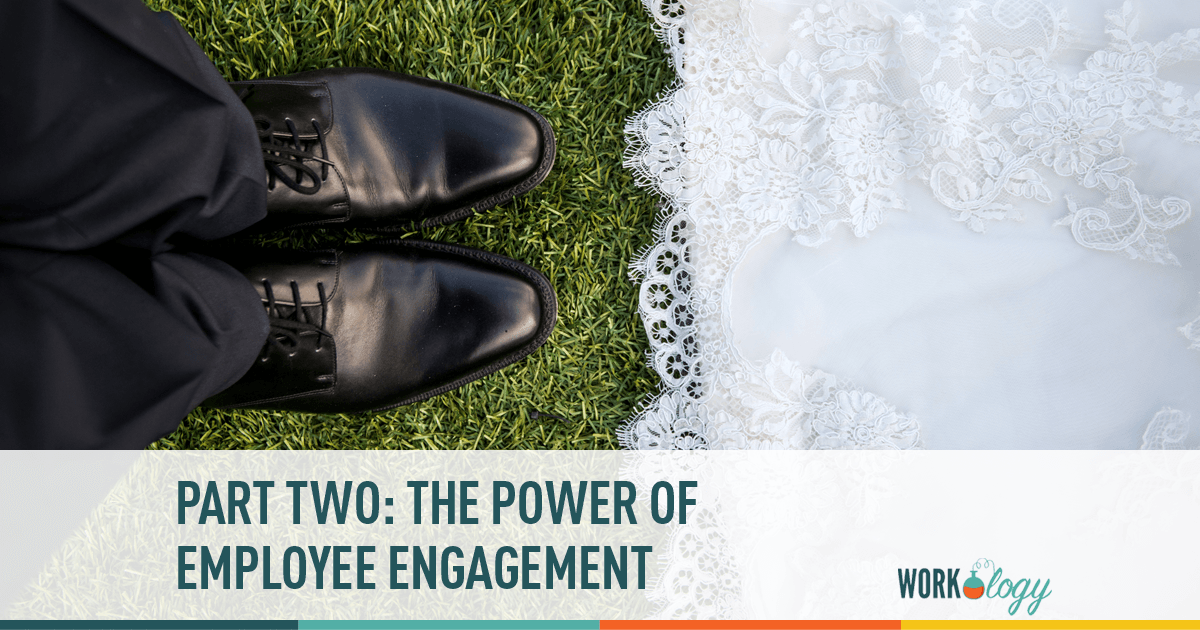 Monica Miller is currently writing a three part series over called The Power of Employee Engagement. Read the first part in the series on Blogging4Jobs.

The organizations that will increase their workforce engagement percentages this year will clearly understand every individuals part in the piece of the engagement equation. A recent Gallup report defines each individuals roles and responsibilities for assisting companies in reaching this elite status.

Take personal ownership in understanding what they want to gain from their role, align those wants with the needs of the organization, and start taking action daily to propel the company to new heights.

Move fluidly into the “coaching” of employees to build solid foundations for open dialogue between everyone. This will align the manager-employee relations and motivate each one to focus on the big picture of the companies strategic goals. And, start the habitual movements to make the goals come into fruition.

Consistently aligning corporate speak with personal actions and communicating frequently across the organization to drive the strategic direction of the business. “Walk the Talk. Talk the Walk.”

A Personal Story: Moving an Employee from Disengaged to an Engaged Status

It was the summer of 1999, I had recently moved back to Nashville after a year long contract with Motorola in Chandler, AZ. A large healthcare company’s top executive needed a contract executive assistant for six weeks while his full-time assistant was on maternity leave. This worked out well with my schedule because the company that made me a full-time offer set the start date for September.

On the first day on the job, I walked into the executives office (we will call him “Bill”) and boisterously announced my presence. Bill’s office was on the top west wing of the 6th floor, included a golf putting green in one corner, large seating area in the other corner, and a large executive desk smack in the middle of the room. Bill turned and looked at me very stoically and said, “Young lady, people are working and you need to lower your voice!” I walked by his desk, over to the putting area, picked up the putter club, and began knocking the golf ball around for a few seconds. Then, proceeded to say, “Old man, you must be somebody with this big office and that big desk with those big glasses!

Bill got up from his desk, took off his glasses, walked over and held out his hand. He formally introduced himself and I proceeded to do the same. He said, “Monica, come sit down and let’s talk about your time here this summer.” Bill talked for thirty minutes about the direction of the company, the problems that were occurring over the past several weeks, the urgency in the need for XYZ to be completed that summer, and why he had selected me from a pile of resumes to fill in while his highly trusted assistant was at home caring for her baby. Bill could have thrown me out of his office on my ass and found someone else to fill the role. Instead, he noticed someone that was in desperate need of a mentor. And, I noticed someone that needed a little jolting from his “normal” environment.

That summer, we became very dear friends and accomplished several goals that impacted the bottom line. Our manager-employee relationship started out on a trusted, no bullshit footing and it ended that summer leaving an imprint on both of our lives forever. He was my very first mentor and is the reason years later that I returned to college, completed an undergraduate degree in psychology moving out of the assistant profession into the recruiting profession. We stayed in touch over the years and the week after I graduated from college, Bill passed away from health complications. He clearly understood the power of employee engagement! And, I will forever be grateful to him for taking a chance on a feisty southern girl from a small town in middle Tennessee.

Make It the Year of Employee Engagement

The global economy shifted in the past several years and companies are having to work more strategically to stay afloat. The bottom line is strongly affected by the percentage of employees that are fully engaged in the companies strategic initiatives. Aligning all the pieces together from employee to management to leadership with all the dimensions, goals, and objectives in this article will place your company in a cash flow status year after year.

Alignment is that optimal state in which strategy, employees, customers, and key processes work in concert to propel growth and profits. Aligned organizations enjoy greater customer and employee satisfaction and produce superior returns to shareholders. Aligned companies focus employees and their work on key goals. They de-emphasize hierarchy and distribute leadership by apportioning authority, information, knowledge, and customer data. In an aligned organization, every employee – from the executive suite to the front desk – understands not only the strategy and goals of the business, but also how his or her work contributes to them.

Be the company that reengages it’s disengaged employees in 2014 and become a company organizationally aligned that are leaders in the industry!