Paid vs. Unpaid Internships: Why Top Companies are Happy to Pay 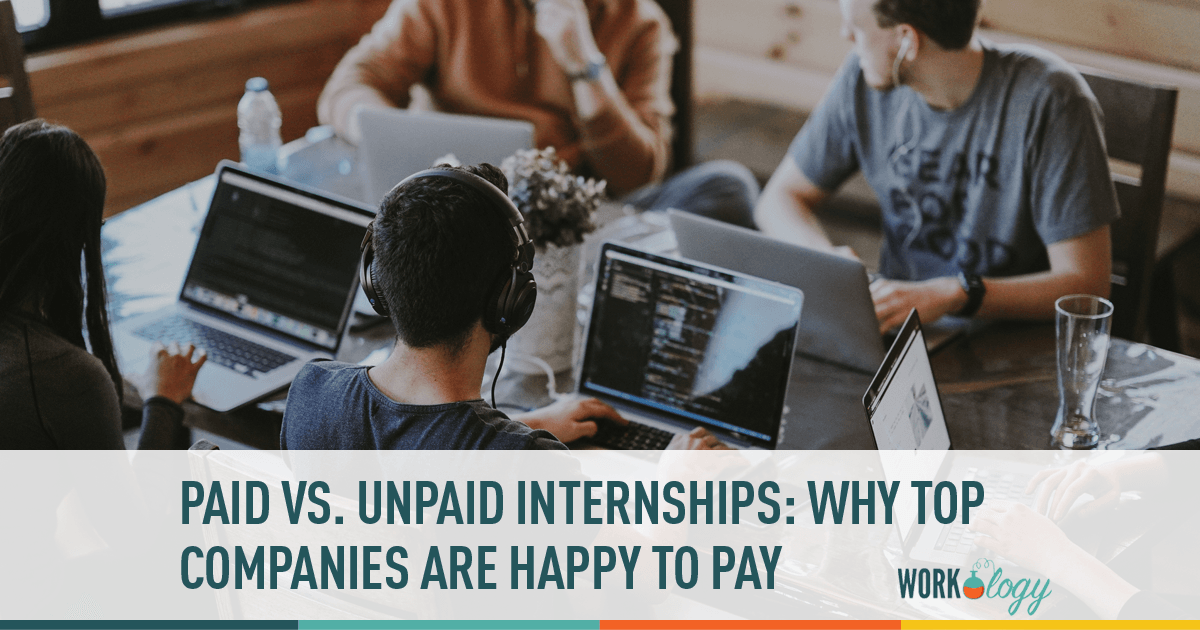 Internships:  To Pay or Not to Pay

The conversation about paid vs unpaid internships is brought up constantly.  Two of the most thoughtful posts on this subject were written by Ross Herosian at SiriusXM and Dave Olson at Hootsuite.  Both Ross and Dave run fantastic internship programs, both are customers of ours at InternMatch, however, both support quality unpaid internships.

With some surveys reporting that upwards of 50% of total internships are unpaid, including those in both Congress and in the Senate, it is worth acknowledging the difference between high quality unpaid roles, which at times can be way better then low-quality paid internships, and the myriads of other unpaid positions that are fully exploitative, and in some cases are against US Employment laws specifically the FLSA.  (read more here)

That being said, the reasons to pay interns far outweigh the rationale for not paying interns, and the savviest employers we speak to, large and small are getting ahead of the competition by growing their teams through paid internship programs. Below are the three biggest reasons we see successful companies happily paying their interns.

(As a side note, InternMatch has always paid our interns, even as a small, under-financed, 2-person startup, dating back to 2009.  We have also always found higher value this way for many of the reasons below).

Most of the companies we speak to are interested in building a diverse workforce that brings new ideas, skills, and backgrounds to their company.  Unfortunately, diverse students, particularly first generation US college students, are the ones hit the hardest by unpaid internship programs.  In this way, unpaid positions are not just bad for students, forcing them to choose between valuable professional experience, and work that allows them to cover increasingly expensive college tuition, but also bad for employers who miss out on a massive and valuable segment of the college audience.

Interns are the future DNA of your company (and the #1 way in which employers make new grad hires) so the hiring makeup of an intern class often represents the makeup of a company as a whole.

I recently wrote a piece on the 500 Startups blog entitled What Makes an Intern Hire Great including a slide stating that an exceptional intern can easily add 50K of value to your company, whereas an okay intern can easily subtract 25K in value.  While interns are often hugely rewarding, the cost of a hiring a bad intern can be substantial, from becoming a management time suck, to creating office frustration.  So, making the right intern hires is extremely important.  By substantially narrowing your pool of potential hires with an unpaid internship program you dramatically increase the odds that the intern you hire will not be the right fit.

The good news is that you don’t need to pay interns a lot to be able to hire the best. We have found that paid positions on our site will see 4 to 5 times as many applicants, even if the payment amount is only minimum wage or $10/hour.  So, when it comes to intern compensation, marginal pay increases often lead to massive talent increases.

Ultimately, the number one reason companies hire interns (over 83% as a matter of fact) is an effort to try and convert students to full-time hires.  Over 70% of interns are offered full-time jobs, but not all take those jobs.  It turns out that payment is one of the biggest determining factors of whether a student who is offered a full-time offer will accept.

CBS Interactive is a fantastic example of a company who has led the in terms of supporting strong intern compensation for all their interns.  As a result, their student talent has gone up, and the number of hires they make through their internship programs pays substantial dividends to their company for years to come.

Removing the Ethics of Internship Compensation

Leaving out the substantial ethics and ethical argument for paid internships and internship compensation, companies who serious about college hiring are all hiring paid interns, because they care about the people they work with and want to hire the best.

Read more about the paid versus unpaid internship debate and how labor and employment laws might impact your decision as a manager on which you choose. Click here.

Nathan Parcells is co-founder and CMO of InternMatch.com, a leading website to help students find amazing internships and help companies find amazing interns. Nathan is an expert on how companies can engage and retain university talent. Nathan loves speaking with HR experts, recruiters, and students about trends and challenges in college hiring, feel free to reach him at Nathan@internmatch.com, on twitter @internmatch.