Paid Time Off for Activism, Is a Real Thing 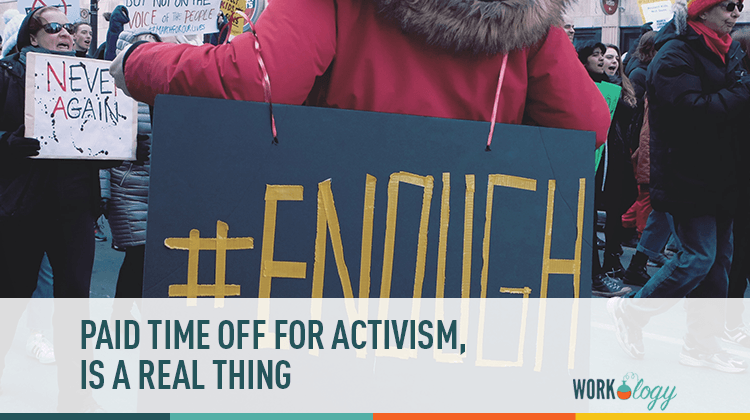 Paid Time Off for Activism

As a result, many have implemented innovative and creative ways to get and keep their employees engaged.  One of the most altruistic is by creating programs to match charitable giving and encourage volunteerism.  Some of the benefits include:

Given the current climate in our country, some organizations have taken this even a step further by offering paid time off to employees who wish to participate in political protests. In February Comcast offered its employees paid time off to protest the travel ban.  A spokesman for the telecommunications giant explained,

“Our primary focus is to make sure that all of our employees feel safe in their jobs, including while traveling,” he said. “We have assured our employees that no one will be asked to travel to a place that would result in them feeling vulnerable in any way.”

This is a growing trend in Silicon Valley, when on May Day Facebook and Google gave paid time off to protest immigration policies. Technology companies are not the only ones offering this type of leave benefit.  A San Francisco based Advertising Agency, Traction, offers two days per year for activism.

I am advocate for liberal leave policies that offer a better work-life balance for employees although I tend to favor the more general “Unlimited Paid Time Off” policy over ones that specify reasons. Studies have proven that employees who are offered unlimited leave take the same amount of time off as they would under a capped policy.  Also, the engaged employees, the ones that you want to retain, aren’t abusing or taking advantage of the benefit.

Reason-oriented leave such as Pet Bereavement Leave, Menstrual Leave, and Political Activism Leave that only offers paid time off to a segment of the employee population, has pros and cons and in some ways can be risky for the organization.

I applaud Facebook for offering all of its employees paid time off to protest on May Day. On the plus side, it showed solidarity to the 15% of employees who may be adversely affected by the current administration’s immigration policies. One the other hand, smaller segments of the employee population like the 1.5% of Black employees, may feel slighted if there isn’t a similar benefit given if they want to participate in a protest in support of the Black Lives Matter Movement.

Employees may be equally passionate and desire to advocate for a wide range of causes. They may care just as much about issues affecting women, persons of color, the LGBTQ community, immigrants, and persons with (dis)abilities.  So, organizations like Traction, who offer two days off to protest are inadvertently asking them to choose which are most important. In doing so, they run the risk of making their workforce too homogeneous because employees may only protest what is most popular amongst their colleagues or what they think is most important to the organization’s leadership.

Political activism in the workplace isn’t new.  There have long been employer sponsored PACs designed to inform employees of policy issues that directly affect the organizations in which they work.  Some organizations also offer special incentives to the employees who join and/or donate to the PACs.  What is new is how employees are choosing to be active in the political process.

Just as the workforce is evolving making way for Millennials to take the lead, so must the ways in which we approach, define, and seek to improve employee engagement. Political Activism Leave could very well be a short-term benefit aimed at addressing the current state of affairs in our country.  Temporary or not, if managed responsibly, the long term effects will be a more civic minded, politically active, and socially conscious workforce.