#OscarsSoWhite Should Have You Looking to Your Own House 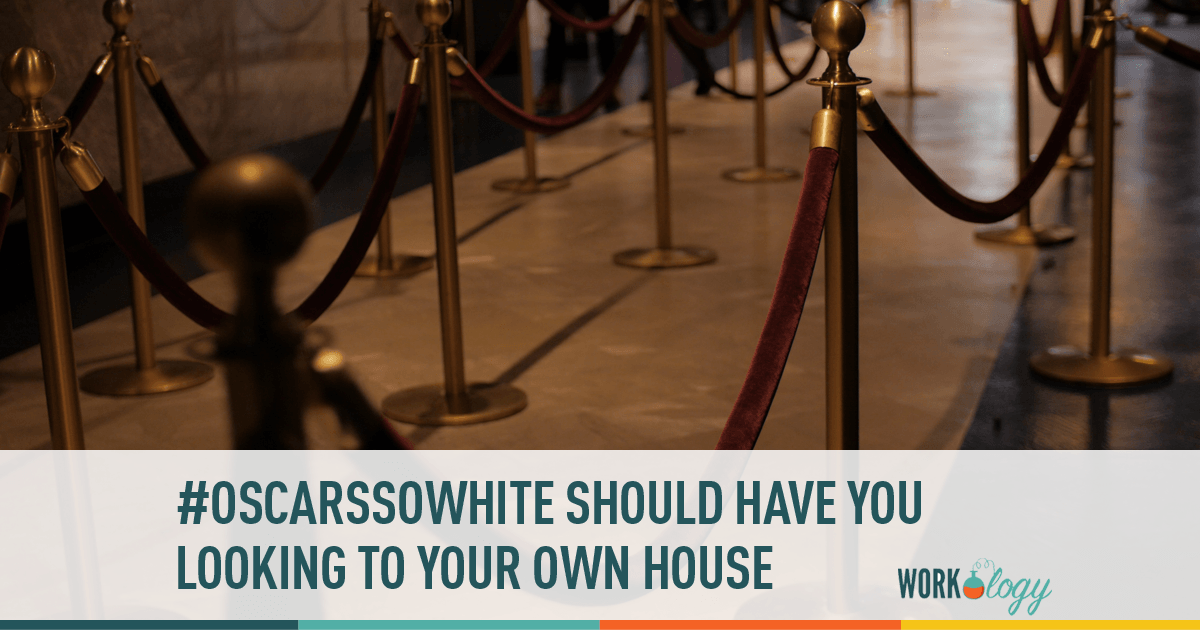 The Twitter hashtag #OscarsSoWhite started last year in reaction to the overwhelming whiteness of nominations for Hollywood’s favourite award. This year, with the slate of nominees even more uniformly white, the hashtag returned, along with blistering critiques of the film industry’s lack of diversity in front of and behind the camera. And as the awkward and embarrassing responses to these critiques mounted, #OscarSoWhite quickly turned into a full fledged boycott.

While the president of the Academy of Motion Picture Arts and Sciences – the association that votes on and awards the Oscars – has taken #OscarsSoWhite’s criticisms on board and apparently intends to implement a diversity program, the details of their plan are unclear and the Academy’s commitment as whole appears weak. With veteran actors like Michael Caine, Charlotte Rampling and Julie Delpy coming out to say that people of colour in Hollywood just need to be patient – or, in Rampling’s case, need to stop being so racist against white people – and young stars like Kristen Stewart chiding people to stop complaining and “just do something,” the outlook is pretty bleak.

Meanwhile, other industry awards, while still being dominated by white writers, directors and performers, have still managed to produced markedly more diverse slates of nominees. At the Golden Globes, Idris Elba, Will Smith and Ryan Coogler were all nominated for their work. At the Oscars, only Sylvester Stallone, out of the whole cast and crew of Coogler’s mega hit Creed was nominated, while Idris Elba’s film Beasts of No Nation was ignored, as well as critically lauded and audience approved biopic Straight Out of Compton. It’s not just that the Oscar nominations are overwhelmingly white – it’s that they’re clearly and blatantly ignoring work that is being recognized by other industry organizations, critics and audiences. It’s difficult to deny that there’s a problem at the Academy when the discrepancy is so clear.

But while Hollywood’s racial bias is made so obvious in the Oscar nominations, it’s not the case that fixing the Oscars means fixing the problem. The Oscars, Hollywood’s most prestigious award, represent the industry to the rest of us and what they have represented lately, and what the flimsy counterarguments to #OscarSoWhite have communicated so clearly, is that the problem is endemic: top to bottom, Hollywood has a race problem. Spike Lee wrote on Instagram that

As I See It, The Academy Awards Is Not Where The “Real” Battle Is. It’s In The Executive Office Of The Hollywood Studios And TV And Cable Networks. This Is Where The Gate Keepers Decide What Gets Made And What Gets Jettisoned To “Turnaround” Or Scrap Heap. This Is What’s Important. The Gate Keepers. Those With “The Green Light” Vote. As The Great Actor Leslie Odom Jr. Sings And Dances In The Game Changing Broadway Musical HAMILTON, “I WANNA BE IN THE ROOM WHERE IT HAPPENS”. People, The Truth Is We Ain’t In Those Rooms And Until Minorities Are, The Oscar Nominees Will Remain Lilly White.

If you’ve been paying attention to ongoing discussions, both here on B4J and elsewhere, of issues of diversity in tech, the c suite, and at every level in business, this should all sound familiar. Same old, same old. The tech industry has come under attack for its treatment of women, repeated and embarrassing gaffes by executives, and for its abysmal diversity numbers. Much lauded diversity initiatives at industry giants and unicorns have shown little longterm impact so far. Because, as executives and HR thought leaders are beginning to realize, dismantling and addressing inequality in the workplace isn’t simple.

Diverse hiring is only truly effective when those new hires are retained, nurtured and can explore their full potential as employees. Increasing diversity in a given industry requires more than changes to hiring and creating more opportunities for marginalized candidates, it requires changes to the candidate and educational pipeline, changes to company culture across the board, and above all, culture change – it requires that the problem be acknowledged, confronted and willingly addressed.

The issues that Hollywood faces are similar. It’s not simply that awards shows are dominated by white faces, but also that white actors are overrepresented in front of the screen, and white producers, directors, designers and editors are overrepresented behind the screen too. And most importantly, white stories, are the ones that make it through the project pipeline. Put aside the urge to claim that this is meritocracy at work – “maybe they were just the best stories” – and just think of the numbers. Is it really likely that all the best actors, writers and producers in Hollywood are white? That all the best stories are about white people?

With the #OscarsSoWhite campaign so dominant in the news cycle, you should be using this as an opportunity to look to your own house, and examine the internal biases that affect your work as an HR practitioner or recruiter. Are white people overrepresented in your organization or talent pool? Does that have more to do with the candidates and employees themselves, or with the candidate and promotional pipeline?

We know that unconscious biases of all sorts are at work in the hiring process. Recruiters tend to hire candidates who are more like them than not, more often connecting with people with similar educational and socioeconomic backgrounds – and yes, race, sex, ethnicity and creed.

We know too that unconscious bias has a huge impact on who is considered for promotions, and even how our work is perceived by colleagues and managers. These biases are so deeply ingrained in how you perceive the world and others in it, that you often have no idea how biased you really are. In a Globe and Mail piece looking at corporate programs to locate and address bias, one executive was forced to confront his unknowing gender bias.

Erick Vandeweghe, a partner at Deloitte in Toronto who participated in bias training, said he was surprised to learn that he unknowingly favoured men over women for analytical tasks. “My first reaction was one of defensiveness – I don’t do that,” he recalls, admitting that the process had made him more aware of how he selects teams and makes training decisions. “It’s a journey to make sure I am more mindful.” He says he also became more attuned to bias cropping up at meetings to discuss employee performance. For example, he says, he saw that when partners discussed an employee’s level of “presence” with clients they often favoured men, while failing to consider how a woman – or even an introvert – might exhibit different qualities in presentations, but be equally effective.

Bias is tricky. It hides itself from you and appears to be merely the truth. Racial bias has the benefit of being normative, so ingrained in our society that most white people believe ourselves to be free of it. If we’re not overtly, actively racist, than we’re not racially biased, right? Well, what do the facts say? The facts say that white people in the Western world have more wealth and are promoted faster and higher than are people of colour. White people dominate the c suite and other leadership positions, and are the majority of business owners. The facts say that recruiters and mangers alike display bias in hiring and in promotions and awards, and although we don’t have such tidy studies about Hollywood, it’s safe to say that the same bias is at work there.

Is there a lack of representation in leadership? Yes, there is, and we know why that must be.

Why does leadership look the way it does? Because those people at the top of your organization are certainly talented, but also because they benefit from the countless invisible privileges conferred upon them by race or class or gender.

Why does Hollywood look the way it does? Because those people lucky enough to make it onto the screen or behind the camera benefit from those same sorts of privileges.

Now that we have acknowledged the problem, it’s time for the tricky business of dismantling and rebuilding. What are you doing in your own work to increase, sustain and normalize diversity in the workplace?