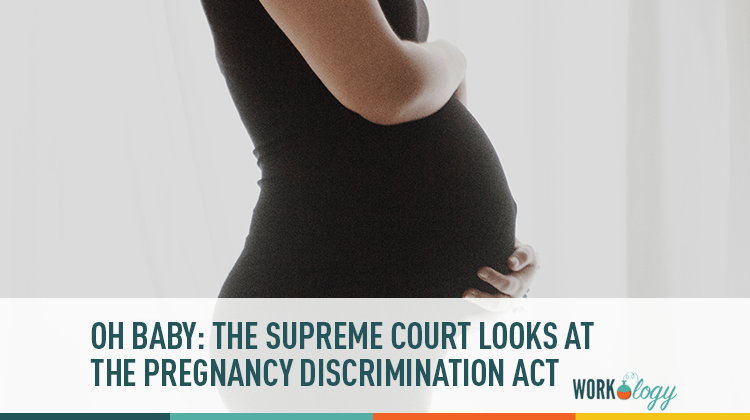 Last week the U.S. Supreme Court heard arguments in Young v. United Parcel Service, Inc. If you’re an employment law nerd and expecting a new baby like me (baby #2 due in January!), you’ve been avidly following this case since the Supreme Court granted cert. Oh, no one else? Okay, then let me fill you in a bit…

In 2006, Peggy Young worked as a driver for UPS, mostly delivering overnight letters, when she discovered she was pregnant. While Young typically was not required to lift heavy packages, when her doctor provided work restrictions that limited her to lifting only 20 pounds, she requested an alterantive assignment. Instead, her bosses at UPS told her she needed to take unpaid medical leave, because the UPS driver position required her to be able to lift 70 pounds.

It seems pretty straightforward, right? Oh wait, nope, that’s why I have a job…

The issue in Young’s case, which was illustrated by the Justices’ questioning during oral argument, is whether Young was treated differently from other workers in a similar position. UPS has argued that it did not provide light-duty work to any employees unless they were injured on the job or had a condition covered by the Americans with Disabilities Act.

Young, on the other hand, has argued the exact opposite. She alleges that other UPS employees who lost their licenses for criminal behavior were provided with alternate assignments, rather than being forced to take unpaid leave.

So what’s next for the supreme court and the Pregnancy Discrimination Act?

Since the Supreme Court granted review of the issue, UPS has changed its policy and will start granting pregnant employees light duty beginning in January 2015. In addition, the EEOC updated guidance to employers to make it clear that they should accommodate pregnant workers.

Even before the EEOC updated its guidance, you should have been offering light-duty or alternate work to pregnant employees. Quite frankly, its the right thing to do. Female employees should not be forced to choose between having a family and supporting that family.

Even if you’re unconcerned about doing the right thing, a quick look will show that the cost of defending this lawsuit far eclipses any cost UPS would have faced in giving Young alternate work. Young was unsuccessful in federal district court and the Fourth Circuit Court of Appeals, requiring UPS to hire attorneys to defend its decision at each level. Even if you’re not hiring a white shoe firm for defense, the costs could easily rise into six digits, and that doesn’t even count the cost of a potential verdict.

So, in a few months when the Court releases its opinion, remember you heard it here first.