Will Obama’s Job Search Be Harder Than Yours? 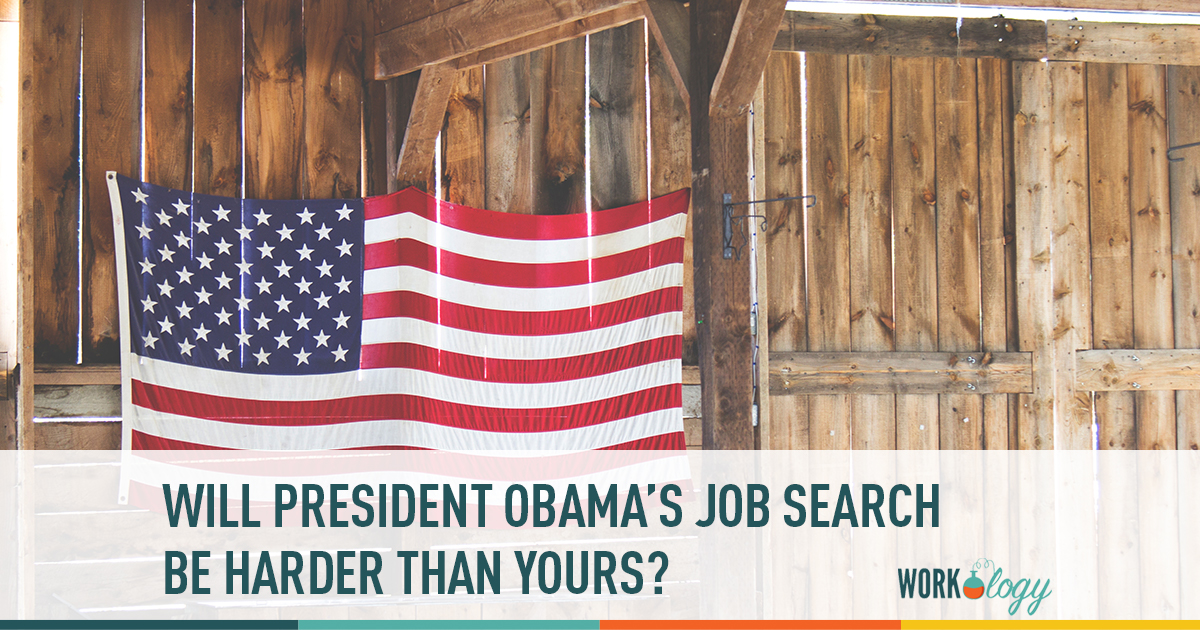 Have you ever felt like your work experience was so specialized or your job title so high level that they were holding you back from exploring new opportunities? It’s not an illusion. Highly specialized work experience (like military service) can be hard to spin for hiring managers in different fields. Education has the same boon/bane split. A bachelors and a masters degree make you a more attractive hire, but your employability (outside your academic field) can decrease with every degree acquired after that — if it’s not clearly applicable to the types of jobs you’re looking for. Likewise, once you’ve hit the executive or director level, it’s much harder to take on a role with less responsibility, even when your reason for doing so is both positive and clear (for example, taking time off to raise a family).

But if you think you’ve got it bad, think about how strange it must be for outgoing President Barack Obama, now looking for a job as a private citizen for the first time in 8 years.

The presidency is a challenging position, to be sure, and one that’s played out for all to see but that’s not necessarily a good thing. Being a recognized leader in your field is a good thing — recruiters and hiring managers are sure to know you and your work. You don’t have to introduce yourself to them and often, you don’t have to sell yourself as a candidate, either. They already know you’re good. But everyone’s had career lows as well as highs, and no matter how good we (or our social media team) are at personal branding, we can’t control what people remember more of — our successes or our failures.

We’d be hard pressed to find a hiring manager who doesn’t have a pre-conceived notion about candidate Barack Obama, or one who doesn’t know a lot, maybe even too much, about his work experience.

How You Exit Your Last Job Matters

Having at least one solid job offer before planning your exit is always a good idea, especially if you’re going to rock the boat by leaving a salty review on Glassdoor. According to The Onion, while Obama accomplished a lot while in office, he (allegedly) said in his review that “all kinds of responsibility but very little recognition for accomplishments, which definitely starts to wear on you. I ultimately don’t think I’d recommend this job to others.” Not exactly great for America’s employer brand. Thanks Obama!

Ok, Obama didn’t actually write a review of the presidency gig on Glassdoor. His exit interview and off boarding have been televised and tweeted over the course of months, and he has been dignified, gracious and helpful throughout the process. Although hiring managers may pass on candidate Obama because he’s overqualified, it would be hard to find fault with how smoothly he’s handled the transition. Another plus for him is that he’s leaving the presidency due to term limits — stepping down at the end of a contract is a much better look than a post-demotion job hunt.

What if Obama were to decide he wanted a sweet part-time gig for a few years, just something to fill the time while he decompresses from one of the world’s most stressful jobs? Would Starbucks hire him or would they consider him too risky of a hire? The problem with being overqualified for literally every job in the civilian workforce is that hiring managers and recruiters may worry you’ll 1) Become bored quickly, 2) Leave for something better in only a few months, 3) Chafe within the limits of your new, less exciting job.

Moving down the career ladder and readjusting to civilian life are two of the biggest career challenges one can face, and Obama is now juggling both — but he’s got an ally in his daughter, Malia Obama, who’s just entered the workforce with an internship with Hollywood producer, Harvey Weinstein. As a Gen Z high achiever, Malia is sure to have tips for her dad on how to tailor his resume to a workforce that changed dramatically during his term in office. Like anyone moving down the ladder or making a mid or late life career change, Obama will have to find ways to make his too-good resume work for him. Is he overqualified to be a basketball coach? Yes. But his years in the presidency have given him loads of material for motivational speeches and dad jokes.

What’s actually next for Obama? After his much deserved vacation, he’ll be busy with his recently announced Obama Foundation and setting up his Presidential Library. The Foundation is “a living, working start-up for citizenship — an ongoing project for us to shape, together, what it means to be a good citizen in the 21st century,” and is likely to keep him busy for some time.

But hey, what if he wants to try something new? Something lighter ?

Maybe he’ll take up Spotify on their offer. After Obama joked that he’d love to go work at streaming music company once he was out of office, they whipped up a job posting tailored just for him. Qualifications for the new position, President of Playlists, are highly specific: the President must have “at least eight years’ experience running a highly-regarded nation” and “a friendly and warm attitude, and a Nobel Peace Prize.” Now that’s targeted recruiting!