No Resume? No Problem for Daredevil’s Karen Page 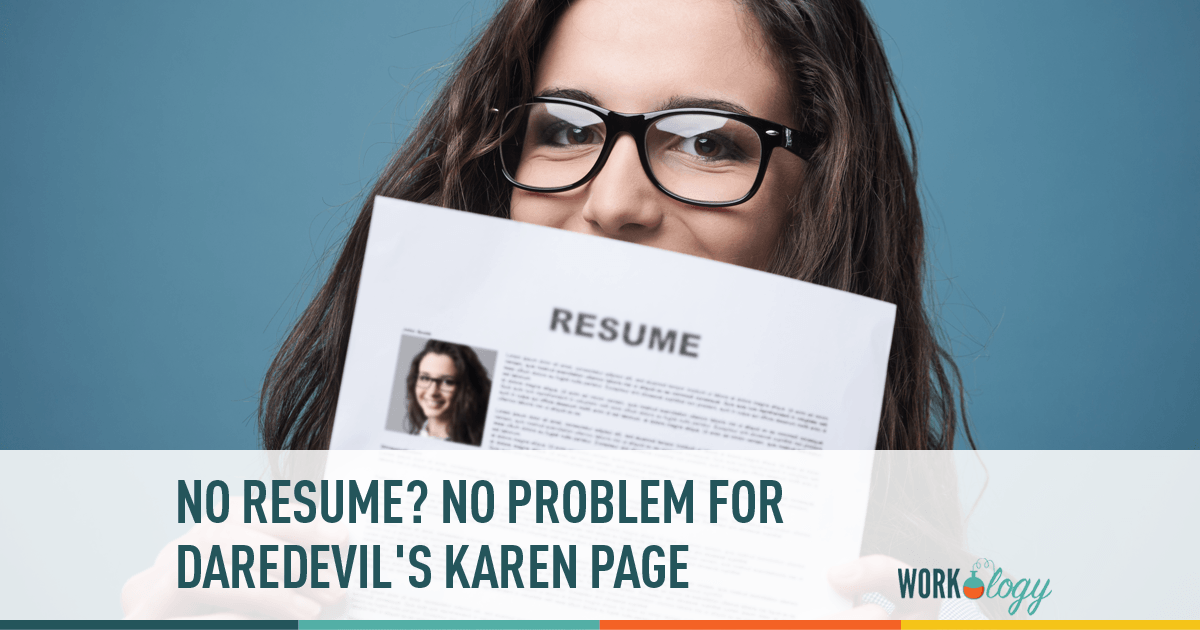 In addition to my work on Blogging4Jobs and freelance editing, I also write about popular culture at Women Write About Comics and other sites. It’s a blessing when my interests come together, as they did in my Barbie series or when I wrote about HR in the zombie apocalypse. But today there’s another crossover topic I want to talk about: employment in Marvel’s Netflix show, Daredevil. Guys. We need to talk about Karen Page.

Karen Page starts out season one of Daredevil as a client of attorneys Foggy Nelson and Matt Murdock (aka Daredevil), but by the time they’ve cleared her of all charges she’s already landed a job at their office as secretary and paralegal. In season two, after Matt Murdock’s nighttime activities as Daredevil threaten to destroy the firm (don’t start a small business with a superhero, friends, it’s a bad scene), she begins working with the city editor of a medium-sized local newspaper, and by the end of the season she’s landed a job as an investigative reporter, specializing in crime and justice. In the space of two seasons Karen goes from unemployed millennial, struggling to make it in the big city (and not go to prison), to secretary/paralegal, to reporter, all without submitting a resume or racking up a single credential.

In other words, she made two huge career leaps all based on the strength of her personal and professional network. It’s a plot point that must be infuriating to every viewer who’s stuck in a long and demoralizing job hunt, but it also hits close to home. Everyone knows someone who’s professional life just seems charmed – they skate from position to position without the arduous job search we’ve all been through; they seem to fail only in interesting ways that lead them ever upward, to bigger raises and better positions; and they always seem to be doing something cool, especially when you’re dead bored at work.

Karen’s career trajectory is both realistic and hilariously unrealistic, bits and pieces of truth mashed up with some truly ridiculous fiction. Hers is the kind of career a lot of liberal arts majors would love to have right out of college: hopping from one challenge to another without periodic stretches of unemployment and starvation, until our calling finds us, almost by accident; a manic pixie dream career devoid of resumes, cover letters, BYOB networking events and flubbed introductions to people we admire. If only we had Karen Page’s luck!

Of course, we’ve seen this distinctly middle class, blessed character type before on TV. The friends of Friends may have struggled to excel but they never had trouble making rent. The girls on Girls have their setbacks too, but Hannah, Marnie et al are never shown refreshing Indeed and Monster and gmail until their fingers fall off and their laptops catch fire. The characters find fun jobs through cute coincidences, or liven up bad jobs with unlikely successes and disasters that only make them more employable. The mundane horrors of daily life are often ironed out on TV, or ignored entirely in favour of a blank page day-to-day that’s got plenty of room for “truly living.” Sure, in Karen’s case the good life means unravelling criminal conspiracies while looking angelic in a gauzy white dress, not late night froyo and screamy spin classes, but you do you; everyone’s good life looks a little different.

What these characters typically have in common is that they’re almost uniformly middle class, conventionally attractive and, well, white. The uncomfortable truth inside the comfortable fantasy of TV employment is that for a certain segment of the population finding jobs really is easier. Karen’s career trajectory rings false more because she jumps from one dying industry to another without the credentials that both law and journalism still require, than because she didn’t send out 100 resumes and cover letters before getting hired. Do I believe that a pretty young woman who oozes a particularly Middle American, not-too-urbane, bourgeois charm could build a solid personal and professional network that could consistently produce great job opportunities? Absolutely. But I’d set that story in the tech industry or sales and marketing if I really wanted my audience to buy in.

When Karen falls into an unasked-for job with room for advancement for the second time in Daredevil‘s short run, it’s annoying, but in a way that affirms everything that makes job hunting itself so awful: the sense that pretty people do get ahead; the undeniable fact that white people with Anglo-American names do have it easier with recruiters and hiring managers; and the anxiety-inducing realization that the right connections really are everything.

The benefits of Karen’s privilege are no more evident than when she assumes her now-deceased mentor’s job, even bypassing the traditional years-long torture of cub reporters being subjected the open concept newsroom floor for his office. Ben Urich, a longtime reporter, who before his death at the end of season one had been struggling to keep his job and maintain his credibility in the face of a rapidly transforming media landscape, and a black man in a still white-dominated industry, is quickly replaced by the younger, less traditionally qualified Karen. It’s a strange moment, one that feels all too plausible, (if you disregard the absurdity of her getting her own office).

What Daredevil Does Get Right Is Tenacity

But the real fantasy of Karen’s incredible career trajectory is that it feels like a true happy accident, since her formidable hustle seems more directed at pursuing her interests – and fighting crime – than it is at finding stable employment. Yes, of course, I believe in Karen’s networking skills; but no, I don’t think career changes like that happen purely by accident, even with all the privileges and connections Karen’s got working for her. I got into university on a biology scholarship, switched majors to political science and English, worked in B2B tech sales, switched to bookkeeping, fell upwards into recruiting, and now I’m a writer and editor. Sometimes those career changes felt like happy accidents but they were also the result of networking, hustling and experimenting.

Daredevil is most on point about the state of millennial employment when it depicts both the privileges and biases that shape the workplace, and the constant battle that success requires: Karen, Foggy and Matt are fighters, it’s true, but the battleground is uneven and unfair. Karen, of course, is tenacious and her storyline is at its best when she’s shown fighting for what she wins, rather than falling into them. Nelson and Murdock too, are a fictional small business that’s most interesting when they’re struggling through career lows rather than mysteriously making rent and payroll while maintaining a mostly pro bono caseload. The struggle is much more interesting than the easygoing fantasy.