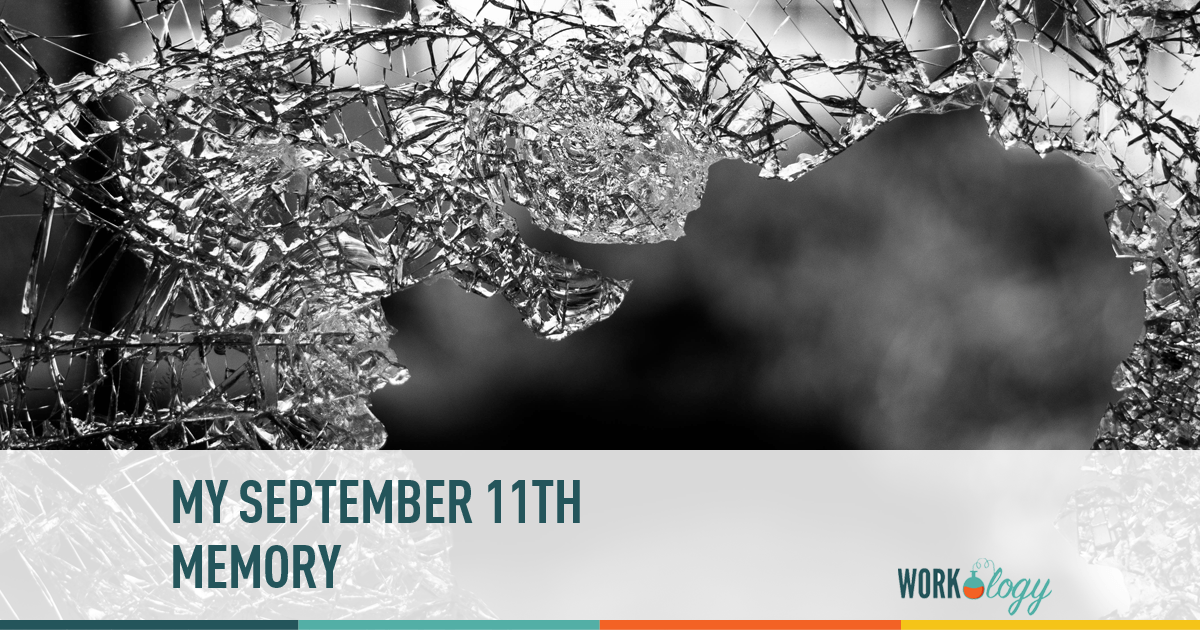 On September 11, 2001,  I was driving to Kansas City from Western Kansas to attend a mandatory work training when my cd ended and I heard the news of the second tower’s fall. My now ex-husband was just transitioning out of the military and had enrolled in college. I knew immediately he could be called back to go to war. I ended up calling my mother in law completely panicked about what might happen to her son.

The year 2001 was supposed to be a year of dreams. I graduated from college. I started my first job and began working for Target in HR. My graduation allowed my now ex-husband to leave the military, start a new life and begin his schooling. The year 2001 was the end of our dreams. It was an awakening from the nativity of youth and September 11th was really the beginning of the end for my old life. I just didn’t see it that way.

I drove 100 miles an hour back home. The rural highways and roads were eerily empty. I have never drove so fast in my entire life. I dropped off my rental car while I watched people fight over the line at the gas station. I distinctly remember people rolling around on the ground, pulling hair and throwing punches. My town as well as the rest of the world was scared and this was how they were coping.

We all have a story like this. September 11th is etched into our minds. It was a time when things were simple. We didn’t have to follow fill our quart sized baggies with liquids if we wanted to carry on luggage. There was no Facebook. We still used landlines. September 11th reminds me of that simpler time before we became jaded, less naive and more global looking.

We had Dish TV with New York City channels because my ex was a big New York Yankees fan. I sat for several hours glued to the TV crying and curled in a ball. I finally went in to work at my Target store and helped hundreds of people who were stuck at the tiny airport get food, toiletries and clothing. We all were just trying to function the best we could. I remember walking around feeling more like a zombie. I still couldn’t really believe what had happened was happening.

I remember grabbing an American flag after my shift to hang outside our duplex. I cried a lot, but I also felt extremely proud of the bravery, pride and how millions of people banded together. In crisis we found hope and that was what I held on to especially since I didn’t know if my ex would be going back to the Army.

After September 11th, I dealt with several employee questions about Muslims. There was an employee investigation I conducted where one of my employees called an Indian cashier a terrorist. It was horrible. People were scared, coping and doing really dumb things. Another employee after submitting his resignation, told a co-worker he was going to “go out with a bang.” I accepted his termination immediately.

Dealing with those issues was my first work experience in HR seeing how personal experiences and situations bleeds into your professional life. I had a host of employees who called our EAP that fall and many employees in my office crying and feeling desperate. It was a trying time.

I kept my shit together. Mostly because I was the HR lady and that was my job. Even today I secretly sometimes wish my-ex would have been re-activated. He spent months on the couch depressed and alone because he was left behind and his unit went to Afghanistan. Fighting was what he had spent nearly 10 years training for. He lost friends there too which led to guilt and lots of drinking. He was unhappy and I was his outlet. I did my best to cope. Mostly, I blamed myself and did my job working in HR. Afterall, I was the one who had graduated and took this new job. He and I were already nearly over, but it sent him over the edge.

Today I’m reminded that we all deal with stress and life situations in different ways. We put on our best face for the public when our world is falling around in front of us. It’s just not what you see. September 11th was one of those times I was barely holding it together. I know many of us were. I want to remind you that there are many more who are facing their own personal struggles due to September 11th or just because it’s life. I urge you to remember to be kind to our fellow human beings.