The Workplace Benefits of Mindfulness Programs 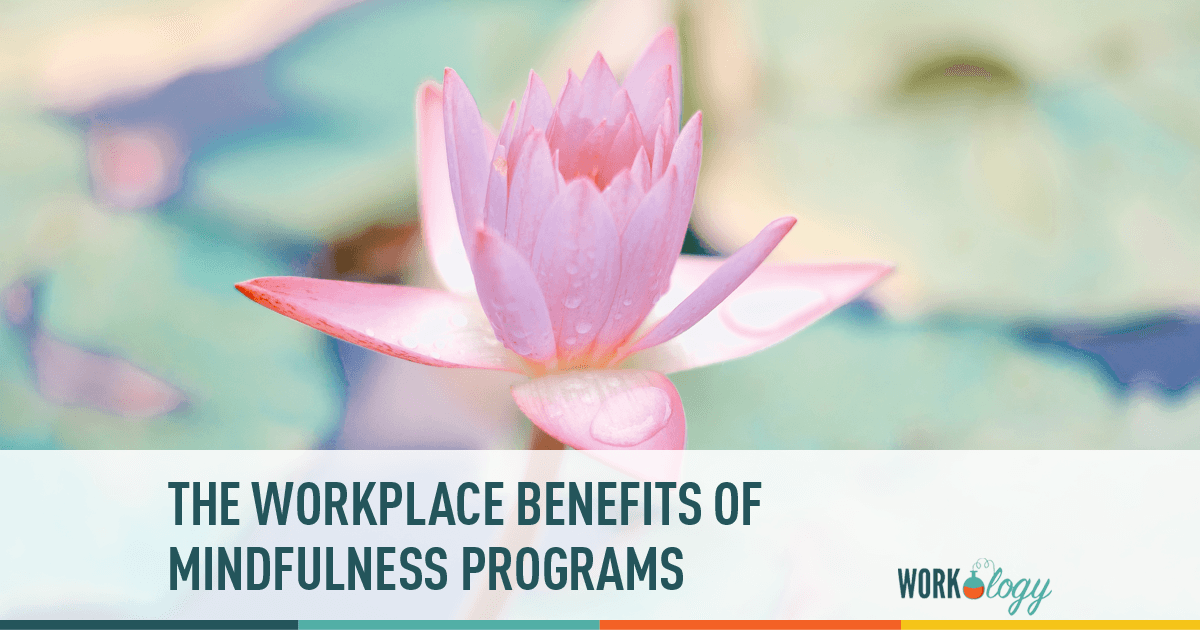 Mindfulness and meditation have seen a resurgence in the past few years in the business community and at first, it seemed like just another gimmicky seminar track. Another method for mandatory trainings, for mid-level managers to show that they are taking advantage of the “cutting edge” in workplace productivity, and for workers to become more engaged. Unlike many other buzzy programs that have been introduced in the past few decades, this one has thousands of years of practice behind it and is now getting the backing of modern science as well. Bringing a daily practice of meditation and/or mindfulness to the workplace will in fact make your workers less stressed and more productive, leading to both larger top and bottom lines for the company.

The practices of mindfulness and meditation (focusing on one thing for a period of time, usually the breath) have been criticized for trying to force a particular religious dogma on employees while it couldn’t be farther from the truth. Both of these practices are about awareness, being present in the moment, and being centered in one’s self. While just about every religion and spiritual path has meditation as one of their practices, no element of spirituality needs to be attached to it. To meditate on something is to put one’s attention towards it. If we focus on our breath, we become aware of its movement in our body and its control will steady and still our minds and heart rates. Similarly, being mindful is putting one’s attention towards the present moment, one’s emotional state and thoughts, without judgement of their merit.

Research last year out of Rice University and the University of Tulsa studied 97 restaurant workers and found that those who were more mindful in their work were more productive than their less mindful peers, even when job-engagement was taken into account.  The dynamic environment of the food service industry, while unique in some areas is similar to that of many corporate jobs. Call center employees, customer service (especially on social media where each message is broadcast to the world), everything at startups, sales. and the list goes on. Having mindful employees allows them to deal with the constant change of business with equipoise and rationality leading to greater service, happier customers, and ultimately more revenue.

Employees make decisions all the time and that autonomy keeps them engaged and performing well (autonomy is one of the three pillars of what motivates us according to author Daniel Pink). Getting caught up in emotions or the sunk-costs of a situation will often lead those employees to make poor decisions for the business (look at most major company mergers), but it doesn’t have to be so. Researchers from the Wharton School of Business and INSEAD found that a 15 minute mindfulness exercise can help employees to reduce their emotional attachment to specific directions or outcomes and thus improve the decision making process.

“The debiasing effect of mindfulness meditation in sunk-cost situations was due to a two-step process,” said co-author Zoe Kinias. “First, meditation reduced how much people focused on the past and future, and this psychological shift led to less negative emotion. The reduced negative emotion then facilitated their ability to let go of sunk costs.”

Mindfulness meditation increased the resistance to sunk-cost bias in each of the three experiments run. replicated across the organization, this process will allow companies to move much more quickly and learn from its mistakes and continue to grow.

Several experiments have shown in the past few years how race and gender based implicit biases by recruiters and hiring managers unfairly exclude people of color and women from secondary résumé reviews, interviews and general advancement within the job application process. These biases have been found across races, genders and age groups. One thing that has already helped is blind initial reviews (no PII on the résumé) and this has been taken up by a few companies and possibly even pioneered by US symphony orchestras in the 70s and 80s.

How Meditation Changes Your Brain and Body

Here’s a short and fun video about the physical effects that meditation has on our bodies.

While the research is still coming in about the exact effects of mindfulness and meditation on our bodies and our performance at work, I think we can all agree that getting everyone to act outside of their emotions more often will be a good thing. Even if you can’t get your entire company to sit quietly and breathe deeply for 10 – 15 minutes each morning, you can do this for yourself and make your workday that much better.