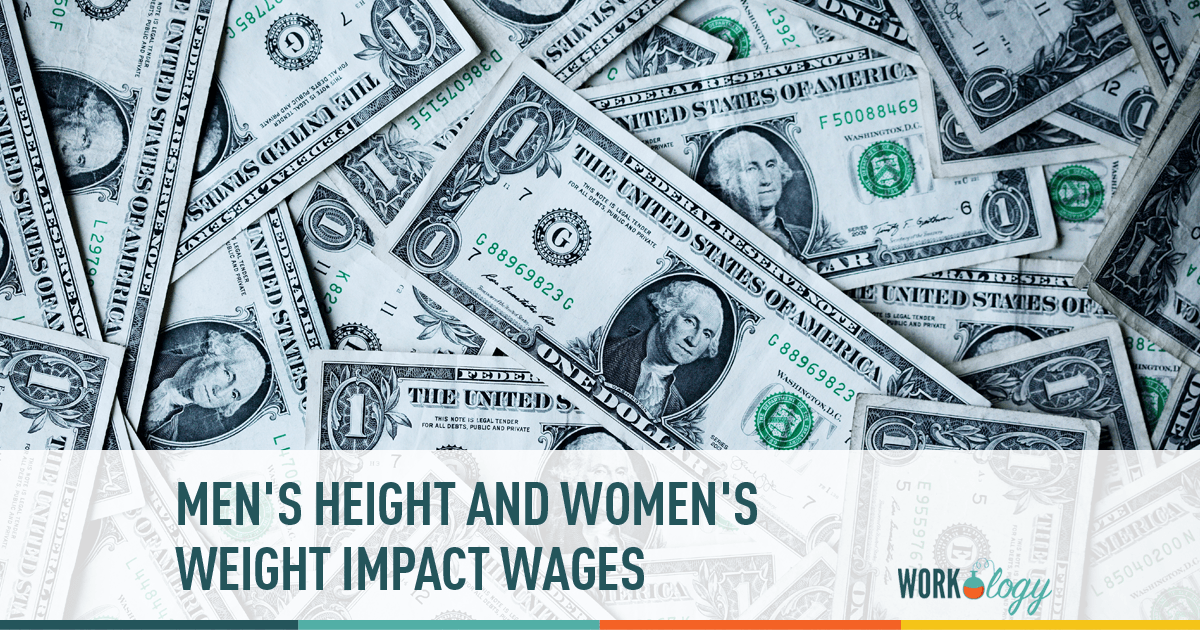 Researchers have previously studied links between genetics, economics, height and weight and proved variously that lower socioeconomic status in childhood can lead to shorter adult stature and higher adult weight, but that in some cases it all comes down to genetics, and that in some other cases genes are turned on or off due to life experiences – including childhood poverty. (It’s complicated.) But in all cases, shorter men and fatter women experience, on average, wage and advancement discrimination.

Now researchers at Exeter University have shown a clear connection between wages and height for men, and wages and BMI for women. Men’s wages dropped $2125 US with every 2.5 inches in height below the average. Women’s wages dropped $4250 US with every 28 pounds above the average. Importantly, this was a genetic study dealing in “genetically predicted” height and weight – that is, the study looked at people whose genes determined their shorter stature or higher BMI. No claims of correlations between fatness, laziness and a lack of success, please – the Exeter study results show that people are being financially penalized for factors entirely beyond their control.

Timothy Frayling, who coauthored the study told the Guardian that

“Many shorter men and overweight women are very successful, but science must now ask why we are seeing this pattern. Is this down to factors such as low self-esteem or depression, or is it more to do with discrimination? In a world where we are obsessed with body image, are employers biased? That would be bad both for the individuals involved and for society.”

What this new study does, though, is prove the lie behind these two forms of discrimination: firstly, by showing again that BMI is often determined in large part by genetics, and secondly by showing that short men and fat women are discriminated against as a group, with no differentiation for women who are “fat by choice” and therefore lazy, or men who are short due to childhood malnutrition and therefore from a “bad background.” That is, although this was a genetic not a social study, it shows clearly that these forms of discrimination have no grounds.

Of course we all have unconscious biases. But we also have the power to examine our biases and to consciously work against them. Acknowledging the ways that our socially ingrained biases affect our decisions at work – everything from who assigned to high visibility projects, to who is chosen to lead teams – is crucial to making the workplace fairer and more equitable. These two particular biases, discrimination against fatter woman and shorter men, have been repeatedly proven to exist and to have deep consequences for those affected. It’s time that we start turning things around, acknowledging that workplace competency and basic human value have nothing to do with body type.