Men Are Sneaking Into an All-Female Wonder Woman Screening 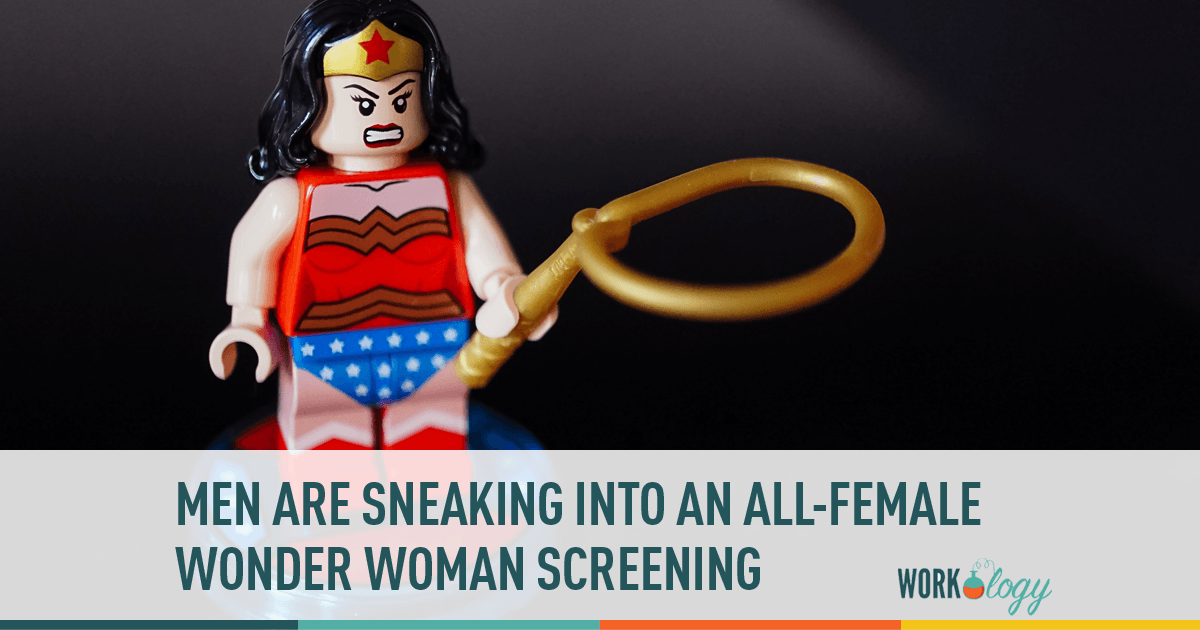 Some guys are so offended that the Alamo Drafthouse in Texas is hosting a Wonder Woman screening just for girls and women that they’re planning to sneak in. Others have stormed comment sections and social media to ensure that everyone understand how unjust this is. A screening just for women? With no men? Unfair! Some even claimed that this screening would lead to a trend of exclusionary movie screenings and customer discrimination.

Men Are Sneaking Into a Wonder Woman Screening

We don’t usually cover new movie releases here on Workology (though we do write about workplace themed games), but I think that the release of Wonder Woman is culturally significant, as is the response to it. Doesn’t this kind of chicken-little-clucking remind you of how the pay gap conversation tends to go? Or how efforts to increase workplace equality and diversity are received? The release of Wonder Woman – one of the world’s first female superheroes finally on the big screen – is revealing the same kinds of cultural tensions that we deal with every day at work. People who don’t care about equality and inclusion are always around to complain about initiatives or opportunities that exclude them – job posts aimed at protected classes are called discriminatory; scholarships and bootcamps aimed at getting more women and racial minorities into tech are, naturally, unfair.

It’s Not For You

What underpins this protests is a fundamental misunderstanding of equality efforts. Or, in the case of the Wonder Woman screening, people just trying to have something nice for themselves. The reasoning is this: equality means equal, right? So everyone should have equal access to everything. In an equal world, men should be welcome in all women’s groups and spaces, white people should be able to attend historically Black colleges, and no one should get “special treatment” in the form of scholarships, support groups, or even media aimed primarily at their specific demographic.

But this reasoning assumes that we are already on level playing field both in the workplace and socially, ignoring centuries (heck, millennia) of baked in, institutionalized discrimination. It assumes that everything given to others to help is something that should have been available to you. It requires that equality itself, and even empathy, is a loss of position, though you won’t catch any of these chicken littles admitting to it. It requires that you’re so used to being catered to that you don’t even notice your advantages anymore.

The Wonder Woman movie itself causes friction because there are so few films starring women, never mind films about female heroes. Girls and women are used to looking up to men, both fictional and real, as their heroes, but we raise boys to think that all media featuring a female lead is “for girls,” that real living female heroes are cool and all, but not someone they should be looking up to. An all female screening is a step farther – not just the silent cultural expectation that the film is a sop to female superhero fans, but a suggestion that men might not be able to claim sole possession of it should they want to. They can go to every other screening in the world but not this one and that, somehow, is threatening. It’s not even really the expectation that there will be other screenings they can’t attend, but more the general insult that something might not be for them.

The most common response I get from men when I write about workplace equality is a kind of wail that who knows what’s next. First it’s all girl coding bootcamps, next it’s men making a fraction of what women do on the dollar and having a harder time finding work and getting promotions, what next, what next. But I think only a small percentage of men really fear some kind of gender war apocalypse, a total reversal of their fortunes. These men don’t really fear “political correctness gone mad,” they flinch at the petty insult of not being first in line for this screening, or that scholarship. They’re annoyed at sensitivity training and workshops, suspicious of that diverse new hire and all the special treatment they must have received. More viscerally, some are infuriated by gains made by women and other protected classes in wages, and their increasing presence in some fields. Their gains must mean losses for these men and they must have come by them dishonestly. Through some new special advantage.

For all that protest over this Wonder Woman screening is a silly spectacle, it’s emblematic of greater struggles we face in the workplace, at home and in society more broadly. It is, in a away, every complaint about diversity and equality in a sad little nutshell – illogical, conflicted and powered by entitlement so bone deep the people complaining can’t notice it. Guys, just let us have this screening.