Managing Up or Out: The Underbelly of Employee Engagement 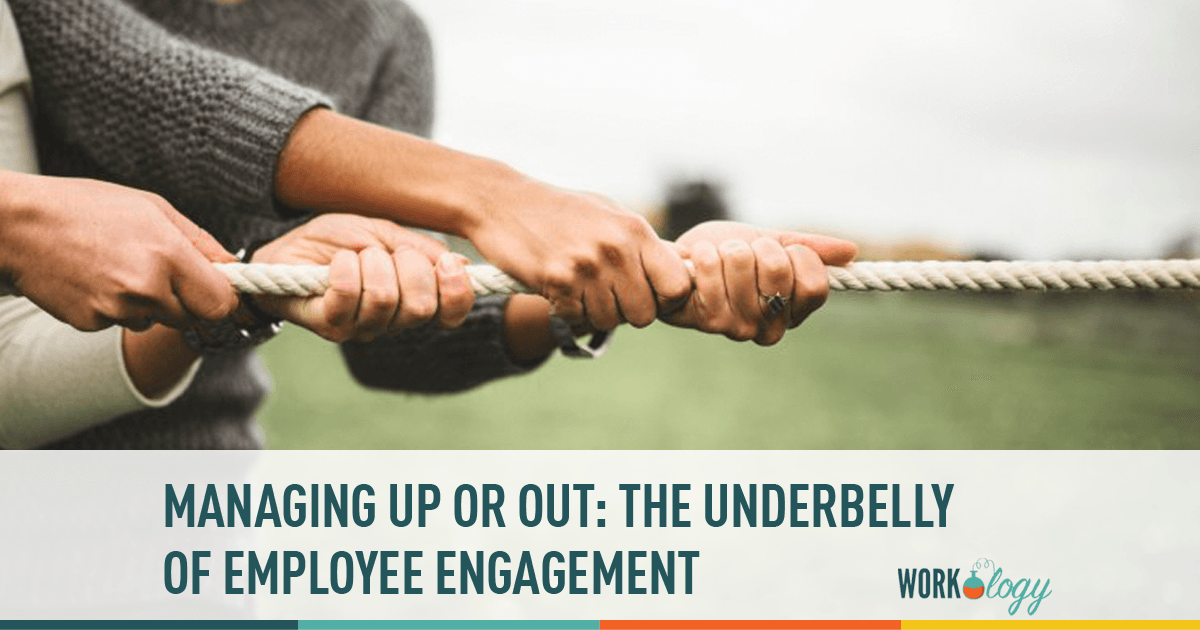 Employee engagement has received richly deserved attention for quite a few years, and the subject has now reached an interesting point of saturation. Talent industry thought leaders are no longer voices crying in the wilderness on this subject and they should rejoice in the fruits of their perseverance.

Almost all business leaders acknowledge a global skills gap. Even if it’s little more than from a supply-chain perspective, most thinking managers understand the importance of employee retention and the critical role engagement plays.

But, after the confetti has been swept up from the engagement party, work product must still be produced, which requires managing the people who produce the product. Even theoretically “manager-less” enterprises are grappling with how to handle raises and promotions.

Managing the imbalanced, the incompetent, the overachievers and the self-starters is relatively simple. The first two require good documentation and the second two require the removal of roadblocks and a good comp plan.

But, what about the middle tier? What about the talented passive/aggressive disrupter, the self-proclaimed genius, and the president’s club a-hole who happens to bring in the bulk of the revenue?

It’s the trouble-causing talented employees that require the most time and energy. And, unfortunately employee engagement theories can fall apart when you’re forced to weigh tough realities like hard-to-find skills and revenue against softer objectives like strategic vision and corporate culture.

In an era of rising expenses and widening skill-gaps, it’s easy for hiring managers to rank their employees based solely on expertise and production, while turning a blind eye to their toxic behavior.

Executives are busy and it’s human nature to put off difficult or awkward tasks. So, when an employee is uneven with the application of their talents, or when a top producer disrupts their workplace, it’s easy for the situation to be ignored and fester into something bigger.

When this happens, lack of employee engagement becomes an act of omission rather than commission. And, it’s not necessarily the problem employee who’s disengaging. Even worse, it could be the problem employee’s co-workers who disengage because they’re sick of working in a toxic environment.

Tasked with adding measurable value to a chaotic environment, it’s easy to see how managers can ignore these problems until it’s too late. But, the opacity created by ignoring the obvious can eventually ruin a career, a department and sometimes even an entire company.

Transparency Begins in the Interview

There’s no silver bullet for managing talented, yet problematic employees. But, what’s sure to never work is pretending there’s no problem and not addressing issues in plain language, early and often.

And, by early I mean during the interview. Hiring managers must clearly articulate the company’s mission and culture to effectively screen and set expectations for candidates.

“Hiring for humility” is a popular concept and probably has as many definitions as people who say the words. But, when I hear the phrase I think of emotional intelligence, empathy, curiosity and a confident eagerness to learn. Humble people are coachable and ready to follow good leaders.

Asking questions in the interview that identify these traits while transmitting clear expectations of cultural fit is just as critical to future employee engagement as matching skills with tasks.

When conversations about cultural expectations are frank and transparent from the beginning, it makes it much easier for hiring managers to refer to them with ongoing tune-ups throughout the employee lifecycle.

And, those touch-points don’t have to be heavy and awkward. They can be as easy as reminding people there’s no time to waste on drama and political games. Then when the games inevitably crop up, dialogs are simple reminders of what’s already been said instead of something new and unexpected.

If these cultural expectations aren’t set during the interview and a candidate is screened only for skills, future conversations might be harder or they might be so awkward they never happen. That’s the trap hiring managers fall into when dealing with an arrogant, non-communicative employee. It’s often just easier to focus on other tasks.

Out With the Profit Suckers

None of this should be confused with the natural friction created by a fast-paced, agile work environment. By definition, creativity, debate and decision-making generates emotional heat.

What I’m describing here isn’t creative friction. I’m referring to employees who cause business outages. They cause disruptions in communication, learning, and deadlines. They kill innovation and restrict teams from meeting their full potential.

If you’re confused about the difference, see this handy HubSpot flowchart. Great companies screen these people out or root them out later if they sneak in because they siphon off innovation and profit with their bad deeds.

Maintaining the courage (and the candidate pipeline) to move employees up in responsibility or out of the organization is critical to fostering employee engagement and meeting growth and profit objectives. If you’re held hostage by jerks, regardless of how talented they are, it just won’t work.

But, it requires ongoing sourcing and recruiting efforts from hiring managers, who require strong employer branding with a clear mission and cultural expectations.

And, that all has to be transmitted to candidates up front to screen for the right cultural fit as well as a skills match, so ongoing reminder conversations are natural, frequent and clear.