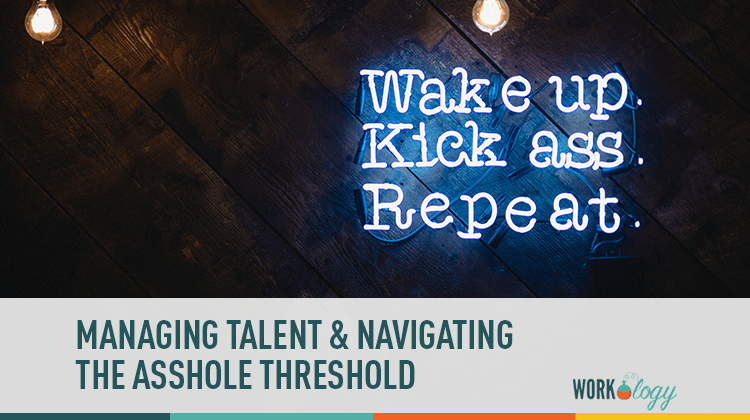 There is a phenomenon occurring in the talent and technology spaces in the war as well as battle for managing talent.  As companies are experiencing challenges in hiring top talent, they are forced to compromise their own integrity and company culture in favor of the Asshole Threshold.  This threshold was described during a session I attended at SXSW 2012 called “Rockstars and Roadies.”

Companies in the technology space, especially within the startup community are battling to keep productive employees.  This phenomenon is not a new one and is a question that most businesses struggle with.  It’s one decision that the Indianapolis Colts also recently struggled with opting to cut the ties with their rock star quarterback, Peyton Manning (Exhibit A) in favor of a new, inexperienced, untested talent in the 2012 NFL Draft.  Manning was also the top pick in the 1998 draft.  This rock star has a Super Bowl Championship ring, has been named MVP and is considered the NFL’s most marketable player holding a slew of company endorsements and television appearances.

The decision to cut Manning from the team is likely a money decision and is a common decision by companies when evaluating the benefit of retaining a rock star employee.  Their performance and reputation dictates a high salary, but they get the job done and with mind-blowing results.  Unlike roadies who are considered Steady Eddie’s.  They are the average employee with an average salary and are someone you can rely to get the job done, nothing fancy but stable and mostly workplace drama free.  Maybe the roadie can get you to the playoffs but not to the big game.  Except that sometimes these roadies can surprise us, and that’s what really motivates us to take a player lower in the draft, invest our time and effort in the hopes that they’ll do more than just okay but become amazing.

Managing a rock star is far from easy which is where the Asshole Threshold comes into play.  This is where the cons outweigh the benefits to employee that rock star.  Their antics, tirades, requests, and drama cross the line.  Managers spend more time handling the rock star than their roadie counterparts, increasing the tension between them.  Combine this with the fact that many rock star salaries far exceed that of their managers leading to anger, hostility, and an unwillingness to work with the rock star who makes more by doing less.

In short, the asshole threshold is similar to what I consider the point at which their attitude and actions outside of their performance begin to provide diminishing returns.  Enter exhibit B, Tim Tebow.  We are spending more time and getting less or maybe that new rock star hire you just snagged makes your former rock star look like a dud.  And so Manning signs with the Broncos and Tebow exists and is traded to the Jets.  The law of diminishing returns fits in nicely with the Asshole Threshold.  The drama and added hand holding and fire putting outing offers a lower per unit returns.

The Asshole Threshold and Model of Decline Explained

Scientists, specifically physicists tie this phenomenon to Joseph Tanner’s model of decline.  It is based on the idea that civilizations (or this case rock stars) attempt to counter the effect of declining resources by creating more complex structures (AKA workplace drama and more work). That strategy fails to bring the desired results because of the diminishing returns of complexity.

When discussing a sport like football, one can assume that increased levels of performance directly correlate with salary increases, it’s the Asshole Threshold that creates the chaos, sleepless nights, and gray hairs for managers, leaders, and even fans everywhere.  Beyond the threshold is simply where the manager, owner, or human resource person has had enough.

In addition to the Asshole Threshold which is pictured above, you also see what I call the “Roadie Quadrant.”  That is the performance level where an employee or person is productive, effective, and mostly drama free.  The panel referred to these individuals as Roadies and from the diagram you can see that their performance is average with the potential to increase while drama levels remain at the low end of the scale.

The asshole threshold appeals to me as an HR professional for a number of reasons, but mostly I finally put those pricey and lame college economics classes to use. Mom would be so proud.  Don’t sweat, I’ve witten about economics topics before on this blog with the Dry Powder Theory and even the Gartner Hype Cycle.

Is Navigating the Asshole Threshold Worth the Talent Technology Risk?

So the question bears where is your asshole threshold?  When does a rock star employee cross the line from being an liability instead of an asset?  Is it worth the risk to hire a rock star in the turbulent and super competitive war for technology talent?  Or are you in favor of hiring a team full of Steady Eddie’s, those roadies who don’t produce stellar results but get the job done none the less.