Managers vs. Makers: Developing Trust is the First Step 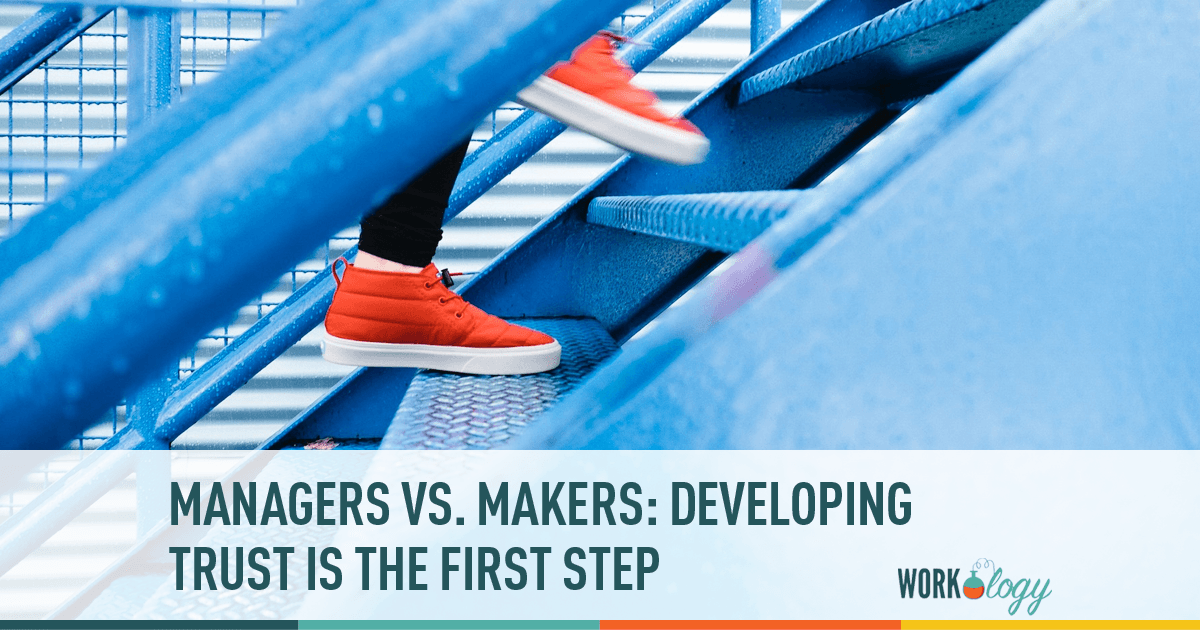 I am sitting in the conference room with pen and paper, waiting for the vaguely titled meeting to begin. Most of the other members in my office will not show up till 10am on the dot, or a few minutes after. (To be fair, I’ve started showing up late more and more because I know everyone else will, and why waste my time?) One of my colleagues shows up, sits down, stands back up, mentioning something about getting coffee. The next one leisurely strolls in at five minutes past. I already know they will need to leave at one point to get a pen and paper. The previous colleague returns with their coffee. They set their cup down, then go to their office to grab pen and paper.

You get my point. The meeting officially “starts” about seven to ten minutes after the start time. Not a big deal to some, especially those whose work can be done in short intervals. The meeting organizer briefly overviews why we are meeting. Someone’s phone goes off. Someone else shows up via conference call. It is only 10 minutes into the meeting, and already, I am like this:

Let’s just cut to the conclusion of this hour long meeting: we will meet again now that we spent an hour going over the point of the first meeting. By the end of this waste of time, I am at this point:

This is what inefficient meetings feel like if you are someone whose role in a work environment is to be a maker.

In Part 1 of this two-part series, I will overview what it means to be a maker and how that differs from manager time and explain the importance of developing trust in order to improve communication between makers and managers. Part 2 will provide strategies for developing the trust and support needed for this.

In this 2009 article, Paul Graham, a computer programmer and writer, makes a distinction between maker’s schedules and manager’s schedules. Makers, in Graham’s article, are computer programmers, but maker could include anyone whose work includes making, creating, and producing products and services. Makers require long stretches of time in order to properly perform the deep, creative thinking and problem-solving needed for their work roles. Manager’s time is usually divided into intervals of thirty minutes to a single hour and involves communicating with various groups of workers and a variety of administrative tasks. Because managers are usually the ones who structure organizations, office schedules tend to reflect their time – days divided into hourly intervals, often with meetings scattered throughout.

Graham argues that makers “generally prefer to use time in units of half a day.” Let me use an example from my own life. When I sit down to work on a creative project such as writing an article, creating content for an online course, etc., it usually takes me at least 15-30 minutes just to get into an optimum work zone (or “flow” to borrow from the research of Hungarian psychologist, Mihaly Csikszentmihalyi), and to get completely absorbed in the task at hand so I can produce my best work. Then, I usually need to work in stretches of time with minimal breaks. I have tried things like the Pomodoro Technique, but that still disrupts my flow. Though, I do find the Pomodoro technique helpful for when I have to complete managerial tasks, but when I am in making mode, working in hour intervals with short breaks is ideal.

Everyone varies to a degree, but we probably don’t vary quite as much as we like to think. See the following bell curve example of energy levels during the week from Tony Schwartz’s, Jean Gomes’s, and Catherine McCarthy’s book The Way We’re Working Isn’t Working:

I tend to go into Monday with a lot of energy and begin to peter out by Wednesday, but the curve is still generally true for the traditional Monday to Friday grind. Further, like many people who prefer work that involves making, I am introverted which means meetings are doubly draining for me and can be downright demoralizing. Sounds dramatic, I know, but let me turn to Paul Graham again to neatly sum this up:

“I know this may sound oversensitive, but if you’re a maker, think of your own case. Don’t your spirits rise at the thought of having an entire day free to work, with no appointments at all? Well, that means your spirits are correspondingly depressed when you don’t. And ambitious projects are by definition close to the limits of your capacity. A small decrease in morale is enough to kill them off.”

As a maker, all I can say is cheers to Paul Graham for this little nugget of insight.

When I see an entirely open workday on my calendar, I am elated by the idea of a day of uninterrupted creative work. If my day is booked with meetings with short bursts of open time in between, I am already wondering what sort of mind-numbing administrative work I can use to fill those gaps, because I know creative work is just not going to happen. In fact, when a supervisor recently asked me if I had interest in moving up to a more administrative role, I admitted that looking at their schedules confirmed for me early on that I did not want that, at all. I would rather hang out with Hannibal Lector than do that.

So, what can be done to reconcile these very different orientations towards work? Well, we need to start with trust, first and foremost.

Trust Between Managers and Makers

When managers and makers share mutual trust and respect for the roles that each one fulfills, a truly symbiotic relationship can result and meaningful and quality work can be created. However, because managers and makers often work on very different schedules, their orientation towards work can vary significantly and lead to disastrous misunderstandings about the nature of each one’s work.

Since managers are often oriented towards work that is clearly divisible in hours and minutes with strict timelines and pressure usually coming down from administrators above them (who are even farther removed from the maker’s work), the creative thinking process needed for making can seem like an unnecessary indulgence. As any maker or creator knows that, more often than not, your best ideas come to you at the most inopportune times: stuck in traffic, singing in the shower, waiting in line at the post office, etc. Creative thinking is rarely linear with clearly divisible boundaries of time. Further, because of this, creative thinking is not something that can be neatly scheduled and documented into something like “9am-10am: Creative Thinking.” That doesn’t mean there aren’t techniques and strategies that makers can utilize to make creative thinking more structured and habitual (which we will get to in Part 2), but the very nature of creative thinking requires pushing boundaries of conventional thought. Fortunately, this is where managers can do their best work with and for the makers on their teams.

During the process from conception to final product, a manager’s most important role is to support their team. A manager has to be tuned into when a maker is genuinely wasting their time fretting over unnecessary variables and/or focusing more on perfection at the expense of completion. They also have to be tuned into when taking restorative breaks can benefit the maker and the final product that they are supposed to be producing. This is a delicate balance that is hard work for anyone, and something makers should have respect for because in a trusting relationship, a good manager can guide and mentor a maker towards meeting not just product deadlines, but also towards meaningful and fulfilling work. When the maker becomes lost in the details of their work, the manager can be there to gently remind them of the big picture.

Once the groundwork for trust is laid, then managers and makers can work together to work as efficiently as possible.

In Part 2 of this article, I will provide strategies for managers and makers to support one another.

Jenna is a writer, editor, and communication specialist who has been working in the education sector, in multiple capacities, for over twelve years. She writes on a range of topics from pop culture to creativity and learning.