**Updated** A Get Over It Guide to Transgender in the Workplace 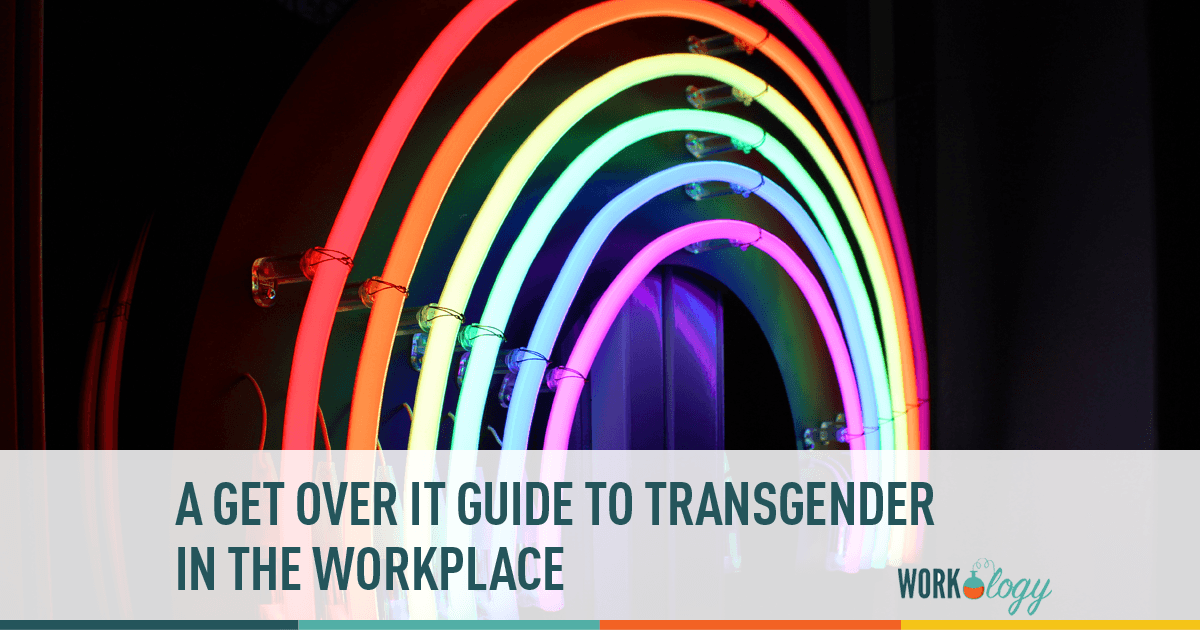 Male to Female Transgender in the Workplace

Self expression and being authentic in life and at work are trends that are only likely to continue.   Last month the state of Massachusetts signed into law forbidding discrimination based on gender identity to anyone seeking housing, employment, or post-secondary education.  Also earlier this year (April 2011) the state of Hawaii signed a transgender workplace protection act into law.  Meanwhile California presented a cross dressing protection bill also in April of this year.

Bottom line. . . the times they are a changin’.

In HR and the world of work, I’ve had my share of uncomfortable and unpredictable workplace conversations.  From topics of sleep apnea causing sleeping on the job and performance related problems to employees requesting bereavement leave to mourn a furry friend, the random poop smearer in the men’s bathroom, to the day I had one of the most uncomfortable and controversial conversations I will never forget.

Sam walked into my office hunched down not looking me in the eye.  He was clearly nervous and uncomfortable but like most employees who arrive at HR’s door, he had a question to ask and a story to tell.  Sam [whose name has been changed] began by asking about our leave of absence and time off policies then moved on to several unrelated questions regarding our company health benefits.  He was clearly beating around the bush so I asked the question, “Is there anything else you want to talk about?”

He told me how he made the decision a couple weeks ago to begin the long process to go from man to woman.  The decision and transformation involved not only surgery but months of therapy and hormone treatments as he would prepare for the change to transition from male to female – Sam to Sandy.

In the early 2000’s, the topic of transgender in the workplace was a relatively new one, but it didn’t make it any less important as Sam, myself, my store manager, and my VP of HR began to formulate a plan.  Keeping the lines of communication open with Sam, and our small group, we worked to make him feel comfortable every step along the way.  We discussed his comfort level with when and how he wished to inform his co-workers and if he felt comfortable sharing.

Sam was a relatively tenured employee and was eligible for FMLA.  He was liked, respected, and completely terrified, but I, along with my team worked to support him regardless of our own personal beliefs and beliefs of others to help him along his personal journey transitioning from male to female.

In 2008, I met a woman who touched my heart as she shared her story of how her own HR Manager led a campaign of hate sending out a company wide email alerting company employees to the woman’s new name and bathroom arrangement.  Outside of a single conversation nothing had been discussed.  She was mortified as I was mortified for her while ashamed of the very profession where I’ve worked.

Supporting Transgender in the Workplace

Conversations around transgender are delicate, uncomfortable and unfamiliar for your employee who is undergoing the transformation, the staff, and in our case, customers in a retail setting where Sandy worked.  When faced with an employee who is undergoing a change like this, it’s important to be supportive, confidential while keeping the lines of communication open for everyone involved.  As Sandy went from Sam to Sandy, you are right to think we had our share of questions each one addressed individually sometimes with Sandy alongside and other times addressing simple questions like, “What bathroom will she use?” or “What happens if I accidentally call Sandy, Sam?”

In the end, Sandy was embraced just as she was before but not without a few bumps and raised eyebrows along the way.  The key to our success was by creating not only a culture where employees are comfortable to ask questions but also accepting of one’s differences starting from the way in which our store manager set the tone to interactions from influential employees as well as customers.

In the end I was extremely proud of Sandy for her decision because it takes guts to stand up and be yourself.  It takes courage to be the person you were meant to be.

**3/5/12 Update.  Here’s a great Transgender Toolkit that was recommended to me by my Twitter friend, @1000cigarettes.

**4/27/12 Update:  The EEOC recently ruled transgender workers as a protected class under Title VII.  Wonder how this translates into transgenders and gays in the workplace especially in light of the recent case of an employee who was terminated after they liked a Gay Facebook Fan Page.

**11/7/13 Update: The Senate just passed a bill that bans gay discrimination in the workplace.

No hay conexión a internet
Posted in HR, Work